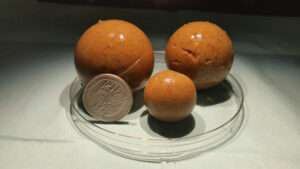 Feral pig baits have been developed by the LSU AgCenter and the LSU Department of Chemistry. The baits are soft and can be swallowed whole by the pigs, which reduces the chances of crumbs being consumed by other animals — photo by Glen Gentry

Feral pigs are a nuisance in many areas of the country, causing billions of dollars in damage. Scientists with the LSU AgCenter and the LSU Department of Chemistry are working on a bait and delivery system to help reduce the population of feral hogs.

Glen Gentry, LSU AgCenter feral hog specialist, and John Pojman, a chemistry professor, have been working for more than two years on perfecting a bait and delivery system that minimizes the risk to off-target animals.

The researchers had to look at several factors when developing the bait. One involved choosing a formula that was more attractive to hogs based on features such as smell and texture than other animals such as deer or raccoons.

“It took us two years to determine what we were going to use in our matrix,” Gentry said. “We landed on dehydrated fish. But that’s not before we went through things such as maple syrup or marshmallows.”

The researchers knew that sodium nitrite, a common food additive in products such as bacon, is lethal to pigs at fairly low levels. The problem with sodium nitrite is it breaks down when it comes into contact with moisture, giving off a chlorine-like odor that pigs find unappealing.

At first, encapsulating the sodium nitrite, similar to a gel cap, was looked at. But Pojman and his doctoral students came up with a simpler solution.

“All we had to do was raise the pH,” Pojman said. “Using some basic general chemistry and putting some additives to keep the pH high enough, we can make it so it is stable.”

A soft bait that bounces

Pojman’s doctoral students, Anthony Mai and Anowar Khan, helped develop the bait, which is round and a soft texture. When dropped from a height of approximately 4 feet, it will bounce nearly a foot. Because it is soft, the pigs can swallow it whole, leaving no crumbs for any scavengers that might come along.

Because of the unique metabolism of feral hogs, the sodium nitrite is more effective on the hogs and poses a low risk to humans.

“If the hogs eat a sublethal dose, and a hunter were to kill it and eat it,” Pojman said, “there’s no danger to them. And also, if a hog does die somewhere and predators or scavengers find it, they would not be contaminated with it.”

Even with these measures, Gentry doesn’t expect feral pigs to disappear from the landscape.

“People are concerned when some kind of new control method that’s going to come on, the pigs are going to disappear,” Gentry said. “We’ve been poisoning rats for 50 to 60 years. We still have rats.” 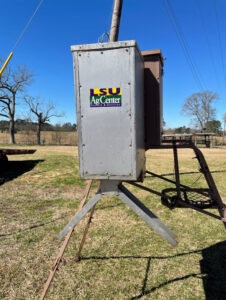 A prototype of a feral hog bait delivery system designed by LSU AgCenter scientists. The system can deliver up to 20 baits and can be activated remotely when pigs are present and actively feeding around the system — photo by Craig Gautreaux

Another part of the solution involves delivering the baits when hogs are actively feeding. Gentry has a protype that can deliver up to 20 baits when it is activated.

The system has a live feed camera installed, and a person can monitor from their home or their phone. If the camera sends an alert and shows pigs are present and feeding, baits can be released remotely. This feature would also help eliminate other species from being fed the baits.

Gentry said that the Bob R. Jones-Idlewild Research Station does have three different types of traps available to be rented by the general public for traditional trapping methods.

The traps are the Yeager Pro Trap, the Boar Buster and a wireless trapping system. The availability and reliability of cellular service will determine what trapping system will be the best fit.

The traps rent for $150 a month and come with all the necessary components, including the batteries needed to operate them.

To transport the traps, a 16-foot trailer is recommended. It takes two people approximately one hour to assemble the traps.

To rent the traps, contact Ariel Bourgoyne at abourgoyne@agcenter.lsu.edu or 225-683-5848.

Kenneth Gautreaux is an LSU AgCenter communications specialist. He may be reached at CGautreaux@agcenter.lsu.edu.