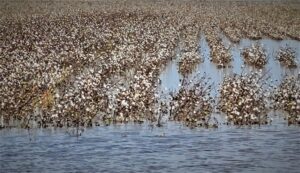 Cotton producers in the Rio Grande Valley took a devastating hit from Hurricane Hanna, according to a Texas A&M AgriLife Extension Service expert.

Other row crops like corn and sorghum were harvested before the storm arrived, but some alternative crops like sesame and citrus experienced damages as well.

Davis said the cotton crop looked good prior to the storm, and expectations were for an average to above-average season for most producers, especially if they had irrigation.

Cotton harvest was just beginning with about 2% harvested before the storm hit. Most fields were defoliated, and cotton bolls were open with a lot of lint exposed, she said.

Davis said initial assessments by AgriLife Extension experts and producers estimate 90% 100% cotton crop losses for around 138,000 acres. Some acres remain underwater due to heavy rains this past weekend.

There were also concerns about cotton seed sprout due to the moisture levels, Davis said.

“What wasn’t flooded, splashing reduced quality to unmarketable levels in mature fields,” she said. “There were some later maturing fields, but those are wait and see. The ground is saturated, and water has nowhere to go, so there is still a lot of standing water in places.”

Hurricane Hanna and other crops 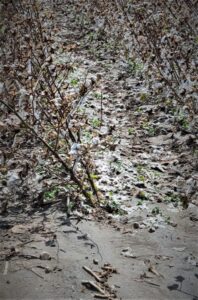 Heavy winds and rain caused severe damage to cotton fields that were ready to harvest.

The storm also hit sesame acres hard, Davis said. Like cotton, sesame fields were mostly ready for harvest. There were reports of sesame blown over with seeds on the ground due to high winds, while other fields were expected to rot before fields dry.

“Later-planted sesame was starting to dry down, and was exposed to wind damage, and younger fields look bad right now, but will hopefully pull through,” she said.

Sugarcane was blown over, and citrus orchards, mostly grapefruit and some oranges, took significant damages as well. There were no reports of tree losses, but developing fruit dropped due to high winds, and standing water may affect some producers in the long-term.

“There are still concerns about various crops,” Davis said. “It’s still early, so we don’t have a complete picture of what we’re dealing with.”

“Even though this storm was just a Category 1, the damages were widespread, even more so than some previous storms like Hurricane Dolly,” she said. “The wind and rain were bad, but the timing couldn’t have been worse for cotton producers.”