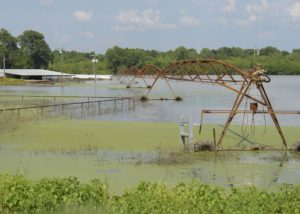 The lower Delta backwater flood that began in 2019 continues unabated into 2020, racking up thousands of dollars in losses per individual in the affected areas. This photo was taken July 27, 2019, in Issaquena County, Mississippi — file photo by Kevin Hudson, MSU Extension Service

A sharper focus on the economic impact of the lower Delta backwater flood of 2019 helps predict the implications of continued flooding this year.

Mississippi State University Extension Service researchers compiled data on the overlooked costs of the backwater flood that affected the Yazoo Mississippi Delta in 2019. They surveyed residents in the five affected counties in an attempt to quantify losses.

“These findings show a terrible cost, which can be repeated each time the area floods,” said Nicolas Quintana-Ashwell, an economist at the National Center for Alluvial Aquifer Research and a researcher with the Mississippi Agricultural and Forestry Experiment Station based at the MSU Delta Research and Extension Center in Stoneville.

At its peak in May 2019, the Backwater Flood of 2019 flooded 548,000 acres, damaged hundreds of homes and closed three highways. The affected area includes all or part of Warren, Yazoo, Issaquena, Sharkey and Humphreys counties, and flooding impacted an estimated 20,000 people.

The flood measured and quantified in 2019 continues in many places, so its economic impact is still growing. As of early May 2020, water accumulations in portions of the state’s Delta region were again causing rivers to overflow, spilling over into an estimated 200,000 acres of farmland.

“Several thousand acres have been under water for over a year and a half in places,” said Ben Lawrence, an agronomist with the MSU Extension Service. “In the areas affected by the continuous flooding, people are reliving 2019, which would have been unimaginable for two years in a row.”

That means the economic impact numbers of the backwater flood that began in 2019 are growing with each month the flood persists.

The study of the 2019 backwater flood calculated an increased cost of $3,217 per resident due to extra commuting distance and time, plus an average loss of $5,183 per worker in missed time on the job.

Sandy Havard, Extension agent in Warren County, commented on the ongoing struggle with flooding in areas such as the highly populated area around Eagle Lake.

“A lot of people still live there, and if they did go back to their home, they had to get a permit to rebuild, and the house had to be at a certain elevation,” said Havard, who is involved with the Warren County Long Term Recovery Committee. “That helped a lot in that area when the backwater flood came again this year.

“But some of those who moved away because of the flood in 2019 have not been able to move back because they don’t have the money to rebuild,” she said.

Emily Carter, Extension coordinator for Sharkey and Issaquena counties, said the intangible losses to the flood are harder to measure.

“Many people who had to move out of their homes for most of 2019 were just completing renovations and getting back into their homes when they were displaced again this year,” Carter said. “That caused a sense of hopelessness in some residents, but it also has drawn our community closer together as neighbor helps neighbor.”

This sense of caring is combined with resilience.

“Many families in the South Delta have been here for generations, and they will stay here, persevering through the hard times like their ancestors,” Carter said.

For a report on the full study, see Extension Publication 3418, “Survey of Overlooked Costs of the 2019 Backwater Flood in the Yazoo Mississippi Delta,” at https://bit.ly/35WN2KW.