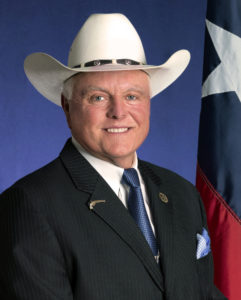 Texas Agriculture Commissioner Sid Miller plans to request a Section 18 from the Environmental Protection Agency to allow the continued use of dicamba in Texas under emergency conditions despite last week’s court ruling.

“The Texas cotton crop is going in the ground right now and our cotton growers must have certainty,” Miller said in a Texas Department of Agriculture news release. “I am not about to let a ruling by some court in California devastate the Texas cotton industry. Cotton is still king in Texas, no matter what the Ninth Circuit says.”

He was referring to the U.S. Court of Appeals for the Ninth Circuit in San Francisco vacating current U.S. registrations for three low-volatility dicamba products June 3.

In addition to the “existing stocks” order, Miller is asking for an emergency exemption under Section 18 of the Federal Insecticide, Fungicide and Rodenticide Act that would authorize EPA to allow unregistered uses of pesticides to address emergency conditions. Under such a Section 18 exemption, EPA allows limited use of the pesticide in defined geographic areas for a finite period of time once the agency confirms the situation meets that statutory definition of “emergency condition.”

Miller maintains the Ninth Circuit’s ruling has created such an emergency condition. Without the popular dicamba herbicide, Texas cotton could be at risk.

The EPA cancellation order can be found on the EPA website at https://www.epa.gov/ingredients-used-pesticide-products/final-cancellation-order-three-dicamba-products.

The EPA’s order applies to XtendiMax with VaporGrip Technology from Bayer, Engenia from BASF and FeXipan from Corteva. They are paired with Xtend crops genetically engineered to tolerate in-season over-the-top applications of the dicamba products.

Tavium, a premix from Syngenta that contains dicamba and S-metolachlor, is not covered by the court’s action and EPA order.