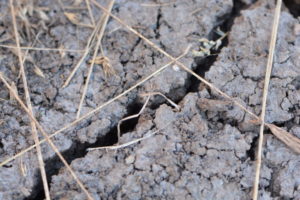 Above average temperatures are exacerbating drier-than-normal conditions around the state, said the state’s climatologist.

Storms over the last few weeks delivered rainfall to moisture-deprived areas of the state, but overall, 2020 is drier and hotter than normal going into July and August, Nielson-Gammon said.

“We’ve been on the dry side for whole calendar year,” he said. “The past three months are among the driest 20% of years for West Texas. A few spots here and there in the High Plains were listed as D3, or extreme drought.”

Nielsen-Gammon said higher-than-normal temperatures were contributing to the problem. The state is averaging 3 degrees above normal. The western half of Texas has been 3-6 degrees above normal, while the eastern half has been within 1 degree of normal. Parts of deep South Texas have been slightly below normal the past month due to good moisture.

“Those temperature differences exaggerate the problem in a drier-than-normal summer,” he said. “Moisture can go away quickly during summer, especially with high temperatures.”

Nielsen-Gammon said drought conditions this spring started in Central Texas and crept south before May rains changed conditions in those two regions. West Texas has emerged as the epicenter of drought conditions, with widespread areas of the High Plains experiencing severe drought.

West Texas has received little rain because very few squall lines have developed, he said. Usually they build over the western parts and move east across the state. Storms have developed, but they only delivered very spotty, inconsistent rainfall.

“The seasonal forecast is not promising and favors above-normal temperatures and drier-than-normal conditions,” he said.

Reagan Noland, AgriLife Extension agronomist, San Angelo, said dryland crops in his coverage area, which spans much of West Texas to north of Abilene, were suffering from dry conditions though fields varied greatly.

Rains that typically deliver moisture April-June did not materialize or were spotty, Noland said. But recent spotty rains may be enough to help dryland fields survive long enough for weather patterns to change.

“It’s highly variable, especially in cotton,” he said. “I can drive across a county and see fields planted at different times that caught timely rains where others didn’t, and the difference is pretty stark. Some of the showers have been short and intense. One area might catch 2 inches of rain and a few miles away might pick up trace amounts.”

Noland said some dryland grain sorghum fields too dry to make grain were being salvaged as silage or baled. Dry conditions negatively impacted establishment of dryland cotton fields, but late plantings may benefit the crop if late-season rains arrive.

July is typically dry and hot, while August-October can bring more consistent and substantial rainfall in the immediate area, he said. The majority of the 1.3 million acres of cotton in Noland’s coverage area are dryland.

“A lot of cotton won’t be too far into reproductive growth during the typical hot, dry part of summer,” he said. “The hope is for those late-season rains. It’ll be tough without the spring rains we usually get, but there is hope.”