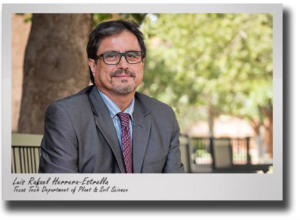 Luis Herrera-Estrella, Texas Tech’s first National Academy of Sciences member, started work in the fall in the Texas Tech Department of Plant and Soil Science. And now that he’s somewhat settled, the world-class plant molecular biologist has begun steps toward using cotton as a model system to develop technologies that are applicable more generally to all crops grown under conditions of drought, heat and salinity.

While he’ll focus on crops important to West Texas and the South Plains, he said the work performed in the university’s new Institute of Genomics for Crop Abiotic Stress Tolerance will be applicable in many regions of the world.

Herrera-Estrella hopes to develop technologies that will make genetic changes to plants easier and faster. To accomplish that goal he’ll have a team of 20 to 30 graduate students, postdoctoral researchers and research professors working in IGCAST within three to four years. He now heads a team of four researchers who relocated to Texas Tech from Mexico, and he hopes to hire four more researchers within a year.

Herrera-Estrella was enticed to come to Texas Tech with funding of $5 million from the Texas Governor’s University Research Initiative and a matching grant from the university.

Separately, the university is building a state-of-the-art greenhouse facility for his research.

“We have a very good infrastructure,” he said, including a new greenhouse and the new Experimental Sciences Building II, in which IGCAST will have an entire floor.

“So far, everything is going great, and I’m ecstatic about the future,” added Eric Hequet, a Texas Tech Horn professor and chairman of Tech’s Department of Plant and Soil Science.

Herrera-Estrella’s work in genomics and plant stress could result in mitigating the effects of drought on plant yield for the producers of this region, he said.

“We need to find ways of dealing with lack of water,” Hequet said. “That’s the reason we brought him.”

Print & Email
irrigation research texas tech 2019-07-10
Vicky Boyd
Previous: Consider These Factors Before Treating For Stink Bugs
Next: Know Your Fungicide Options And When To Use Them