Mild winter weather, cool spring days and a handful of heat-filled scorchers combined to create an interesting situation with cotton insects this spring and summer. Alabama Cooperative Extension System crop entomologists are keeping a close eye on the evolving situation.

Alabama Extension’s Ron Smith and Scott Graham have been working with busy cotton producers all spring. Now they have focused their attention on summer cotton insects.

A warmer than normal, dry winter allowed grasshoppers to overwinter in large numbers.

“We’ve had more calls about grasshoppers than thrips,” Smith said. “This is the worst year of grasshopper issues that I can remember. Grasshopper issues are worse on the Coastal Plain and the Southeast because they survive better in sandier soils.”

The warm weather in March triggered early emergence. In turn, producers battled an influx of grasshoppers to their seedling cotton. 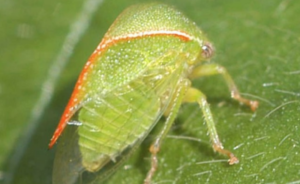 “We have observed a fair amount of threecornered alfalfa hopper (TCAH) damage in several fields of later planted cotton in north Alabama,” Graham said. “TCAH damage plants by girdling stems leaving a characteristic ‘knot’ around the stem, typically below the cotyledons. Plants will be stunted, and leaves and leaf veins will turn reddish.”

Treatment decisions for TCAH can be difficult because no damage thresholds are established. However, producers rarely observe yield losses from TCAH damage as injury happens early in the season. Unaffected neighboring plants can compensate for the yield lost from damaged plants.

“Snails are an emerging issue,” Smith said. “They don’t eat the plants, but so many snails get on a plant that it pulls the plant over.”

In an unusual situation in Talladega County, slugs destroyed five fields of seedling cotton on one farm.

The damage was so bad the producers decided to disk up the field, destroy the old crop residue and replant.

Spider mites were observed and reported on cotton in several locations in central Alabama in mid-June. Mites are always present in small numbers in cotton fields, but can quickly increase in number during a hot, dry period. 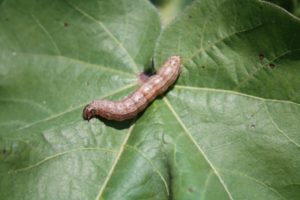 Graham said producers are experiencing issues with tarnished plant bugs (TPB). Daisy fleabane is a primary host for TPB. It bloomed early and is drying down so TPB are now moving into cotton.

“Tarnished plant bugs typically develop into adults in roughly 21 days,” Graham said. “We expect that generation is moving into cotton now. This is something to look out for because TPB can really damage cotton in the pinhead square stage. We found TPB populations above threshold on June 19 in cotton planted in April. Tarnished plant bugs will be the prominent pest of cotton through the third week of July.” 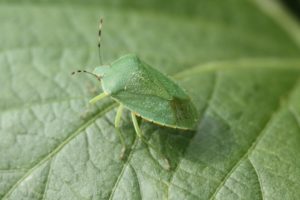 Both entomologists said the necessary control will be different based on geographical location in the state.

“Brown marmorated stink bugs are now part of the stink bug complex in central and north Alabama.” Smith said. “The most injury from BMSB will occur around field borders and in the first 50 feet of cotton fields.”

Corn, which serves as a trap crop, can be treated which may reduce their numbers in cotton.

In addition to the stink bug complex, soybean producers should keep a watchful eye on fields for the redbanded stink bug, which have already been treated in Louisiana. 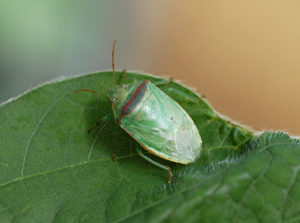 “This is a major pest of soybeans,” Smith said. “These stink bugs are natives of South America and came to Alabama through Louisiana. These stink bugs don’t have an inactive state. Growers need to be aware as the crop beings to develop pods.”

While the redbanded stink bug can overwinter as far north as Prattville, Alabama, they are pushed back to the Gulf Coast in colder weather. Because the winter was mild in Alabama, these stink bugs are already present in Alabama soybeans.