Winter rains helped replenished soil profile in much of Texas 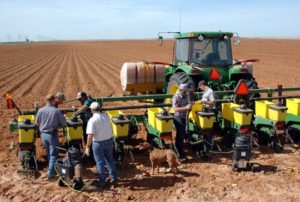 Farmers around the state are prepping and planting their acres amid promising subsoil moisture indexes. If Mother Nature delivers average summer rains, yields could be above average in 2020 — Texas A&M AgriLife Extension Service photo

Good rains last fall filled soil moisture profiles for much of the state and set up a good yield potential for Texas farmers, according to a Texas A&M AgriLife Extension Service expert.

Dr. Calvin Trostle, AgriLife Extension agronomist, Lubbock, said lines between areas with plenty of good soil moisture and those dealing with drought were distinct. Big rains in the fall delivered deep soil moisture throughout the “root zone” for most areas, while much of South Texas and along the Gulf Coast continue to struggle with drought.

The difference in good soil moisture – 4-5 feet down – can make a big impact on harvest yields, he said.

“The place you want to be is to have your soil holding as much moisture as it can hold going into the cropping season,” he said. “Deep soil moisture and regular rains through summer could bump yields of corn, sorghum and cotton up 10%-20%, and even more if you’re a West Texas dryland farmer. That moisture makes a huge difference.”

The High Plains and Rolling Plains from Midland to Big Springs up to the top of the Panhandle and along Interstate 20 from Abilene to Wichita Falls received good fall and winter moisture. Those rains brought much of those areas out of drought and created a deep soil moisture profile.

Trostle said dryland farmers in the High Plains who receive average summer rain could see up to 480 pound lint yields, or 1 bale, per acre with the combination of moisture and improved cotton varieties. A typical year yields around 250 to 300 pounds of lint per acre.

“Farmers are eager to plant this season,” he said. “They see a nice opportunity to maximize their per-acre yields.”

Little to no rain

In the southern half of the state, rains have been scattered at best.

Dr. Josh McGinty, AgriLife Extension agronomist, Corpus Christi, said most of the region was in D2 stage drought, or severe drought, according to the U.S. drought monitor.

“A week ago, much-needed rains fell across some of the more inland counties but missed those of us along the coast,” he said. “Corn and grain sorghum fields have emerged to good stands in most areas but there are some inconsistent skimpy stands where soil moisture was marginal.”

McGinty said timely rains would have helped even those fields but have not developed so far. Most producers were finishing cotton planting and were hoping chances of rain in the forecast will materialize.

AgriLife Extension agent reports from other southern parts of the state reported spotty crop emergence, failed germination and delayed plantings due to severe to extreme drought.