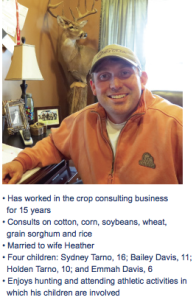 It is the middle of November; the entire cotton crop has currently been picked, and a majority of it has been ginned. For the weather conditions that we had for this year’s crop, I am very pleased with the yields that were produced.

Last winter was unseasonably dry and warm in southeastern Missouri and northeastern Arkansas. That warmth and lack of moisture carried into the early spring season, allowing us to plant seven to 10 days ahead of the previous years. The higher-than-average temperatures also germinated quite a few pigweeds. Fortunately, we were able to kill them during the planting process, rather than relying on pre-emerge chemicals, in hopes of keeping down the first initial flush.

The dry spring and summer also tied up some of our mixed fertilizer, causing us to see several fields with potash deficiencies. This lack of available potash affected yields, causing them to run anywhere from 100 to 200 pounds less than in those fields where potash was not lacking. Compaction problems were also noticeable due to the dry conditions, but we are currently ripping these fields for next year’s crop.

Root-knot nematodes seemed to be in higher numbers than normal in areas where the soil was lighter due to the warmer winter along with the loss of Temik. Spider mites in our area are generally a very spotty, mid-tolate season pest. However, this year many of the fields had to be treated three times, starting on very small cotton.

The warmer winter and spring temperatures had advantages as well as disadvantages. We were able to plant earlier, and a lot of our pigweeds germinated prior to planting, allowing us to kill them at or just after planting. We also saw where all of our compaction problems were, permitting us to be able to address the issue through deep tillage.

If we get into another dry year like last year, we will topdress our fields with the lowest potash levels according to our soil samples. We did this to a few fields this year with 100 pounds of potash at or around the tenth node. The K soil tests in these fields were 100 to 150 pounds per acre, showing very few deficiencies.

Going into the 2013 season, we will be optimistic that we will have a little cooler crop season and may be able to get a little more rain. However, all we can do is to take what we get and apply the things that we have learned from this year’s crop to next year’s crop.

Click here to ask Chris Tarno a question or submit a comment about this month’s Cotton Consultant’s Corner.