The November elections have come and gone; a president has been chosen; and the roster on Capitol Hill is in place. Cotton producers now have to assess the political environment in Washington, D.C., to try to determine what effect it will have on cotton.

Ninety-two percent of the respondents in the November Web Poll expect to see some type of negative effect, while eight percent say a positive effect may be in store, especially if other factors are considered along with the election results.

Following is a sampling of the many remarks that we received from the Web Poll respondents who shared their thoughts about how they voted.

• “It’s all about the dollar and its effects on export business. I work at American Cotton Growers denim plant, and in January 2013 we are laying off 100 employees due to U.S. companies using overseas produced products – not American-made denim.”

• “I think the results of the election will have an unintended positive impact on agriculture. If the economy doesn’t improve, people will continue to invest money in things other than the stock market. This means that farmland values should hold, and commodity prices should stay favorable. Also, with domestic oil production not likely to increase, ethanol demand should remain stable, which should have the effect of holding corn prices up and thus keeping cotton, wheat and soybeans profitable.”

• “Prices have never been better. The reason for price downturn is now. The market thought there was going to be an Elephant there!”

• “More regulations from EPA will prevent and delay new chemistry that is needed to fight resistant insects
and weeds.”

• “No politician today cares about farming as shown by the failure to act on a new Farm Bill. I don’t think either candidate for president would have had a positive impact.”

• “Only when there is a shortage of food and clothes at Walmart, Kroger, HEB, etc., maybe people will understand the true value of agriculture.”

• “I feel that the effect of this election will be negative in the short term, but I have faith in this nation and believe it will correct itself with the help of God. This country has seen difficult times before and has emerged strong-er. We must continue to stay strong and keep our freedom for the sake of our families. As for cotton, it’s just a part of the story.”

• “Congress and our president have forgotten that the farmers of this nation are the biggest small business owners in the country. The people have forgotten where their food and clothing come from, and there are fewer and fewer men and women who want to go into the business of farming. We can only hope that our president and senators and congressmen wake up and look after our country.”

In this month’s Web Poll, we are asking our readers to weigh in on estate tax reform and why it is such a critical issue for family farms, especially in light of succession plans.

Go to cottonfarming.com to cast your vote and share your comments. Please include your location, so that readers can get a better sense of what cotton farmers in different areas are thinking about. Results of the Decem-ber Web Poll will be reported in the January issue of Cotton Farming.

Do you think the outcome of the 2012 elections will have a positive or a negative effect on cotton? 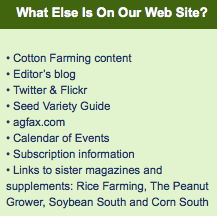 Do you believe that estate tax reform to benefit family farms will happen in the near future? In the comments section, please explain why this is such a critical issue.

Register your vote at www.cottonfarming.com.