Every year presents different growing conditions and new challenges, and 2014 was no exception. For some of the most troublesome pests, the university Extension experts predicted accurately that:

What no one anticipated was an explosion of the sugarcane aphid.

Overall, sucking insect pest pressure in cotton could be categorized as moderate. Thrips pressure was at lower levels relative to previous years, due in part to frequent rains. Tarnished plant bugs were a concern season-long for cotton growers, even though overall infestations were also lower.

Many growers relied on Transform WG insecticide, which offers a new class of chemistry, applied at or near bloom for control of tarnished plant bugs. Aphids occurred later than normal in the cotton season, and infestations were persistent. Growers found applications of Transform targeting tarnished plant bugs were also an effective tool for the control of cotton aphids. Cool temperatures in late July did teach us that control of cotton aphids might not be as rapid as when plants are actively growing and aphids are actively feeding.

Infestations of the sugarcane aphid spread like wildfire on grain sorghum from northern Mexico to Texas, into the Mid-South and across Alabama, Georgia and Florida. The pest has a phenomenal reproductive capacity and the ability to produce copious amounts of honeydew, resulting in rapid damage to entire fields. Transform was used on the majority of grain sorghum acres under an emergency Section 18 and provided effective control. Commercial experiences indicate that insecticide applications must be timed at the early onset of infestations, and optimizing coverage throughout the canopy is essential. If a grower can keep the populations contained to the lower third of the canopy, it is considered a “win.” 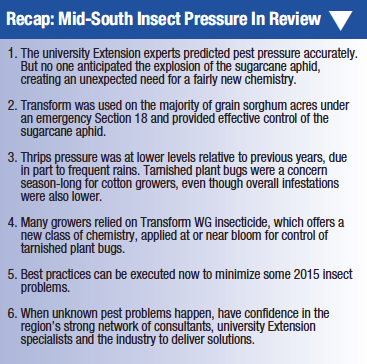 Although it is impossible to accurately predict what 2015 will bring, there are best practices that can be executed now to minimize some insect problems. Be sure to destroy cotton stalks as soon as possible after harvest to reduce populations of overwintered boll weevils. Fall tillage can destroy heliothis pupae buried inches below the soil surface. Application of a fall herbicide can reduce weed infestations that harbor insects.

As always, when the unknown pest problem does happen, have confidence in the region’s strong network of consultants, university Extension specialists and the industry to deliver solutions that help enable success.

More About The Author