As heroic wildfire fights persist across California, recovery from last year’s catastrophic forest fires continues – and the fight to restore watersheds, landscapes, lost homes and livelihoods affected by the 2013 Rim Fire in the Stanislaus National Forest has now shifted to the courtroom.

Almost immediately after the Stanislaus forest supervisor issued a Rim Fire recovery plan last month, environmental groups went to court to prevent certain portions of it from being implemented. Specifically, the groups wanted to block plans for salvage logging on 15,000 acres of the 260,000 acres affected by the fire.

Three environmental groups, including the Arizona-based Center for Biological Diversity, filed a motion for a temporary restraining order to stop the logging. But that motion was denied by a judge last week.

“While it remains to be seen whether the court will grant the plaintiffs’ request for a preliminary injunction, this is a significant legal decision for the U.S. Forest Service,” says Mark Rentz of Sacramento-based Integrated Natural Resources Management. 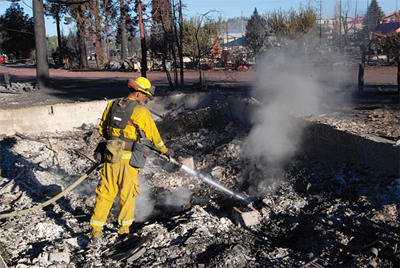 Win For Local Economies?
Rentz says the ruling “also represents a win for local economies, supports efforts to restore the ecosystems affected by the fire, and acknowledges the work of Yosemite Stanislaus Solutions,” which he described as a coalition of environmental groups, forest- products companies, ranchers, community businesses, and county, state and federal agencies.

The court’s denial of the restraining order, Rentz says, “clearly indicates collaborative efforts and integrated resource management strategies as being encouraged and as having a positive impact on project certainty, conflict resolution and economic viability.”

“Innovative partnerships are developing because the way we’ve managed our forests in the past and the way we’ve approached recovery from these continuing disasters has not always worked effectively.”

Need For Collaboration
With the catastrophic King Fire burning in the American River Canyon in El Dorado and Placer counties, and with recovery efforts just beginning in the wake of the Boles Fire that destroyed 150 homes in the Siskiyou County community of Weed, experts say the need for collaboration in recovery efforts has never been greater.

But, recently, environmental groups filed another motion – a request for preliminary injunction – to stop recovery logging in the Rim Fire area in Tuolumne County. A hearing has been set in federal court in Sacramento, and legal experts anticipate a lengthy court process.

“Wildfires can not only cause devastating losses of life and to private and public property as well as natural resources, they can also trigger legal actions that may hinder recovery,” Thompson says. “We need to find ways to help families and forests recover. Obstructing those efforts through the courts may not be the most helpful approach.”

Kate Campbell is assistant editor of Ag Alert at California Farm Bureau. Contact her at kcampbell@cfbf.com.