The National Cotton Council believes all government policies that affect global fiber production and trade – including synthetics – need to be examined.

What about the recent U.S. challenge to China’s subsidies?
Last month, the U.S. Trade Representative filed a World Trade Organization (WTO) complaint against China’s price supports for corn, wheat and rice, saying they distort world markets and cost U.S. farmers hundreds of millions of dollars. Although cotton was not included in the challenge, the NCC believes this initiative reflects a growing desire here and abroad to more effectively address the range of policies in major developing countries that affect agricultural markets.

For cotton, there are ongoing semi-annual dedicated discussions in the WTO that began in 2013. Those discussions are designed to enhance transparency and monitoring in all trade-related aspects of cotton. Additional transparency and monitoring definitely are needed as key countries such as China, India and Pakistan have failed to meet their obligations of timely notifications to the WTO. 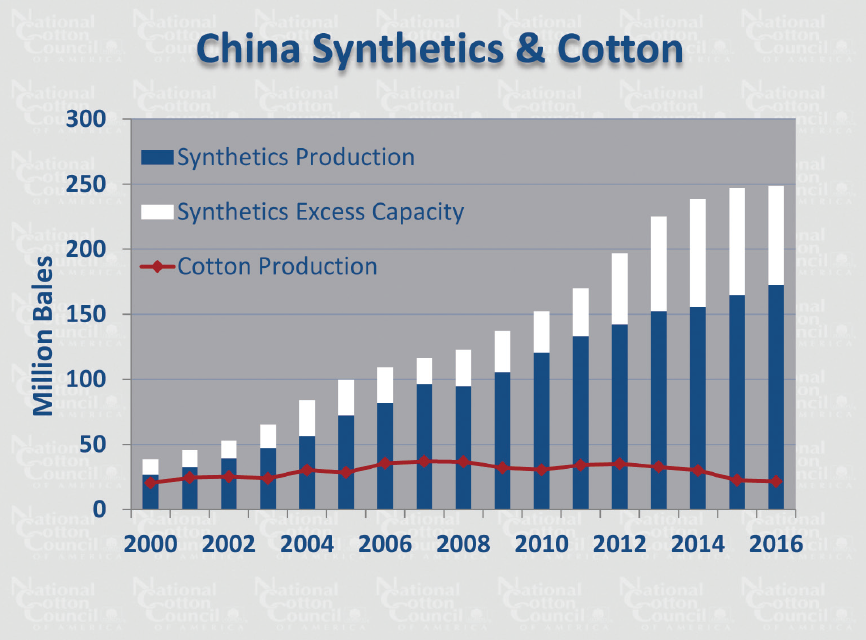 However, a full understanding of all factors affecting global cotton markets cannot be achieved without considering the impact that synthetic fibers have on global cotton production, consumption and trade. With U.S. cotton area down almost one-third since 2011 and the fundamental changes in the safety net included in the 2014 farm law, an honest critique of the global cotton market must consider subsidies provided to synthetic fibers along with cotton policies in the developing world.

Plain and simple – synthetic fibers competition is limiting growth in cotton demand, which affects all global cotton market participants including cotton producers who are fighting an uphill battle financially.

How much of a threat are synthetics?
The threat from synthetics has never been greater than it is today. The most alarming evidence is that global polyester production capacity grew from 232 million bales in 2011 to 322 million bales in 2016 – three times the current world cotton production level. On top of that, world polyester producers are only operating at 71 percent of capacity.

China plays a major role. That country now accounts for more than 70 percent of world polyester production capacity. Even more disheartening is that China continues to increase production capacity and currently has the ability to produce an additional 76 million bales of polyester. Consequently, the NCC will continue to convey to our trade officials the critical importance of understanding all of the incentives contributing to the excess production capacity of synthetic fibers.