Congressional leaders hope by Christmas to wrap a bow around the first comprehensive tax reform in 30 years — a measure on which the National Cotton Council has actively conveyed its priorities.

What input has the NCC provided?
Among recent actions, the NCC joined other agricultural organizations on letters to Congressional leadership conveying support for tax reform provisions involving: 1) the use of cash accounting; 2) Section 199 deduction; 3) capital gains; 4) interest deductibility; and 5) estate tax repeal. I also joined other agricultural representatives to discuss priorities with Treasury Secretary Steven Mnuchin after which I noted in an NCC statement that, “It is critical to maintain key features, such as interest deductions and cash accounting, while also eliminating the death tax and reducing the capital gains tax rate.”

Do current proposals have implications for agriculture?
Similarities and major differences exist between the House and Senate proposals. Both would establish new tax benefits for businesses organized as pass-through entities. The House bill provides a special rate for a portion of a pass-through active income while the Senate bill provides a deduction. Both bills include limits on which types of pass-through entities could qualify. Both bills also would: 1) eliminate the Section 199 domestic production activities deduction — a significant provision to many agricultural cooperatives — and changes also are made to net operating loss provisions; 2) allow businesses to fully and immediately deduct capital investment expenses through 2022; 3) limit businesses’ ability to deduct interest payments, although the limit wouldn’t apply to certain small businesses, including farms and agriculture up to a set revenue amount; and 4) maintain cash accounting. 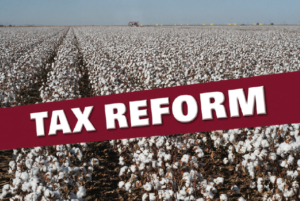 Congress and the President hope to get tax reform legislation signed into law before Christmas.

Regarding the estate tax, the House proposal would permanently repeal the tax effective on Jan. 1, 2024; maintain the gift tax at current levels until that date, then cut the rate to 35 percent on gifts over about $12 million; permanently repeal the generation-skipping tax effective on that date; and maintain full step-up in basis. The Senate proposal would double the current estate tax exemption of $5.49 million per person and maintain the step-up in basis.

What about other business provisions?
The Senate proposal shortens the recovery period from seven to five years for any machinery or equipment (other than grain bins, ginning assets, fencing or other land improvement) used in a farming business. It also repeals the required use of the 150 percent declining-balance depreciation method for property used in a farming business. That method will continue to apply to any 15-year or 20-year property used in the farming business to which the straight-line method does not apply, or to property for which the taxpayer elects the use of the 150 percent declining- balance method. The corporate tax rate would be reduced to 20 percent. Section 1031 like-kind exchanges of land are preserved.

The NCC continues to monitor the development and negotiations of tax reform proposals to ensure that the effects of these are considered along with the needs of farmers and other cotton industry segments. While Congress and the President hope to get tax reform legislation signed into law before Christmas, that action may be pushed into early 2018.