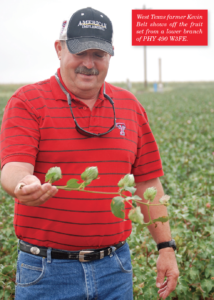 Kevin Belt farms by the book.The producer of cotton and other row crops near Plainview, Texas, keeps a three-ring notebook with him to record agronomic activities throughout the season.

Each field has its own page, where Belt notes variety, planting date, spray applications, amount of water applied — if irrigated, and other items of importance including weeds or disease. He also records the spray nozzle he used for each agricultural chemical application.

The notebook goes with Belt whether he’s in his sprayer or his pick-up truck.
With a three-rotation that includes one year of cotton, he says the records help him remember what he did in previous seasons.

Having the detailed field histories also helps when he meets with his cottonseed representatives to plan next year’s crop, says Ken Legé, cotton development specialist with PhytoGen Cottonseed based in Lubbock, Texas.

“A lot of your growers don’t keep these types of records, and they’re key,” Legé says. “As a seed rep, we want to try to put the right variety on the right acre.”

A Wide Variety Of Environments

Belt, a fourth-generation cotton grower and 1985 Texas Tech agricultural economics graduate, has fields near Cotton Center in the southern part of Hale County north to Edmonson. Between the two, the elevation ranges from 3,400 feet above sea level in the south to 3,500 feet in the north.

“There’s a lot of difference between the south and north in Hale County, so you have to think about maturity,” Belt says.

Because of lower elevations and a slightly farther south geography, his southern-most fields typically enjoy a one-week to 10-day longer growing season than those to the north.

Belt also farms a mix of irrigated ground, with wells averaging of 50 to 100 gallons per minute, and dryland fields. To maximize irrigation water-use efficiency, he uses LEPA, or low-energy precision application, center-pivots. He was able to apply about 10 inches per acre to his irrigated fields this year.

“Most of our ground is irrigated, but it’s getting less and less,” he says. “That’s why we’re looking to the drought-tolerant varieties on all of our ground.”

Since 1930, overdraft has significantly reduced the aquifer’s groundwater storage under most of the eight states, according to a Kansas State University study. In the Texas High Plains, for example, storage has decreased by about 30 percent from 1930 to 2010, according to the study.

The scarce water supplies are the driving force behind Belt’s three-year rotation, where he plants cotton one year, followed by fallowing the field the second summer. That fall, Belt plants winter wheat. He rents the ground out for custom cattle grazing, which brings in enough revenue to basically pay for wheat crop inputs, and then harvests the wheat. Belt was quick to point out that the only way the cattle arrangement pencils out is because he owns the ground.
Then he’ll start the rotation again, no-tilling cotton into the wheat stubble the following spring. By fallowing fields between crops and leaving wheat stubble in the field, Belt says he’s able to capture and store moisture in the soil for his cotton crop.

Water Tops Selection Criteria
Water also is Belt’s top selection criteria when he mulls what cotton varieties to plant each season. If you’re successful in matching the proper variety to each field’s water situation, then yield and fiber quality will likely follow suit, he says.

On his irrigated ground or southern-most fields, he’ll plant an indeterminate variety, such as PHY 450 W3FE or PHY 490 W3FE.
Although they may require more than one application of plant growth regulator to rein in growthy habits, Belt says,

“With the growth and vigor we have, we’re not afraid to go strong on the PGRs.”

In areas with a moderate-length growing season, he may plant a mid-indeterminate variety. And on his dryland ground and fields to the north, he’ll plant a determinate
variety.

In the past, Belt says he worried about having a long enough growing season at the higher elevations to make a quality crop.

“We’ve had a problem with low micronaire because you don’t have the maturity to finish it out,” Belt says.
But Legé says PHY 220 W3FE, one of the varieties Belt planted this season, has produced high micronaire under those short-season and dryland conditions.

Thanks to unusual weather this year, Belt also received 15.5 inches of timely rains. As he showed off a dryland field of PHY 490 in late September, Belt and Legé marveled at the plant health and lower branch fruit set, which was more representative of an irrigated field than non-
irrigated.

During a normal year, Plainview averages less than 20 inches of rain, according to a Texas Tech University’s West Texas Mesonet weather station. And in 2011, a year Belt says he would rather forget, the area received less than 5 inches because of record drought.

Other Selection Criteria
Belt says he also looks for varieties with Verticillium tolerance as well as Bt for worm control. Until recently, Verticillium was only a spotty problem in the High Plains.

With the fungal disease more widespread this season, Belt says he was glad to have the disease tolerance provided by PhytoGen varieties. He also liked the Bt insurance offered by WideStrike 3 in many of the PhytoGen varieties.
Although most High Plains growers historically only have to spray non-Bt cotton about once every eight or nine years, 2017 turned out to be bad for worms. Many growers without the Bt protection had to make at least one insecticide application this year.

Having varieties that are storm proof also is important in the High Plains, Belt says, since rain and wind are not uncommon when bolls are open.