The National Cotton Council characterized 2018 as a year with significant uncertainty and volatility in the world cotton market. It sees 2019 as having some important unknowns as well.

Is there a predominant unknown factor for 2019?

▪ The ongoing U.S.-China trade dispute and the 25 percent tariff on U.S. cotton imported into China continues to be a wild card.

Even with tariffs remaining in place, a projected expansion in world trade and the opportunity to backfill trade into other markets would allow U.S. exports in the 2019 marketing year to increase from 2018. But the increase would not be to the extent expected in the absence of tariffs.

Assuming a dispute resolution, NCC economists project China will increase mill use to 41.4 million bales and imports to 11.1 million bales in 2019. If so, the United States could expect to export more cotton to China in the 2019 marketing year and gain back some of the market share temporarily lost when China — due to the tariffs — sought raw cotton from Brazil, Australia and other countries.

The longer-term imposition of tariffs would dramatically increase the likelihood of permanent market share losses in China.

When this column was submitted in mid-February, NCC economists projected overall U.S. raw cotton exports to increase in the 2019 marketing year to 17.4 million bales from a projected 15 million bales in 2018. If realized, this would represent the second highest level of U.S. exports behind 2005.

However, when combined with projected U.S. mill use of 3.25 million bales, total 2019 offtake would fall short of this year’s expected production of 22.7 million bales. Thus, projected ending stocks of 6.1 million bales would be the highest since the 2008 marketing year’s end. 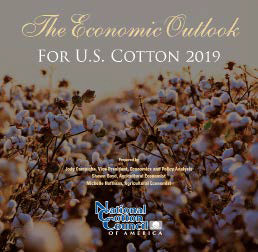 NCC economists say projected 2019
marketing year U.S. exports of 17.4
million bales would be the second
highest ever behind 2005.

What are some other key factors?
▪ The general economy’s overall performance will affect cotton demand. China’s economic growth has slowed, and Turkish mills are plagued by a weaker currency relative to the dollar. In addition to the tariffs, the uncertain economic outlook is weighing on the market.

Based on the underlying assumptions and resulting cotton balance sheet, the stocks level outside of China in the 2018 marketing year along with higher projected production in 2019 may contribute to a more bearish tone for cotton prices in 2019.

However, the increase in world cotton trade due to higher Chinese imports along with a resolution to the U.S.-China trade dispute could provide some price support.

Additional details of the NCC’s 2019 Cotton Economic Outlook are on the NCC’s website at www.cotton.org/econ/reports/annual-outlook.cfm.

Gary Adams is president/CEO of the National Cotton Council of America. He and other NCC leaders contribute columns on this Cotton Farming magazine page.