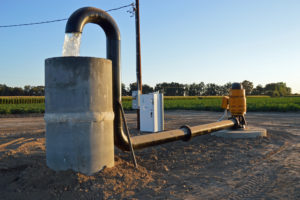 Water flows from a groundwater well adjacent to a cotton field in Tulare County, California — photo by Vicky Boyd

Farmers, water managers and government agencies agree: Groundwater sustainability is critical for California. But achieving it could bring significant changes to the state’s agricultural landscape, according to speakers at a recent Sacramento gathering of water professionals.

California Farm Bureau Federation Director of Water Resources Danny Merkley says now that the local agencies have been established and basins prioritized, the agencies are moving forward with the technical and costly work of developing their sustainability plans.

During the California Irrigation Institute conference in Sacramento, Mike Wade, executive director of the California Farm Water Coalition, called SGMA “the most significant change in water management in 100 years in California” and describes it as “an enormous burden that will likely divert 2 million acre-feet of water from the state’s agricultural water supply.”

“It’s going to cause cropping changes in the state where we could have potentially 600,000 to 800,000 acres of farmland go out of production,” he says.

The exchange contractors’ agency has worked with 22 other GSAs involved in the sub-basin on a coordination agreement that defines how water data and methodology will be used to develop a groundwater sustainability plan. Related to plan development, Martin says basin water data has been collected since the 1950s and will add to the water budget.

“If we go down a path and try to make this more complicated, we’re just asking for problems,” he says. “We’re doing a non-numerical water model, a spreadsheet-type model: Take your knowns — surface water supply and consumptive use of crops — and those two things make up a significant portion of your water balance.”

Martin says CCID and the exchange contractors have had a long working relationship with cities that also draw water from the sub-basin. He suggests that other agencies working on GSPs build trust with cities and others involved in the process.

“Once you’ve developed trust, then you can start to make progress,” Martin says. “Cities have turned over their implementation and development of the GSP to us. It’s really a continuation of our historical practices, but it’s really laying the tracks for a long-term strategy that is going to be sustainable.”

Dan Dooley, a principal in the Fresno-based consulting firm, New Current Water and Land, says the company is monitoring 70 GSAs across the state.

“We see, particularly in the major overdrafted basins, that coordination among and between GSAs and neighboring sub-basins is flimsy at best,” he says, adding that key issues include disagreements over modeling and data.

Fresno County farmer Don Cameron, who chairs the State Board of Food and Agriculture, received the CII Irrigation Person of the Year Award for his contributions to the study of groundwater recharge.

“I think the next 20 years will be really challenging,” Cameron says in accepting the award. “There’s talk of anywhere from a half a million to a million acres of land coming out of production in the San Joaquin Valley.”