The National Cotton Council soon will submit comments in response to an EPA proposal that could negatively affect the way Bt crop resistance is managed.

What does the proposal entail?

EPA proposes a phase-out of certain single-toxin traits that could result in being a steppingstone for accelerating resistance to traits that are still effective. Additionally, EPA’s proposal outlines a new strategy intended to provide early indications of “practical resistance” that would trigger mitigation measures to avoid the spread of resistant insect genes.

The new effort includes requirements for registrants to plant Bt and related non-Bt sweet corn plots (sentinel plots) that would be monitored for unexpected caterpillar damage and the presence of second-instar larvae. An unexpected damage threshold will be established for new Bt traits.

Once damage exceeds the threshold, a set of mitigation measures will be triggered for the county and adjacent counties. Damage above the threshold will be defined as “practical resistance” requiring initiation of several best management practices to prevent spread of the resistant pest trait.

The strategy maintains the natural refuge for cotton, increases corn refuge-in-a-bag (RIB) from 5% to 10%, and includes required farm visits (to verify compliance with 20%) for 20% non-Bt corn block refuge in cotton-producing states. If a producer does not have the required refuge, the company cannot sell Bt products to that farm for two years.

How has the NCC responded?

■ EPA’s current draft proposal follows its Scientific Advisory Panel’s July 2018 report addressing multiple questions, concerns and requests for guidance. The NCC submitted comments to the panel prior to its meeting that:

◆ Restated the NCC’s opinion that EPA is not legally authorized to mandate resistance management under the Federal Insecticide, Fungicide & Rodenticide Act. 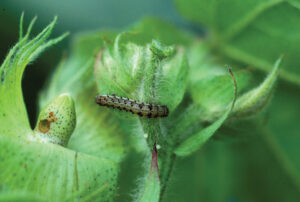 EPA has accepted that some caterpillar species, such as this bollworm, have developed resistance to certain Bt traits.

Since then, the NCC has closely monitored the advisory panel’s efforts and the development of EPA positions related to resistance management of plant incorporated protectants.

Unfortunately, EPA’s current proposed draft deviates from the panel’s recommendations in several areas due to unsolicited comments received after the panel’s report was published. The NCC is closely reviewing details of EPA’s strategy under this proposal and will submit comments to the agency’s draft proposal before the Nov. 9 deadline.

The draft proposal can be viewed and downloaded at https://beta.regulations.gov/document/EPA-HQ-OPP-2019-0682-0007.

Gary Adams is president/CEO of the National Cotton Council of America.