Dr. Fred Bourland was born and raised on a cotton and soybean farm in northeast Arkansas. He began working in cotton breeding as a graduate student at the University of Arkansas in 1970 and has been actively involved in the discipline since then. During a recent webinar, Bourland shared his 50 years’ perspective on cotton. This synopsis highlights some of his observations. 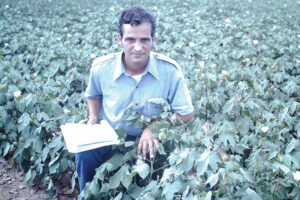 In September 1969, I experienced two life-changing events. On a Saturday, I got married, and the next week, I began studying plant breeding at the University of Arkansas. In the spring, I landed an assistantship with Dr. Brad Waddle — a cotton breeder — and I have spent the past 50 years pursuing this career.

The technological changes that have affected cotton breeders can be summed up in one word: computers. In 1970, we didn’t have personal computers. Things like electronic data entry and analyses were all done by calculators, some of them mechanical.

We had no computer-related devices, such as seed counters, harvest weigh systems, and cotton fiber quality assessment instruments. Instead of copiers, we used carbon paper in typewriters.

There were no emails, no texting, no cell phones and no online information. In my opinion, the technology we had in 1970 was about the same as it was in 1920 when cotton breeding began at the University of Arkansas.
Cotton Legislation

Legislation also has affected cotton breeding over the past 50 years. In 1970, the Plant Variety Protection Act was passed. According to the U.S. Department of Agriculture, this intellectual property statute “gives breeders up to 25 years of exclusive control over new, distinct, uniform and stable sexually reproduced or tuber-propagated plant varieties.”

This legislation became important because it gave private companies a way to protect their varieties, which allowed them to make a lot more investments in plant breeding. It also allowed breeders to make wider crosses for more diverse, advanced varieties.

That same year, Cotton Incorporated was founded and has conducted a lot of research and development in cotton breeding and cotton research in general. The third change that has occurred relative to legislation is the decline in state funding for cotton breeding.

Finally, we have more regulations today associated with the environment, employees and pesticide use. Many of these restrictions are good, but all of them cost time and money.

As far as the cotton plant itself, we have broken some linkages involving fiber quality and yield, but the chromosome structure is essentially the same as it was in 1970. So cotton genetics have not changed, but our understanding and use of plant genetics has changed considerably.

Through breeding techniques, we have plants that tend to produce fewer vegetative branches even though we are planting lower plant densities. By reducing vegetative branches, we have increased maturity and uniformity. In the 1970s and 1980s, we studied a whole litany of morphological traits, such as leaf shape, bract shape, gossypol glands, in relation to host plant resistance issues.

We found that cotton with a twisted bract, called a Frego bract, tended to resist the boll weevil. A trait like this took us down the road of host plant resistance, but it was not the answer to resistance for other insects.

In the area of plant development, we saw the advent of vacuum planters, which allowed us to plant to a specific stand and not have to “thin” cotton. After 1980, irrigation capability accelerated after one of the hottest, driest years on record.

We also increased use of plant growth regulators — defoliants as harvest aids, mepiquat chloride to control plant height and boll openers to facilitate once-over harvest instead of having to scrap the cotton.

We began monitoring the plant. This led to building COTMAN, an expert cotton management system that gave us a better handle on what was going on with the plant throughout the season.

During my career, I also have observed the evolution of three major areas of cotton pests — diseases, insects and weeds. 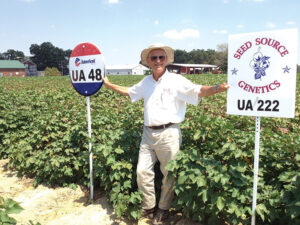 UA 48 and UA 222 are two cotton varieties that came from Dr. Fred Bourland’s breeding program at the University of Arkansas. The photo was taken at a 2012 field day at the Lon Mann Cotton Research Station at Marianna.

Even in the 1990s, I could walk through a field, pull up a plant and show you sublethal seedling disease. That’s not true anymore mainly because of improvements in seed treatments.

We have a high level of resistance to bacterial blight, which is also an organism involved in boll rot. Because we have molecular markers, I suspect in the near future all of our varieties will be resistant to this disease. We now have increased tolerance to Verticillium wilt and improved resistance to nematodes.

In 1970, we had to spray for the boll weevil, which knocked out the beneficial insects, causing bollworm and budworm to explode. Today, the worm complex is mostly controlled by Bt cotton, but plant bugs have become a major insect pest.

As for weeds, 50 years ago there was a limited number of herbicides. We depended on mechanical weed control. Now our weed management system is dictated by transgenes and chemical herbicides. We do a good job of controlling grasses, but resistant broadleaf weeds, particularly pigweed, dominate the field.

In 1930, Arkansas planted a record 3.5 million acres of cotton — about 10% of the total land area of the entire state. That same year, the state had a record low yield of 119 pounds per acre. In 2019, Arkansas planted 500,000 acres of cotton and had a record high yield of 1,185 pounds per acre. This may seem to be an inverse relationship. If you decrease acreage, you increase yield. But it’s a little more complicated than that.

Over my career, I have observed two, potentially three, yield plateaus in Arkansas: 1966-83, 1988-2000 and 2010-2018. In some instances, the plateaus were present in other areas of the Cotton Belt as well. The first one was mostly attributed to not combining new technologies within every discipline into a system. Once we did that, yields improved.

The second plateau was generally attributed to worm resistance to insecticides early in the plateau and the genetic lag caused by the introduction to transgenes later in this plateau. Here are some factors that led to a yield recovery in this instance:

Plateau 3 could potentially be attributed to new transgenes being backcrossed into older genetics or a climatic limits drag where it’s difficult to increase high yields, particularly in the Mid-South region’s climate. Recovery from the third yield plateau might be attributed to:

■ Less genetic drag as we get more experience putting transgenes into varieties.

■ New genetic, physiological and/or production system breakthroughs may be needed.

They are not as demonstrative, but some major changes have occurred in fiber quality. From 1986-2002, we made a big jump in fiber strength, which increases the value of the fiber. To me, the biggest change has been in fiber length.

In the 1970 variety tests, we were at 1.1 inches, and the high was only 1.14. But in the past couple years, we’ve jumped to 1.2 inches, and the highs are pushing 1.3 inches. Even 0.1 or 0.2 inches makes a big difference for the cotton spinners. And the marvelous thing is that some of these high lengths are occurring in some of our highest yielders. I don’t see any real trend in micronaire because it’s mostly controlled by environment. 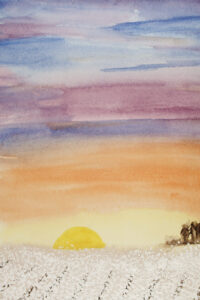 This painting was created by Dr. Fred Bourland’s grandson, Kash Bourland, to honor his grandfather’s 50-year career in cotton breeding.

In 1970, we were still using trailers to take the cotton to the gin. Later in the ’70s, the module system was invented at Texas A&M, and now we have the bale module that is actually made on the picker as it goes through the field. Tremendous advances have been made in planting and harvest equipment.

Our state-average lint yields in Arkansas have increased 2½ fold since 1970. We’ve come a long way.

As I look out over a field packed full of cotton, I have to wonder: Is this as far as we can go?

When my 7-year-old grandson presented me with a cotton field painting he had done, I asked him if it were a sunrise or a sunset. He shrugged and said he didn’t know.

If it’s a sunset, it would be indicative of my career. If it is a sunrise, I believe it is indicative of what the future holds for plant breeding and cotton breeding. I think there are some exciting things around the corner.

Dr. Fred Bourland is a cotton breeder at the University of Arkansas Division of Agriculture Research and Extension, Fayetteville.