Home » Cotton's Agenda » Neonics Not The Cause

Neonics Not The Cause

The National Cotton Council is encouraged by some recent articles in which bee experts are saying that pesticides, including neonicotinoids, are not a primary cause for bee health decline.

What are these scientists saying?
In spite of the perception that pesticides are the cause for honeybee and native bee decline, T’ai Roulston, a bumblebee expert at the University of Virginia, disagrees. He states in the Genetic Literacy Project’s (GLP) newsletter that a fungal gut parasite is the most important factor in the rusty patched bumblebee’s decline. In the article at http://bit.ly/2oJJnJa, the professor says this bumblebee species (recently declared endangered) and related species have been in sharp decline since the 1990s before the widespread use of neonicotinoids (neonics).

The article also quotes Sam Droege, a highly regarded U.S. Geological Survey wildlife biologist, who stated habitat loss is by far the greatest threat to wild bee species. Regarding neonics’ effects on wild bee populations, Droege says they are not intersecting with rare, conservation-concern bees because those pollinators are not going to be on ag lands. A 2015 study published in Nature Communications found, in fact, that those wild bees most often present in ag areas — and probably most exposed to neonics — are “common” and “dominant.” The article notes large-scale field tests that have exposed wild bees to neonic seed-treated canola crops have shown no adverse effects. A study from Germany and one from the United States also have demonstrated that residues in the nectar and pollen of neonic-treated crops and nearby vegetation are below a level of concern. 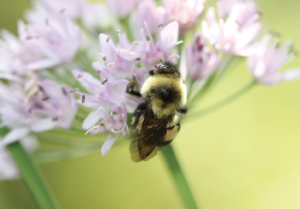 A leading bee expert says a fungal gut parasite, not neonics, is the most important factor in the rusty patched bumblebee’s decline.

Another GLP newsletter article said the European Commission found the European Union’s 2013 ban of certain neonic uses “has had no benefit at all for bees” and “has been disastrously counterproductive.” The article pointed to a study that showed since the neonics ban, British farmers have more than quadrupled insecticide application numbers on oil-seed rape, but pest pressure has increased.

University of Tennessee Institute of Agriculture researchers found that honeybees’ overall health actually improved in the presence of agricultural production, despite the increased exposure to pesticides. Details from their study are in a Phys.org article at http://bit.ly/2pwoDs5. Phys.org is a leading Web-based science, research and technology news service.

Has the NCC advocated for maintaining neonics?
Last year, the NCC successfully intervened in a lawsuit to protect the continued use of neonic seed treatments. We have explained to the court and to the Environmental Protection Agency that the loss of additional chemistries such as neonics will decrease mode of action rotation and encourage pest resistance development. We continue to work with the agency to find solutions that do not undermine production agriculture. We believe one potential method is developing state and tribal pollinator protection plans. These bring beekeepers and other stakeholders involved in on-farm plant protection chemical applications together with university experts and state lead agencies to identify local solutions that improve the coexistence of bees and crop protection.