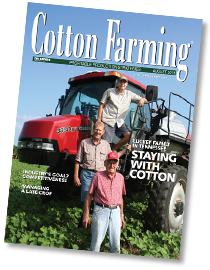 The National Cotton Council continues to press for lint contamination prevention, with the understanding that it is imperative for our industry to maintain its global reputation as a quality fiber supplier.

What are primary contamination sources?

Old and new contamination sources challenge zero tolerance efforts. We’ve learned the hard way how wind can carry litter, mostly in the form of discarded plastic film bags, from urban/suburban areas to cotton fields. A more recent contamination source has emerged with the discovery of plastic mulches in baled lint. For example, if cotton is planted in fields where plastic mulched vegetables were previously grown, the risk is dramatically increased for introducing intact plastic film into the ginning process and ultimately baled lint. Similarly, where intercropping occurs among cotton and vine crops such as mulched melons, the risk of picking up that mulch during harvest is magnified.

The most recent U.S. cotton crops saw an uptick in reported contamination incidents by spinners and shippers. “Cotton Contamination Incident Reports” have been submitted to the NCC, which documents the types of foreign material and, in some cases, tracks the foreign materials back to a growing region, state or geographic area in a state. Where bales were visually inspected after bagging and ties were removed, several spinners used permanent bale identification (PBI) tags to identify the gin where the contaminated lint was baled. When gins receive a contamination report from the spinner or shipper along with PBI tag numbers, the cotton often times can be traced back to the fields where potential con-taminants were present.

Until 2012, U.S. textile mills, with one or two exceptions, did not use in-line foreign material detection units. Last year, though, one U.S. mill that was experiencing serious contamination issues with some U.S. cotton growths began experimenting with a sophisticated foreign particle separation unit that could identify and remove a wide range of foreign particles from the cotton lint stream. After the potential for removing the foreign materials was successfully demonstrated, the mill invested in several of these expensive detection units. Most mills still rely on costly hand labor to visually inspect lint for potential contaminants. So, regardless of mill efforts, continued vigilance by producers, ginners and warehousemen is required to reduce mill contamination costs.

The literature from a NCC contamination prevention display at the 2013 Beltwide Cotton Conferences has been made available for download at the NCC’s Quality Preservation page, www.cotton.org/tech/quality/index.cfm. Also on that page is a link to “Contamination Prevention Guidelines,” which provides a template to assist an individual or company in developing its own guidelines. Because production, ginning and handling practices can differ, these guidelines may not apply equally in all circumstances. I am pleased to report that the industry responded enthusiastically to our push for proper handling and removal of round module covers. The NCC also is nearing completion of a downloadable video on contamination prevention that, like the other NCC resources, will be updated as needed.