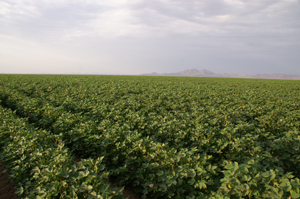 Native American farms in the Western United States are making strides to ensure they are prepared to meet the demands of cotton’s international market, and often in remarkable and technical ways.

There is some agriculture on most of the tribal land in California, Arizona, Nevada and New Mexico. This consists of everything from avocados in Southern California to tepary beans and melons on community farms in Central Arizona. Most of the farms are small and provide little real income to the tribes.

But, along the Colorado River and in the agricultural area of Central Arizona, thousands of bales of cotton are coming from tribal farms.

Traditionally, cotton has been used by Native Americans in the desert Southwest for food and fiber for thousands of years. Archaeological digs at Snaketown along the Gila River in Central Arizona have revealed roasted cottonseed fragments dating back 1,400 years.

Gossypium thurberi is a variety of cotton that is native to the Arizona desert and a parent variety to modern production cotton. The native plant was harvested by Native Americans in the wild and eventually grown in small plots along the perennial streams and rivers in Arizona.

In the early 1900s, Pima cotton was developed on the tribal land of the Gila River Indian Community (GRIC) in Sacaton, Ariz.

Today, five tribes have large farming operations with cotton land in California, Nevada and Arizona. Those farms each grow at least 2,000 acres of cotton using many advanced technologies, including GPS systems and yield monitoring.

Farm manager Greg Sprawls says in the past couple of years the average yield on the tribes’ farm has been roughly 3.7 or 3.8 bales per acre. The tribe receives an ample allotment of some of the lowest priced water in the Southwest from the Colorado River.

In the past, and always aware of the need to build demand for their cotton, the CRIT proposed a marketing campaign emphasizing their Native American origins. Bale packaging was designed to highlight the fact that American Indians grew the crop. There was enthusiasm from Japan regarding the product, but there was no price advantage, so the program was dropped.

One of Alvarez’s big focuses is water. An established pattern of water surveys allows him to know where to focus his efforts to conserve water use in an area where consistency of flow is hard to predict.

Recent weather pattern shifts on the vast tribal land have led to difficulties on the smaller traditional community farms that rely on captured water and rain for their melons and beans. Alvarez is able to pump water from the deep aquifer that lies under the land.

Ak-Chin Farms, south of the Phoenix Metro area, is using space age technology to track planting and harvesting data on its 16,000 acres of farm land.

Farm manager Steve Coester, in conjunction with the University of Arizona and Arizona Machinery, is currently setting up GPS systems for efficient planting and data collection on harvest. At some point, the system will be able to monitor for water and nutrient needs.

Other large scale Native American cotton operations, including Gila River Farms in Central Arizona and Avi Kwa ‘Ame Farms along the Colorado River in the Mohave Valley, are staying on top of current trends through electronic tracking, agronomic monitoring and on-line marketing.

Brent Murphree is the Cotton Board’s Regional Communication Manager for the West. Contact him via email at bmurphree@cottonboard.com.