California received near-record rains and snow this past winter, filling reservoirs to the brim and prompting irrigation districts to allocate full water supplies. But cotton producers say the precipitation did little to eliminate the uncertainty caused by years of “regulatory drought” that reduces surface water supplies available to agriculture.

“The biggest problem continues to be that we don’t know how much water we’re getting in December or January,” says Roger Isom, president and CEO of the Fresno, California-based California Cotton Growers and Ginners Association. “When it’s April, we’ve already had to make decisions so it’s almost impossible to plan like that.”

2017 marked the first time since 2006 that growers on California’s Westside, a large swath of Class I soil on the west side of the San Joaquin Valley from Merced to Bakersfield, received 100 percent of contract deliveries from the federal Central Valley Project.

But the U.S. Bureau of Recla­mation, which operates the CVP, didn’t announce 65 percent allocations until late March and didn’t announce full water deliveries until April 11.

“The good news is this year we’re up in acreage,” Isom says. “Had we received a notice of 100 percent earlier in the year, we would have had even more acreage, especially on the Pima side. I know growers would have been growing more cotton, how much I don’t know.”

Uncertainty Complicates Planning
Dan Errotabere — who farms a mix of permanent and row crops, including Pima cotton, near Riverdale — was able to take advantage of the increased water allocations. He planted additional Pima on some of his fallowed acreage.

“The only crop you can plant that late and react to a late allocation is cotton,” says Errotabere, managing partner of the family-owned Errotabere Ranches.

He also has installed about 16,000 miles of subsurface drip irrigation on nearly all of his crops, allowing him to stretch meager water supplies.

In mid-August, Errotabere already had begun tentatively mapping out his crop plans for 2018. His nut orchards are priority because of the long-term investment he has made in them.

Errotabere says he won’t start firming up the remainder of his planting plans until October or early November, when he has to commit to processor contracts for cannery tomatoes and garlic tonnage.

“It makes it difficult to make that type of commitment on a broad base of acres,” Errotabere says. “We’re having to make that commitment prior to knowing anything about what the water year will look like from the regulatory aspect.”

He’ll likely wait to finalize plans for the remaining fields until late winter or early spring when he hopes to know more about the water outlook.

The uncertainty about water not only makes planning from year to year difficult but further complicates developing five-year business plans.

“To develop a five-year plan with a water system that’s governed by regulations rather than hydrology, you have to work with numbers that are extremely conservative,” Errotabere says. “Investments and capital im- provements are muted because you just don’t know about water for one year or five years.”

Full Deliveries Came Too Late
During peak agricultural production, the sprawling Westlands Water District delivered CVP water to about 600,000 acres of agricultural land west of Fresno. In 2015, when the district had a second straight year of zero federal allocations, about 220,000 acres of Class 1 soil were fallowed, says Westlands public affairs representative Gayle Holman, citing the district’s annual crop survey. In 2016 when the district received 5 percent of federal allocations, the number of fallowed acres was 175,000.

Although figures aren’t in yet for 2017, she estimates about 167,000 acres went unplanted.

“We did have 100 percent (allocations), but it came so late in the year,” Holman says. “We’re not going to see much of a benefit of full water delivery until probably next year.”

Favorable Snowpack
San Luis Reservoir, which historically is nearing its lowest point by early September, stood at 1.8 million acre-feet as of Sept. 15. That’s 89 percent of capacity and 200 percent of historical average.

She says the massive snowpack, which continued to feed runoff through the summer, helped keep San Luis levels high.

“It’s a unique year for growers, but they don’t know what to do one year to the next,” Holman says.

Because of the unknown and whether growers will be able to carry over unused surface water allotments to 2018, the district is encouraging them to pre-irrigate fields and orchards this fall and winter. 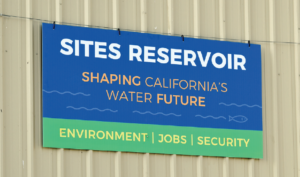 Until the 1990s, growers who received federal Central Valley Project surface water could pretty much plan on full deliveries each year unless a drought reduced precipitation, snowpack and accompanying runoff. In 1992, Congress passed the Central Valley Project Improvement Act, which redirected at least 800,000 acre-feet of mostly agricultural water annually to fish and wildlife uses.

Precipitation falls unevenly in California, with the northern part typically receiving significantly more than the south. During the winter and spring, pumps in the Sacramento-San Joaquin River Delta help convey runoff from the north across the Delta and into San Luis Reservoir to the south. There it is held until summer, when CVP and State Water Project contractors deliver it to farmers for irrigation and Southern California cities for industrial and residential uses.
As part of the CVPIA, the U.S. Bureau of Reclamation — which operates the pumps — has to consult with the National Marine Fisheries Service and the U.S. Fish and Wildlife Service to protect a handful of threatened and endangered fish in the Delta. At times when the fish are present, operators have to curtail or shut down pumping so the fish aren’t caught in the machinery.

Critics say models currently used to predict fish presence don’t portray an accurate picture and too often shut down the pumps unnecessarily when fish aren’t nearby. Instead, they’ve advocated for better science and real-time fish monitoring.
They also point out that the pumps are just one of many stressors in the Delta contributing to the fish decline.

Dan Errotabere, a producer of diversified crops near Riverdale as well as a Westlands Water District board member, points to proposed legislation that could provide some short-term relief to what he calls a “regulatory drought.”

• House Resolution 23 — known as the Gaining Responsibility on Water Act or GROW Act by David Valadao (R-Hanford, California) — would change how the CVP and State Water Project are operated. Among its provisions is one that would require water dedicated to fish and wildlife through the CVPIA be replaced and provided to Central Valley Project water contractors. H.R. 23 passed the House 230-190 in July and heads to the Senate. In the long term, Errotabere says he holds out hope for a number of proposed water-storage and conveyance projects.
• In 2014, California voters passed the $7.5 billion Proposition 1 water bond, which includes about $2.7 billion for public benefits from water-storage projects. The California Water Commission is currently reviewing funding requests for 12 different projects totaling $5.8 billion. It is expected to announce results later this year and in early 2018.
• The proposed 1.8 million acre-foot Sites Reservoir is an off-stream storage project north of Sacramento. During wet winters, it would receive diverted Sacramento River water, storing it until needed during the dry summer. Up to 400,000 acre-feet would be earmarked for downstream environmental uses. With a price tag of about $4.4 billion, Sites could be completed as early as 2029. The Sites Powers Authority is seeking $1.6 billion from the state water bond.
• The proposed 1.26 million acre-foot Temperance Flat Reservoir would provide additional upstream storage on the San Joaquin River above the current Friant Reservoir located east of Fresno. Supporters are seeking $1.33 billion from the state water bond.
• The proposed $15 billion Twin Tunnels — consisting of two 35-foot tall, 35-mile tunnels — would convey Northern California water around the Delta, delivering it into San Louis Reservoir. Long-time supporter Gov. Jerry Brown has promoted the California WaterFix project as a solution to the troubled Delta plumbing. The state is looking to fund it through revenue bonds issued by water districts that would benefit from it.