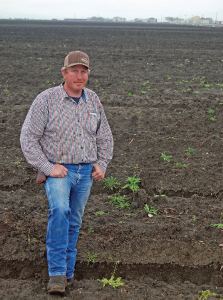 Ever since he was 3 years old, Chad Crivelli — a diversified row-crop producer near Dos Palos, Calif. — has wanted to be a farmer. But California’s 5-year-old drought coupled with mandated irrigation delivery cutbacks have dampened this 36-year-old producer’s enthusiasm for the profession.

“This year is the first time ever that I don’t want to be a farmer,” says Crivelli, who farms with his father, Bill Crivelli, as well as on his own in Merced County.

But he is not alone. Faced with uncertain water supplies, farmers throughout California have been strained economically and increased fallowed acres by nearly 60 percent during the past four years, according to a NASA study.

In 2015 alone, the project documented more than 1.03 million acres in the California Central Valley that were left unplanted throughout the year, an increase of 626,000 acres compared to 2011.

The top six counties in 2015 by total fallowed acreage were Fresno, Kern, Kings, Tulare, Merced and Yolo. And both Fresno and Kings counties recorded increases in fallowed acreage of more than 95,000 acres apiece compared to 2011.

For 2015, the drought had an economic impact on the state’s agriculture of $2.7 billion, according to a research project led by Richard Howitt, a University of California, Davis, professor emeritus of agricultural economics.

Cotton Falls Victim To Drought
At its peak in 1979, California’s cotton plantings occupied 1.6 million acres. This year, the state’s growers are expected to plant 201,000 acres, including 155,000 acres of extra-long staple or Pima varieties, according to a National Cotton Council planting intentions survey.

That’s still an increase from 2015, when California growers planted about 162,000 acres of cotton, including about 116,000 acres of Pima, according to figures from the California Pink Bollworm Program.

The number of cotton gins throughout the San Joaquin Valley also has fallen from a high of 299 in 1963 to just 29 today. But Roger Isom, president and CEO of the California Cotton Ginners and Growers Association, says those numbers are a bit deceiving because modern gins are much more efficient than those from a few decades ago.

“We have much higher capacity gin stands today,” he says.

Zero Allocations The New Norm
Industry leaders and growers point to a number of factors that conspired to create the proverbial perfect storm against cotton, beginning with the 1987-1992 drought. During that period, both state and federal water contractors reduced deliveries to agriculture.

Even as a wet winter broke the dry spell, the 1992 Central Valley Project Improvement Act permanently redirected at least 800,000 acre-feet of water away from agriculture for environmental uses. And much of that water was formerly used to irrigate farmland on the San Joaquin Valley’s Westside. (An acre-foot, about 326,000 gallons, can meet the annual water needs of a family of four to five.)

For both the 2014 and 2015 seasons, the Bureau of Reclamation made zero water allocations to federal water contractors — including those on the Westside — south of the Sacramento-San Joaquin Delta.
As of press time, the bureau had not announced allocations for 2016. But Johnny Amaral, deputy general manager of external affairs with the Westlands Water District west of Fresno, says they’ve been told to expect zero deliveries for the third straight season.

The last year for which Westlands’ growers received substantial surface supplies was 2011, when an unusually wet winter permitted the bureau to deliver 80 percent of contracts.

Amaral says the continuing drought is only a small part of the equation, pointing to the state’s reservoirs that were built to store water during wet years for use during dry periods. Instead, he places most of the blame on the CVPIA, the Endangered Species Act and biological opinions for protected fish.

“The travesty of all of this is we were above 100 percent (snowpack) or more in January,” he says. “February was a dry month and we lost some of that when all of that runoff was coming off. Instead of taking advantage of that, (the state and bureau) let over 700,000 acre-feet flow into the ocean just because of the biological opinions. It just defies logic and common sense.”

Because of environmental mandates, Amaral says the state could lose up to 2 million acre-feet of water this year.

Isom agrees. “The drought hurt us, but it’s not the only thing. We lost some acres to nuts and we lost some to other commodities like processing tomatoes. But far and above, it is the biological opinions.”
Between 2005 and 2009, when the biological opinions were being implemented, cotton production dropped to 190,000 acres from 667,000 acres. And Fresno County alone went from being the top producing county in the nation to No. 75, Isom says.

The loss of water supplies has spurred California cotton producers to become even more efficient than they were, he says. Producers today routinely harvest more than 3 bales per acre, using 2 to 2.5 acre-feet of water supplied by buried drip irrigation.

“It’s forced us to be innovative and find ways to get by with less water,” Isom says.

Trying To Weather Cutbacks
Dan Errotabere, managing partner of the family owned Errotabere Ranches in Riverdale, says he expects zero deliveries from the federal water project. Because of winter-planted garlic, he had to make planting plans last fall and settled on about the same acreage for row crops as the previous season.

A third-generation producer, Errotabere has a diversified mix of row crops, including garlic, processing tomatoes and Pima cotton. He also has pistachio and almond trees, permanent crops that he began planting in 1999.

“Water costs were going higher and getting scarcer, so we had to pick the crops that dealt the best returns,” he says.

Errotabere is part of a trend, Amaral says, noting that many San Joaquin Valley growers during the past 10 to 15 years have transitioned at least part of row-crop ground into permanent crops because of potentially higher returns.

Almond and walnut acreage has increased by more than 200,000 acres statewide since 2010, according to the UC report. Most of the new plantings were in fields previously growing cotton, irrigated pasture, grains and hay.

How Errotabere’s Pima acreage will fare this year hinges on the water outlook at planting.
“It’s been tougher to keep it in place because of the relative costs of running cotton and the limited water supply,” Errotabere says. “It’s one of the last crops I plant and it’s the most vulnerable to later decisions.”
Only a few years ago, Errotabere Ranches also grew fall lettuce, but that crop was eliminated because of water cutbacks. Winter-planted garlic acreage as well as processing tomato plantings also have been reduced.

Errotabere says the operation is fortunate to have groundwater to partially make up for surface supplies. But he acknowledged that users throughout the Central Valley are overdrafting the aquifer and can’t continue to do so indefinitely.

Cropping Decisions A Moving Target
The Crivellis are in a bit better position because they receive water from federal exchange contractors, water districts with senior water rights. He says they were told they’d likely receive full allocations, but the challenge for the districts will be to convey Northern California water supplies through the delta to Merced County for delivery.

Crivelli says he never knows when the delta pumps will be running, which makes irrigation scheduling nearly impossible.

“There’s no scientific method, and it changes daily,” he says of water deliveries. “We only get so much per month, and that doesn’t necessarily coincide with when the plants need it.”

The farming operation plans to fallow a significant portion of its acreage and has moved more ground into drip irrigation because it allows for more precise water management.

Cropping decisions also have become a moving target, Crivelli says. “It’s difficult. We just watch the market and weigh that against crop prices and water use. And we’ve diversified water use year-round and not just in the big summer months.”

Prices for fresh-market tomatoes, wheat, corn and processing tomatoes all are less than they were last year, Crivelli says. And returns for alfalfa, once a profitable crop because of the large number of Central Valley dairies, are “horrible.” That leaves Pima cotton.

“What makes Pima cotton look a little more appealing is we’re going to lose the least amount of money on it,” Crivelli says, adding it appears a bit more drought tolerant than upland varieties.

Even as late as March, the operation had changed plans, splitting some of the already formed 80-inch processing tomato beds into 40-inch beds for cotton.

Crivelli describes the water reductions as a “silent killer.” Producers survey their crops during the season and little seems amiss. They also may figure since they’ve fallowed acreage, they’re not spending as much on inputs.

But he says when producers review production records after harvest, they note lower yields because of reduced or poorly timed irrigations and lower water quality. They also may not have accounted for fixed costs, which are incurred regardless of the acreage farmed.

“You look back at the end of the year and see you didn’t make any money,” Crivelli says.

San Luis Reservoir, located south of the Sacramento-San Joaquin Delta, was designed to store water captured during winter and spring runoff for using during the summer.

California’s complex plumbing system involves several reservoirs and canals designed to capture mostly winter precipitation in the north state, store it and then deliver it to southern areas where demand is greater.

The Central Valley Project, consisting of about 20 Northern California reservoirs, was built by the federal government beginning in the 1930s. Operated by the U.S. Bureau of Reclamation, the CVP is designed to handle about 13 million acre-feet. An acre-foot, about 326,000 gallons, can meet the annual water needs of a family or four to five, according to the California Department of Water Resources.

The State Water Project, built in the 1960s and 1970s, was designed to handle about 4.23 million acre-feet. It is operated by the Department of Water Resources and serves mostly urban areas in Southern California.
In recent years, conveying Northern California water across the Sacramento-San Joaquin Delta, an estuary southeast of San Francisco, has become a challenge. A set of large pumps at the south end of the delta pull water across for eventual delivery into San Luis Reservoir. From there, water is conveyed via the California

Aqueduct and other canals to Westside agriculture and Southern California.
But the pumps can only operate at maximum capacity if federally protected fish, including the delta smelt and longfin smelt, are not nearby. If fish are present, the pumps must significantly reduce operation or completely shut down to avoid entraining, and possibly killing, the fish.

As a result, water project operators have not been able to fill San Luis Reservoir to average levels for several years. In the past, San Luis was filled during the winter and spring and provided water to agricultural and urban users to the south in the summer.

State and federal water project operators also must release flushes of cold water down several rivers, including the Sacramento, American and San Joaquin, when federally protected chinook salmon or steelhead trout are migrating upstream to spawn.

These requirements are part of biological opinions rendered under the Endangered Species Act.
In addition, water project operators must maintain specific freshwater flows into the delta to prevent salt water from moving upstream.