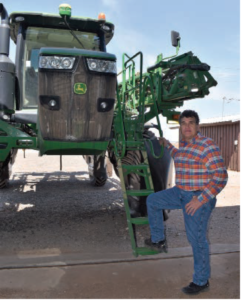 Murray Williams — Rann Williams’
father — was named U.S. Cotton
Farmer of the Year by Cotton
Farming magazine and chairman of
the Cotton Board in 1980. Today,
in keeping with his father’s belief
in service to the industry, Rann
serves on the board of directors
for Cotton Incorporated — Photo
by Pam Caraway

In 1906, the year before Oklahoma was granted statehood, the Williams’ family traveled in a covered wagon from Texas and homesteaded east of Altus. W.W. “Luck” Williams was a small-time farmer, and his son, Murray — who loved cotton more than anything in the world — started farming full-time right out of high school.

“We also raise wheat and have a cow-calf operation, but cotton was king to my father, and it is to me, too,” Rann says. “When choosing varieties, yield, quality and disease resistance influence our decision. We work closely with Doug Cossey who not only is our seed rep but also a great friend I can call on day or night.”

“All the irrigated fields loaned for more than 55 cents per pound, and the highest was 55.41 cents,” Rann says. “We also had a dryland patch that loaned like irrigated cotton — 54.81 cents per pound. All of our cotton graded at the top of the scales.” 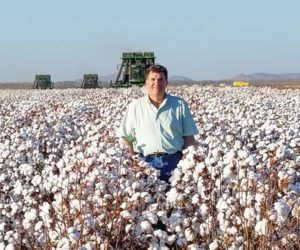 Their efforts were noted recently at a gathering of the Bayer CropScience Maximizer Club, which recognizes cotton farmers who plant FiberMax varieties and harvest at least 1,000 pounds per acre under dryland conditions. For the 2017 season, M.R. Williams & Sons was also recognized for having the most qualifying acres — 624 acres.

In addition, the Oklahoma farmers are three-year members of the FiberMax One Ton Club, which recognizes growers who harvested 2,000 pounds of lint on irrigated ground using FiberMax varieties.

Before passing away in October, Murray visited the farm and said he knew it was a great crop. Following harvest, the family calculated that the patriarch who started his career with small acreage had ginned more than 500,000 bales of cotton in his lifetime, including the 2017 crop.

“We counted this past year because Dad was alive when we started harvesting,” Rann says. “For us, it’s bittersweet that we had a record crop and he wasn’t here to see it through. But he also would have been telling us we didn’t do something right because he was a perfectionist.”

The 2017 season began with good soil moisture. Immediately after planting, the brothers applied a quart of paraquat with their John Deere R 4038 sprayer to clean up early season weeds before the cotton emerged. In late June, they put down a 43-ounce rate of Liberty in a post-emerge application.

“If you spray the weeds when they are 3 to 4 inches tall, you can knock them out,” Rann says. “We also use a 20-gallon rate of water when we apply Liberty, and it does a tremendous job.”

Roundup is applied in a separate application for grass control. And at the end of the season, hand-hoe crews come in to clean up any escapes. It was common knowledge that Murray Williams took great pride in keeping his land weed-free, and his sons do what’s necessary to keep it that way, too. 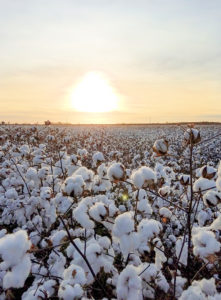 Rann says their biggest challenge in 2017 was having to replant about 1,700 acres following a prolonged wet, cool spell right after the initial planting.

“Seedling disease set in, and the cotton was pretty sick,” he says. “The good news is that FiberMax stands behind their product and gave us free seed to replant.

The Williams brothers depend on their crop consultant, Andy Harrison, to watch for weeds and insects. Their No. 1 insect pest is early season thrips followed by fleahoppers. Rann says the Bt gene controlled the worms so they were not an issue in 2017.

Harrison also makes plant growth regulator recommendations. In 2017, they put out 10 ounces per acre of PGR in some fields and 24 ounces in others. They take soil samples to determine what nutrients are needed to meet their yield goal of 4-plus bales per acre. This year, the brothers applied gypsum to correct some high pH issues in the soil. 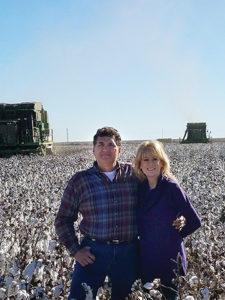 Rann Williams and his wife,
Kerri, are surrounded by the farm’s
record-breaking 2017 cotton
crop. “We were so pleasantly
surprised at the yield and so
thankful to God for His blessings,”
Kerri says.

For efficiency, they take advantage of variable-rate application. They also have the capability to apply fertilizer through subsurface drip irrigation water. The system was designed and installed by Eco-Drip.

“We have about 750 acres under drip irrigation in addition to our furrow irrigated acres,” Rann says. “Two irrigation crews work two 12-hour shifts seven days a week to keep everything running smoothly during the season.”

For the past 30 years, M.R. Williams & Sons has hired S&J Harvesting in Uvalde, Texas, to get their cotton crop out of the field. The only exception was from 2011 to 2013 when the area was in a horrific drought and the farm didn’t produce 1 bale of cotton.

“They can get the cotton out quicker than we can, and I can focus on making and marketing the cotton,” Rann says. “Jack Parker and his brother and their crew can bring in eight machines and knock out our acreage in a matter of days. Getting the cotton to the gin faster saves the quality, which is so important in the marketplace today.

“Sometimes I think Jack was probably born on a cotton picker. He can set a machine and not leave any lint on the stalk. Jack takes great pride in his work.”

The cotton that comes from M.R. Williams & Sons is ginned at Humphrey’s Co-op where Rann sits on the board as vice president. The facility is in Jackson County south of Altus. They market 100 percent of their cotton through the seasonal pool at Autauga Quality Cotton Association in Prattville, Alabama. Rann also sits on this board and works with Jeff Thompson, the company’s Mid-South manager. 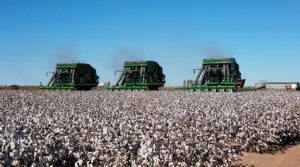 Although they hire S&J Harvesting to pick the cotton, the Williams brothers have their own module truck and module-hauling business. They haul all of their own modules as well as the other farmers’ modules that Parker picks for. They also will custom haul for other gins if needed.

It’s no secret that southwest Oklahoma can be a tough area to grow cotton at times. And farming consists of a lot of hard work. Rann says what keeps him inspired to keep going each day is building on his father’s accomplishments.

“To me, he’s a legend in cotton as evidenced by his service to agriculture,” he says. “Dad was a pioneer and an innovator. He was a deacon in the church, but out here on the farm, he pushed us. He expected a lot out of us. It’s an honor for both my brother and me to try to follow in his footsteps.” 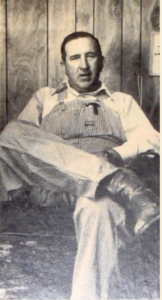 Editor’s note: This is an excerpt from the form submitted by the Williams family nominating Murray Williams for the Oklahoma Agriculture Hall of Fame in 2006. He was the first cotton farmer to receive this honor.

“He does what he loves and loves what he does.” This statement describes Murray Williams’s lifelong love affair with agriculture. Williams is exemplary of the agriculture industry in Oklahoma. He was born the eighth child to W.W. “Luck” and Georgia Ann Williams….His legacy includes three generations of successful farming in Jackson County.

As a youngster, Williams milked cows on the family dairy farm, chopped and picked cotton, tended 4-H club show calves, and worked hard to help his family make a living during the Great Depression years of the 1930s….When he graduated from Ozark High School,…he began farming on the halves for his father in 1944. Williams started renting other land in 1949 and bought 160 acres in 1957. He and his wife, Lurlene, went on wheat harvest to Kansas and Nebraska for several years to help finance their purchases of Jackson County land. Today, he oversees a family farming operation consisting of almost 6,500 acres. As a tribute to Williams, both of his sons have followed in his footsteps and are partners with him in the farming operation.

An innovative farmer, Williams has worked diligently for soil and water conservation. He was the first farmer in Oklahoma in the late 1960s to use the new, state of the art, pre-plant cotton herbicide Treflan. Williams jumped at the opportunity and has had great success in weed control. A great deal of change has occurred in Oklahoma agriculture over the past 40 years, and Williams has stayed abreast of the changes.

He was the first in this area to implement the installation of laser-guided drainage pipe that would aid in the removal of salt water from the soil to make the land productive again. Williams was also the first to build tail-water pits that allow for recycling of irrigation water to help conserve water storage in Lake Lugert-Altus.

He operated the first four-row cotton picker in Oklahoma, built the first cotton module in the state, and along with his two sons owned and operated his own cotton gin from 1989 to 1998. Some of the same field hands have worked for him for over 30 years.

Being civic-minded, Williams has given generously of his time and financial support to make our state a better place to live. His family is active in the Altus First Baptist Church where he has served many years as deacon….

In addition, he has donated his land and time to Oklahoma State University for cotton test plots to further enhance cotton production in the state….

Williams is deeply committed to his wife, his two sons, his daughter, his five grandchildren and his three great grandchildren. His roots are deeply planted in the rich, fertile farmland of Oklahoma.