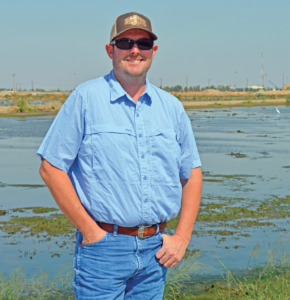 Cotton producer Travis Fugitt was one of a handful of Kern County growers who pushed up berms around fallowed fields and flooded them to create temporary percolation ponds.

During the six-year California drought that ended earlier this year, Travis Fugitt watched as the standing water level in his wells dropped to about 250 feet from 160 feet.

A fourth-generation producer of cotton and diversified row and tree crops near Bakersfield, California, he and his family had no choice but to increasingly turn to groundwater after the local Kern Delta Water District slashed surface water allocations due to the extended drought.

This year, the district was able to make full surface water deliveries, thanks to a record Sierra Nevada snowpack and accompanying runoff that filled the state’s reservoirs. But the uncertainty created by the drought as well as water-related regulations has made planning for the future “almost impossible,” Fugitt says.

“Uncertainty is the rule here,” he says. “It’s a political nightmare.”

Fugitt points to the Sustainable Groundwater Management Act as one of many reasons for his uneasiness.
Signed into law in September 2014 by Gov. Jerry Brown, the legislation requires groundwater sustainability plans that will balance water extraction with recharge in over-drafted and critically over-drafted groundwater basins and sub-basins.

Depending on the overdraft severity, groundwater plans must be completed and adopted by 2020 or 2022, and all basins must achieve groundwater sustainability by 2040, according to the legislation’s timeline.

“I think we’re going to have to do some fallowing in this part of the state, but as far as how much, nobody’s put exact numbers to that,” he says. “But ask me in two years.”

Groundwater Recharge
The Kern Delta Water District, which delivers surface water to Fugitt and other producers south of Bakersfield, serves about 92,000 irrigated agricultural acres. It’s main water source is the Kern River, on which it holds water rights, as well as about a 10 percent supplemental supply from the State Water Project, Mulkay says.

Since the early 2000s, Kern Delta has had a groundwater recharge program that involves nine recharge basins totaling 720 acres scattered across the district, he says. Together, they have an annual recharge capacity of about 121,000 acre-feet. During years with plentiful precipitation, excess water is pumped into the basins where it seeps through the soil and into the groundwater.

“We are all trying to do the best we can to add additional recharge and keep local water local as much as we can,” Mulkay says.

Because of record snowpack and runoff this year, the district expanded the recharge concept to the grower level.
Fueled by incentives from Kern Delta, many growers — including Fugitt — pushed up small berms around fallowed fields with porous soil to create temporary percolation ponds. They then delivered surplus surface water, allowing it to seep down to help replenish groundwater stores. Altogether, growers created about 1,000 acres of temporary percolation ponds, Mulkay says.

“This is just a one-time event because it was a 250 percent water year,” he says. “These last six or seven years of drought, our groundwater was depleted like everyone else’s.”

The percolation ponds could boost groundwater levels by about 20 feet this season, Fugitt says.

“We’re many years from getting it back to where it was, but we’re getting there,” he says.