Southeast Experts Share Information About Potential Threat To The 2019 Crop

Cotton blue disease is caused by the Cotton leaf-roll dwarf virus and transmitted by aphids. Although it is not particularly worrisome for producers at this point, it has caught the attention of researchers, Extension personnel and others who work with farmers in parts of the Southeast.

The University of Arizona’s Dr. Judith Brown, who has extensive expertise in plant pathology (virology and vector biology), says, “Cotton blue disease has been associated with the exotic Cotton leafroll dwarf virus in Argentina and Brazil. The virus is thought to be endemic in Africa or Asia and has spread to South America only recently. During 2017, an aphid-transmitted polerovirus, was identified for the first time infecting cotton plants in Alabama.”

During the Cotton Disease Council session at the 2019 Beltwide Cotton Conferences, Auburn University plant pathologist Dr. Kathy Lawrence provided the Alabama backstory about cotton blue disease. She says she was first alerted to “a problem in the field” on Aug. 29, 2017, in a phone call from Drew Schrimsher, an agronomist with Agri-AFC. He asked her come to the field to see the cotton leaf deformation that looked a lot like herbicide damage but was not.

“On Aug. 31, we loaded up and went to visit Drew in the cotton field,” Lawrence says. “We went through three counties in the Wiregrass Region of southeastern Alabama that day looking at field symptoms, including crinkling of the upper leaves.”

She reiterated that the problem was not herbicide damage although the disease symptoms were visually similar. The group collected numerous plant samples and returned to the lab. Lawrence says she thought the damage looked like a virus. She was initially drawn to the Cotton leaf crumple virus transmitted by whiteflies. A whitefly epidemic was in full swing at the time, which seemed to support that possibility.

“Because this virus is known to appear in the Southwest, we sent the samples to Judy Brown in Arizona,” Lawrence says. “None of them tested positive, so in September we went back to the field to collect more samples. This time, the symptoms were more dramatic — stacked internodes, more leaf puckering and no flowering. We also sent those samples to Judy.

“On March 18, 2018, I received an email from her saying we had Cotton leafroll dwarf virus, commonly known as cotton blue disease. This was quite a surprise — not what we were expecting. She contacted APHIS (Animal and Plant Health Inspection Service) to let them know it existed here in the Southeast.”

Lawrence says at that point, a fact-finding mission kicked in. One of the big questions was, “What are they doing in Brazil to combat this problem?” Weed control came up because some weeds serve as a reservoir for the virus. Other options included eliminating cotton regrowth, cultivar selection and chemical control of aphids when 5 to 10 percent of the plants were infected. Lawrence says the aphid control approach was cautionary because of problems with insecticide efficacy.

“We knew the virus had to live in a plant somewhere, so we started looking for weeds,” she says.

The team collected numerous weed samples and sent them to Brown as well, but everything tested negative. This didn’t mean the virus was not there. It had just not been found in the weeds yet. However, their efforts to locate the virus paid off later in the season.

According to an April report posted by Auburn University, “In September 2018, cotton plants with similar (viral) symptoms were collected from the Alabama Agricultural Experiment Station Plant Breeding Unit in Elmore County, and the presence of the virus was confirmed by both the Auburn University Plant Diagnostic Lab and the University of Arizona….To date, the virus has been detected, through molecular methods (RT-PCR) in samples collected from commercial fields and AAES outlying units in 24 counties across cotton producing regions of Alabama, along with multiple counties in the cotton producing regions of the Florida Panhandle, Georgia and Mississippi.”

The University of Georgia Extension cotton team was making progress as well. A report posted by UGA on March 7, says, “In the fall of 2018, Cotton leafroll dwarf virus was detected in cotton plants in 14 Georgia counties. During the winter of 2019, this virus appears to infect cotton regrowth from ratooned cotton stalks and several weeds even though screening has just begun.”

Georgia cotton specialist Dr. Jared Whitaker says there are still a lot of questions surrounding the Cotton leafroll dwarf virus and cotton blue disease. One of the team’s main goals is to communicate everything they know so far and solicit the help of farmers, consultants and anyone else who regularly observe cotton fields to “keep an eye out.”

“At this point, we don’t have any issues because we have not had a yield loss,” Whitaker says. “We hope that will still be the case this time next year. But we do want to get information out there.

“If we find something of significance, we will post it on our Web page at ugacotton.com. People can go there and sign up to get email alerts when we make a new post. If anyone sees strange symptoms in the field, contact your county Extension agent or a member of the UGA cotton team.”

According to the UGA cotton team’s March 7 report, symptoms to look for include, “leaf curling, reddening and drooping of leaves, subsequent distortion of leaf growth above the nodes where reddened leaves were first observed, and shortening of upper internodes and their discoloration to deep green. Some view the symptomology to resemble that often observed with drift from herbicides such as 2,4-D, 2,4-DB and dicamba.”

If it seems logical to try to manage the issue by aggressively controlling aphids, it’s not that simple as aphids “infest a vast array of plant species in varying landscapes,” UGA’s report says.

As far as aphid control, Whitaker reminds everyone that aphids are rarely an economic pest in Georgia, and a fungus typically wipes out populations.

“If we try to control aphids in the cotton crop, we will introduce pesticides that can hurt our beneficial populations and may flare pests such as spider mites that cause economic damage,” he says. “These insects will cost us more money to control and may result in yield loss.”

‘An Ounce Of Prevention’ 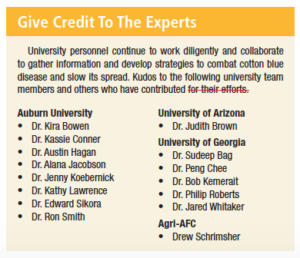 To curb the potential threat of the disease spreading and becoming more of an issue in the future, the Georgia cotton specialist recommends that producers make sure all cotton stalks are completely killed after harvest and do a good job controlling winter weeds at least three weeks prior to planting their cotton crop.

“Someone once told me that an ounce of prevention is worth a pound of cure,” Whitaker says. “These cultural practices are something that we should be doing anyway. If you are going to plant cotton and have viable cotton stalks in the field, they will take away energy, nutrients and water from your crop. We’ve also had issues where farmers don’t burn down winter weeds quickly enough to prevent insects from living in that green bridge and jumping on a young cotton crop.

“Our strategy at this point is to do what we can to keep cotton blue disease at bay until we can develop resistant cultivars to eliminate the threat of significant yield loss.”