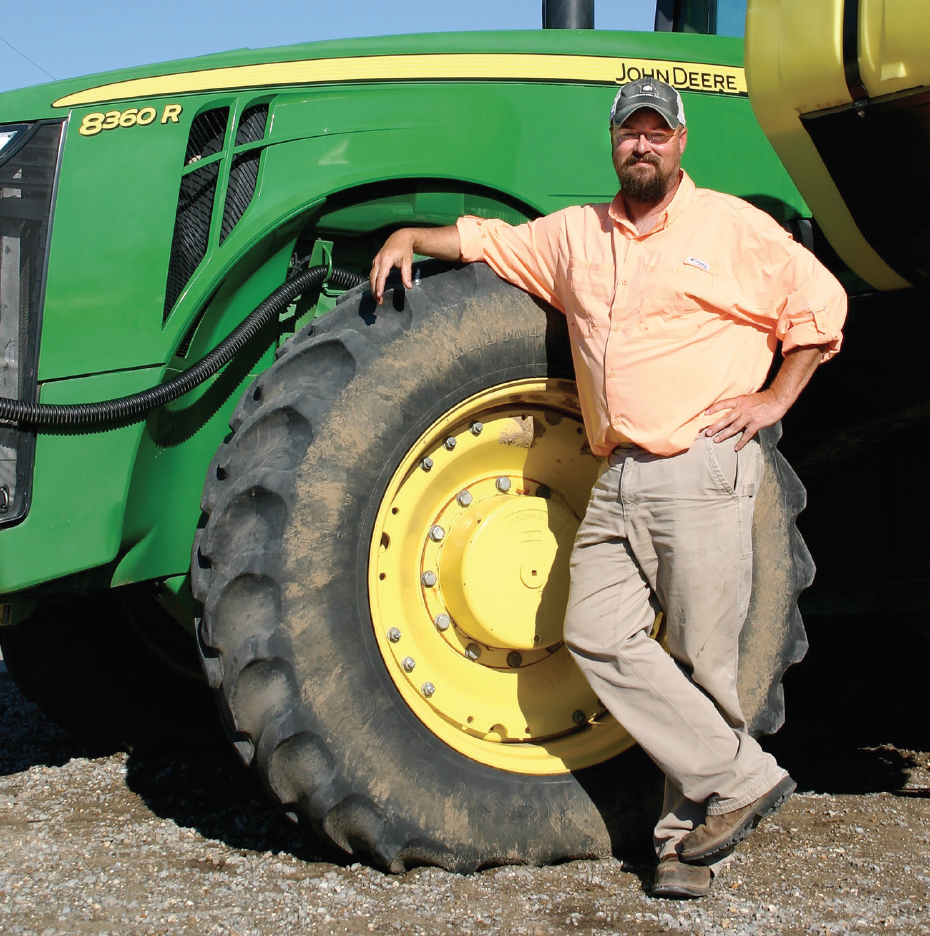 A fourth-generation farmer in Pemiscot County, Mo., Patrick Turnage keeps a photo from 1937 of his grandfather — J.W. “June Bug” Turnage Jr. — and one of his parents — Sonny and Belinda — on their first date stuck in the dome light of his pickup. “Seeing those photos every day reminds me that everything we do and how we do it is a reflection on our family,” he says. “And I feel like Grandpaw is with me, and I am still farming with him.”

Today, Turnage, his father and his uncle Duke farm 3,000 acres of cotton — half of which is furrow-irrigated — and 1,600 acres of dryland soybeans. “There are no windshield farmers on this farm,” he says. “If something needs to be done, all three of us are willing and capable of doing it.”

Always Room For Improvement
Like many farmers, Turnage looks for ways to make the farming operation more productive and efficient. While driving a picker last season, he noticed that one row of cotton was performing noticeably better than the other rows. After thinking about it, Turnage remembered that the county water district had dug a trench there to put in a new water line. Although most of their acres typically are no-till, he decided to subsoil a good portion of the land to increase cotton productivity.

“Luckily, we had a dry February and bought a John Deere Mobile RTK Signal for its precise, auto steer accuracy to put up new, straight rows,” Turnage says. “Now we can no-till again for a number of years. We also sowed a wheat cover crop on more than half of our acres to protect the cotton from blowing sand and invested in a cotton seed treatment with a bigger insecticide package.”

In another instance, Turnage recalls that when he came back to the farm after finishing school, planters didn’t have spray tanks on them and resistant pigweeds were coming fast.

“I remember spraying 48 hours straight for three years in a row chasing three planters with one tractor. ‘This is ridiculous,’ I thought. That was the light bulb moment when I invented the Cotton Tail Hoods that attach to the planter so we can plant and spray at the same time. After doing this, the pigweeds were dead and the pre-emerge herbicides had been applied. If we got rained out of a field, then no matter where the planter stopped, we were clean. And by taking me off the sprayer, I could run another planter. The hoods made us much more efficient.”

Multiple Varieties Spread Risk
The Turnages also believe in planting several varieties to avoid “putting all of their chips on one number.”

In addition to being a New Product Evaluator for Deltapine, Turnage has also conducted on-farm variety trials for years. “I like to do my own research and test all the varieties against each other,” he says. “Everybody’s dirt is different, and I want to know how a variety will perform on our farm. This year, I have 26 varieties in my test.”

The Missouri farmer also holds firm in his philosophy of not planting 36 hours before a rain is predicted to avoid planting too shallow. If it doesn’t rain, then you lessen your odds of planting successfully, he says.

Wide Circle Of Mentors
In addition to the cotton-rich legacy established and carried on by his family, Turnage is quick to share credit for the farm’s success with their consultant Tim Roberts, co-owner of TennArk Crop Service.

“From being a cotton scout to a father figure, Tim has guided me through understanding seed selection and placement according to soil type, spreading risk with multiple varieties, the importance of weed control, the why and why not’s of fertility, being aggressive on bugs, and most of all, the importance of timeliness in all of our practices. He also has played a huge role in shaping the farmer and the man I am today.

“I try to learn as much as I can from everyone I come into contact with, whether it’s Tim or the parts man at the John Deere dealership or the CEO at the bank where we borrow money. I have many mentors from all walks of life.”
When it comes to farming, Turnage strives for perfection and appreciates being surrounded by people who share his passion for cotton.

“You are only as good as your employees, and Turnage Farms has been blessed with good people throughout the years,” he says. “Another key to our longevity is the faith and commitment we receive from our landlords. It’s easy to farm for people who trust us the way they do.”

It’s The Journey That Matters

In the early 1930s, John Willis Turnage, Patrick’s great grandfather, was growing cotton in Lake County, Tenn., near Reelfoot and Hornbeak. After hearing about the big, flat fields in Southeast Missouri, he rode the ferry across the Mississippi River to Caruthersville and then walked into the agricultural area of Pemiscot County. There he struck a deal to farm the land surrounding Carlton School, a rural facility built in 1922 to educate local children.

“We still farm the ground he was farming then,” Turnage says. “I have several of my great grandfather’s cotton weigh books in which he recorded the hand-picked weights employees brought in at harvest. He weighed each person’s cotton on a scale out in the field and kept up with the weights in these books so he would know how much to pay each worker at the end of the day.

“My grandfather, father, uncle and I all grew up on this farm. I live in my great grandfather’s house today, while my mama and daddy live down the road, and my mammaw — Jean Turnage — lives in the old school house, which had been turned into a residence. I also have fond memories of Isaiah West, a man who worked for us for almost 40 years. I like to say I grew up in his back pocket.”

As a young child, Turnage sat in his dad’s lap and “helped” drive the combine. When he was 10 years old with his feet propped up on a toolbox so he could touch the floor, Turnage was cutting wheat as his father sat beside him.

“I remember Dad saying, ‘I have to go to the shop. I will be right back.’ And then he opened the door, walked off the ladder and left me driving that machine by myself. I felt like I became a real farmer that day. And I was 10 years old.

“In 1989, cotton became our main crop and quickly became my passion. Each fall, after the last bolls have been picked and delivered to Caruthersville Gin, I start looking forward to growing it again next year. A love of cotton is in my blood.”