The Missouri Bootheel region has always had a reputation for producing high-quality cotton. However, it takes a united effort from producers and ginners to maintain such an enviable record of achievement.

One example of how this region’s ginning sector is committed to delivering superior cotton can be found at the Farmers Union Gin in Senath, Mo.

This historic gin had its beginnings in 1906, but it wasn’t until 1980 that a new chapter began. That’s when a group of eight persons led by producer Charles Parker and the late George Paul Harris bought out the previous owners and took over.

From that point forward, the gin has implemented an aggressive approach toward expansion and technology. Such a philosophy has continued to reward the gin’s owners as well as producer customers.

That might explain why on any given day you can find Parker, gin manager Steve Harris, gin superintendent Billy Johnson or co-owner David Harris at the gin conferring with customers. Communication is non-stop before ginning season begins.

This was an unusual transition because the original owners consisted of 126 stockholders. However, nobody today can doubt the resolve of the new ownership. Ever since the gin moved to its current site outside the Senath city limits, it has expanded and updated its operation nearly every year.

For example, the gin put in a “wrapper system” to handle round modules in 2007. Each year, some kind of equipment upgrade is installed in an effort to process cotton more efficiently.

“When you see something that needs to be changed or improved during the fall gin season, you need to be prepared to make that change before the next gin season,” says Steve Harris, gin manager.

“We’re in a competitive market, and that has to be our philosophy if we want to keep our customers as we look to the future.”

One of the prime examples of that forward thinking occurred recently with the construction of a new seed house on the gin property.

As Parker describes it, the gin was shipping seed out all the time during ginning season, so additional space was necessary – especially since 28,000 to 30,000 tons of seed are handled during a normal year.

When a visitor drives onto the Farmers Union Gin property, new warehouses and a modern looking facility are easily visible. No remnants of the past can be seen, although there is a history that stretches back more than a century.

A tour of the gin’s interior reveals an IntelliGin system and equipment from all of the major ginning manufacturers. For the gin’s owners, it’s a case of doing whatever is necessary to remain competitive and preserve lint quality for producers. 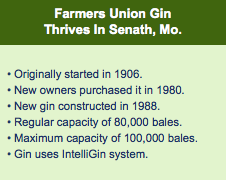 “With these lower cotton prices, I think producers feel the need to get the best possible grades at the gin,” says Parker. “I believe that all of our gins in the Missouri Bootheel do a good job of preserving cotton quality.”

“I’d like to think that we deliver cotton that has good consistency,” says Harris. “We never seem to encounter a problem with neps or uniformity.”

One reason for the gin’s ability to deliver high-quality cotton might be because of the close relationship with local producers. Any problems that might occur are discussed openly between the gin and producer.

For instance, if the IntelliGin monitor shows that grades are lower than expected on a producer’s cotton, the gin will confer with the producer and discuss the problem.

Harris says there are many factors that the ginner has no control over once the cotton is harvested. However, a ginner can check equipment inside the gin to make sure that everything possible is being done to preserve and protect lint quality.

“To be honest with you, we don’t have too many problems,” says Harris. “And that is a testament to the producers we have here in the Missouri Bootheel region.”

As both a ginner and producer, Parker has a serious investment in cotton. He knows that his fellow producers depend on the gin to process their cotton and deliver high-quality grades.

For that reason, he is prepared to go through difficult crop seasons because it’s a cycle he has seen in the past.

The veteran farmer also knows that the Missouri Bootheel offers that rare combination of excellent soil, water availability and stable weather.It’s a formula that helps cotton production and ginning thrive in this part of the country.

“As far as we’re concerned, we will keep growing and ginning cotton for the forseeable future,” says Parker.

“We know how to adapt. We also know how to have good communication between the producer and ginner. In other words, we are very blessed in what we have here and don’t take anything for granted.”

Producer Steve Droke has had a working relationship with the Farmers Union Gin for many years, and he trusts the gin to process his cotton in a timely, efficient manner.

“It’s a case of customer service – pure and simple,” he says. “When you look at that gin from the outside and walk around inside it, you know it’s a first-class operation. They know how to do business the right way.”

Droke, who farms mostly cotton on his acreage, says there are never any surprises when it comes to the grades his cotton receives at the gin. That, he points out, is because of the communication between the gin and producer.

If problems occur while a producer’s cotton is being processed, the communication from the gin is swift and to the point.

“That’s what I mean about customer service,” Droke says. “They take care of the farmer, and there aren’t any secrets. Everything is out in the open. That’s what it’s all about.”