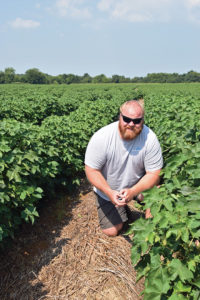 Pigweed was getting the better of Adam Chappell in 2010 when he decided he had to rein in weed control costs if he and his brother were to stay in farming. He turned to cover crops combined with no-till farming.

“We were fighting pigweed just like everybody else,” says Chappell, who farms with his brother, Seth, near Cotton Plant, Arkansas. “We were dependent on chemicals and we were just losing the fight. We were spending way more than we expected to make just trying to stay clean.”

As the host of one of 12 Arkansas Discovery Farms, Steve Stevens wanted to set a good example and decided to try cover crops and no-till in 2012 to reduce any potential nutrient runoff from his farm. What reinforced the need for covers was when University of Arkansas Extension cotton specialist Bill Robertson wondered why the moisture sensors placed in Stevens’ field were not detecting any irrigation cycles when Stevens had applied water three times.

“There’s something called soil structure, and we didn’t have any because the water was just not moving within the soil,” says Stevens, who farms near Tillar, Arkansas.

Although Chappell and Stevens tried cover crops and no-till for different reasons, they both say they’re committed to continuing the system because they’ve seen benefits far beyond their initial goals. At the same time, cover crops coupled with no-till have helped them reduce overall production costs and strengthen their bottom lines.

Matt Fryer, a University of Arkansas soil instructor, says he has seen a small but growing interest in cover crops among growers.

“I think by and large there’s a lot of interest, and I think that’s predominately because of the hype people hear on social media,” he says. “But I think the adoption rate is going to be much slower because cover crops change the whole production system.

“There’s a lot of uncertainty in ag right now, so adopting new production practices and basic changes in the system just add more uncertainty. Despite that and the peer pressure to resist change, real benefits exist that need to be realized by producers and quantified by scientists.”

Fryer is in the process of establishing 25 cover crop demonstration sites throughout Arkansas. So far, he has established nine, of which seven are currently planted to cotton.

He also is reaching out to county agents to identify potential grower-cooperators for the remaining demonstrations. Each site involves two fields — one with cover crops and no-till and the other without cover crops and the farmer’s standard cultivation practices.

Over each demonstration’s three-year life, Fryer will collect information on several indicators of soil health, such as water infiltration rates, runoff quantity and quality, and weed management.

As part of the project, he also will enlist a university economist to conduct an economic analysis of each practice.

He compared the various components of soil health to pieces of a puzzle. At the end of the project, Fryer says he hopes to be able to offer science-based data that will help growers piece together that puzzle. 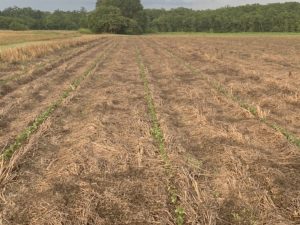 When Chappell decided to try cover crops and no-till, he found scant information. He ended up looking at resources for organic producers, since they can’t use synthetic weed control products.

Eventually he found a successful organic pumpkin grower in Pennsylvania who used cereal rye and no-till and had a clean field. That inspired Chappell to drill cereal rye into crop stubble on 300 acres.

“We saw an immediate reduction in pigweed,” he says.

Chappell has since expanded the use of covers and no-till to their entire 8,000 acres each year. With wet conditions during the 2018 harvest, he wasn’t able to meet that goal and ended up planting covers on about half their ground last fall followed by another quarter in January.

When he first began using covers, Chappell was apprehensive about how tall they would grow, so he planted them later after harvest and terminated them much sooner than he does today. Now he follows the cotton picker or combine with a no-till drill to give the plants as long as possible to increase biomass before termination at planting.

“Early on, we started killing weeds early,” he says. “As we got more comfortable, we just let them get bigger and bigger for a big, thick mat.”

The key to good cover termination is a two-pass burndown, Chappell says.

He may use Roundup for the first pass, followed 24 hours later by paraquat and Diuron as a pre-emerge on the second pass.

Chappell then rolls the cover and follows right behind with a John Deere 7300 MaxEmerge planter for cotton. The trick is good, sharp openers and a little more aggressive closer on the back, he says. 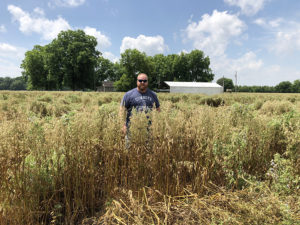 Chappell also has experimented with different cover crop blends and tailors them to the crop that will follow. Depending on the market, he may use a three-year rotation with cotton, followed by corn and soybeans.

He always includes a radish and grass species in the cover blend. If cotton or corn follows, he’ll add legumes, such as vetch and Austrian winter pea. If soybeans follow, he’ll leave out the legumes and go heavier on the grasses since soybeans fix their own nitrogen.

“There are just so many more benefits from the diversity of the different plant types,” he says. “It’s just something we learned. The more stuff we added in there, the less problems we had.”

The system has proven so successful that Chappell grows only non-GMO soybeans under contract for which he receives a premium. This year, he decided to experiment with cotton on 76-inch rows and planted PHY 350 W3FE.

Because the cotton wouldn’t canopy over the wide middles to shade out weeds, Chappell wanted to be able to apply an in-season herbicide over the top of the crop.

The goal is to see if he can reduce the seeding rate to 20,000 seeds per acre — or about half the typical planting rate on 38-inch beds — and still make a profitable yield.

Adding Animals To The Mix

Beginning with the 2018-19 winter, he added cattle to the mix, taking skinny cows and grazing them during the winter. After putting 350-400 pounds on the animals, he sells them in the spring.

“We’re really trying to figure out how to make the animal thing work,” Chappell says.

Over the years, he has seen his herbicide, fertilizer, fuel costs, and equipment wear and tear decrease significantly. Although he may not produce “bin buster” yields, Chappell says they are still good. Coupled with reduced inputs, they result in a stronger bottom line than when he used conventional tillage without cover crops.

What may not be as apparent is how the cover crops and no-till have improved his soil health. Soil organic matter was about 0.5% when he started; now it is about 2%.

Water infiltration also has increased, and he’s cut irrigation use by about 50% with cover crops and collapsible poly tubing. And for the past three years, tissue and sap samples showed potassium and phosphorus levels were adequate so none was needed. 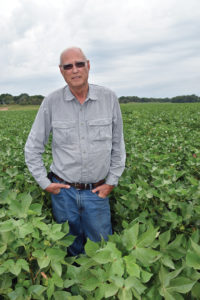 Shortly after the conversation with Robertson about the lack of irrigation water infiltration, Stevens planted cereal rye at 55-60 pounds per acre on half a field in the fall, leaving the other half as an untreated check. The seed runs about $12-$15 per acre.

“A lot of people look at it as an expense – it really isn’t,” he says. “It’s one of the things that will way more than pay for itself.”

“That not only gives you more water-holding ability, but it brings you three times as much soil nutrients because you’re pulling from a lot bigger area,” Stevens says.

Much like Chappell, Stevens was initially leery of allowing the cover to grow too tall. As he gained more experience and increased the amount of ground he planted to covers, he now allows the cover to grow until he’s ready to plant.

To avoid the $6.50 per-acre aerial application charge, Stevens waits until after the stalks are cut and broadcasts the rye using a spinner. In January or February, he’ll spray the cover with 2,4-D for broadleaf weeds.

Critical to making his system work, Stevens says, is returning between planting and cotton emergence with an application of a residual of choice and 1 quart paraquat, which will lay the cover down.

Each year, Stevens has tried to increase his cover crop plantings by about 20%.

When combined with collapsible poly tubing and Phaucet — a computerized hole selection program — cover crops have allowed him to reduce groundwater use by about 40%. That also means 40% less fuel to pump water and 40% less wear and tear on the pumps.

In addition, samples of water leaving the farm contain almost no nutrients.

“We can capture more rainfall because of the cover crop, using less groundwater and making us more sustainable,” he says.

How To Get Started With Cover Crops

■ If you’re interested in dipping your toes into cover crops and no-till, start simple with a single cover species, such as cereal rye, and with only one to three fields.

■ As you become more comfortable with cover crops, try adding one or two more species, such as a brassica, radish and legume, to increase diversity.

The alliance is a grower-led non-profit designed to educate fellow producers about how to improve soil health. It partners with several groups, including the Natural Resources Conservation Service, Arkansas Association of Conservation Districts, Arkansas Grazing Lands Coalition, the University of Arkansas and Arkansas State University.

Print & Email
cover crops groundwater university of arkansas water conservation 2019-09-01
Vicky Boyd
Previous: Market Maintenance A Must
Next: Give Yourself A Break