GINNER OF THE YEAR 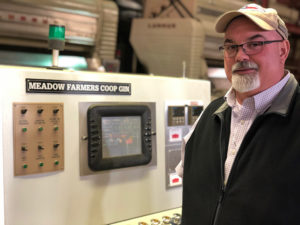 ‘‘I am a second-generation ginner who grew up in a gin office and literally took my first steps there,” says Dan Jackson, manager for Meadow Farmers Co-op Gin in Meadow, Texas. “My dad, Max Jackson, ran a small gin east of Lubbock — McClung Co-op — and my mom, Mary Jane, was the bookkeeper. We eventually moved west of Slaton where I attended public school at Lubbock-Cooper.

“After graduating from Lubbock Christian University, I worked in outside sales at Sam’s for a short time, then joined Consolidated Bearing, a gin supply company, for a little more than a year. This connection led me to Kress, Texas, and Swisher Co-op Gin in 1996. In May 1999, I married my wife, Michele, and moved to Roscoe, Texas, where I managed Roscoe Gin for three years. We relocated to Meadow in 2002, and I have been at Meadow Farmers Co-op Gin for the past 18 years.”

Where It All Began

The Meadow facility has a great history. Jackson says the original gin was held by a bank in Dallas when a group of producers got together in 1934 and bought it for $27,000. This included the building and five 80-saw Continental steam-powered gin stands.

Part of the deal was that the bank had to pay all of the back taxes from 1934 and provide $500 for gin repairs. It also had to furnish a carload of coal to run the gin the first year.

In February 1935, the facility was acknowledged as a cooperative in the state of Texas and began operating as Meadow Farmers Co-op Gin. The original gin building is gone today, but the new plant is in the same location.

Improvements Along The Way 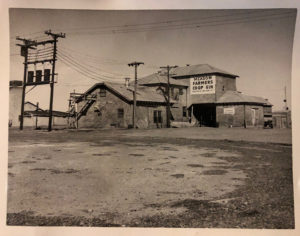 The original Meadow Farmers Co-op Gin was a steam-powered plant that had been converted to electricity at the time this photo was taken.

Meadow Farmers Co-op is a four-stand Lummus gin plant with a Continental 930 press. The gin bought a Kimbell module feeder and built a new module shed out front in 2006. They added a Signode strapper and installed a new console in 2008. Two years ago, the press pumps were updated to increase efficiency. The condenser was moved up and back, which helps at the press, and a new addition was completed recently to extend one side of the building.

“These improvements allow us to gin cotton in a timely manner and do a good job for the producers to ensure grades and quality are what they need to be,” Jackson says. “I am grateful to our board for being supportive and helping us make the gin better. It’s not a brand new plant, but I think our efficiency speaks for itself.

“But then it didn’t rain for five years. We are not completely out of the drought, so our average production has fallen off considerably. Right now, we are producing between 28,000-30,000 bales per year. But we are optimistic those good years will come back.”

Johnny Najera, the gin superintendent, has been at Meadow Farmers Co-op for 40 years. He grew up on Beasley Ranch and was the foreman there when Alvin King recruited him to come to Meadow in 1980.

“Johnny is the real Ginner of the Year,” Jackson says. “He is a forward-thinker who always embraces the new technology we have added through the years. He does an outstanding job hiring and handling our crew in the fall. 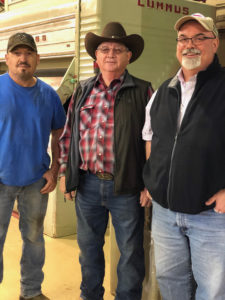 “My ginner is Jaime Sanchez, who has been with us for more than 25 years. He actually operates the plant and is in charge of the console. During the off-season, Jaime and Johnny are tasked with making repairs to get the gin ready to go for next season.”
Jennifer Perez is the office manager for Meadow Farmers Co-op Gin. She runs the workplace, keeps the books and markets the producers’ cotton.

“I am blessed to work with such talented people in each of these positions,” Jackson says. “We work well together as a team. If I ever have to leave the gin for any reason, I never worry about driving away.

“In fact, our entire gin crew is a pleasure to work with. Everyone has bought into being efficient, taking care of our customers and working to be the best at what we do. We treat each farmer’s crop as if it is ours and treat them like we would want to be treated.”

Some members of Jackson’s seasonal crew have been coming back to work at the gin for 15 years.

“They do a phenomenal job,” he says. “It’s difficult to find locals who want to work, so we are thankful to these guys who faithfully return to help us. We like to show them our appreciation. For example, we bring in steaks for everyone if we bust a shift record to let them know their efforts don’t go unnoticed.”

“Safety is paramount at our facility,” he says. “Along with circulating safety information the Trust sends us, we have weekly safety meetings in the fall. We also attend the Ginners School and the safety seminars.

“Our crew has really bought into the safety side of ginning. In fact, Johnny, Jaime and myself are certified safety trainers with TCGT and are very proud of that. Johnny helps conduct our safety meetings in Spanish and makes Spanish presentations at the safety seminars in Lubbock in August and September.”

Jackson says the safety seminars, sponsored by the TCGT and TCGA at different locations throughout the state, are part of an aggressive safety program and have made a big difference in the industry.

“I would put our program up against anybody’s in the insurance business, period,” he says.

Najera has traveled to gins in South Texas during its season to conduct onsite safety training.

“They reciprocate by sending their guys up here when we are ginning to do the same thing,” Jackson says.

Although the gin hasn’t run a night crew since 2010, most workdays cover at least 12 to 14 hours, followed by employees making repairs to the plant in the evenings.

“I am blessed to have a family who supports me,” Jackson says. “Our crazy schedule in the gin business makes things pretty interesting at times. My wife, Michele, is a certified language therapist. She also is a literacy coach at Region 17 Education Service Center.

“We have 15-year-old twin daughters, Kylee and Emma, who both participate in FFA. Kylee also likes to show stock, and Emma plays basketball and is a competitive cheerleader. They keep us busy.”

Jackson’s father, Max, is 92 and still enjoys participating in the industry.

“I am a TCGA Life Member, and Dad is a Life Member as well,” he says. “We get to sit down together once a year at the TCGA Life Member Luncheon in Lubbock. That is quite a gathering in one room, and we always enjoy it.”

When asked about his reaction to being named the Texas Ginner of the Year, Jackson says he was honored to even be considered for the award.

“Never in my wildest dreams did I imagine I would get that call from Tony,” he says. “It was totally unexpected, but I am very honored. I grew up with the Texas Cotton Ginners’ Association and enjoy being a part of it.

“I am blessed with a great family and great people to work for and go to work with every day. I can never thank the good Lord enough for that.”