Home » Cover Story » Get The Dirt On Soil

Get The Dirt On Soil

Regular Sampling Provides Nutrient Status, Taking Much Of The Guesswork Out Of Soil Fertility

Mississippi State University Extension cotton specialist Brian Pieralisi likes to look at soil as a kind of bank account into which you make nutrient deposits and the plants make nutrient withdrawals. And much like a financial account, if you don’t periodically check your nutrient balance through sampling, you won’t know what your soil has in savings.

“I think as long as you know your history and what (crop) you’re following, you would be good if you keep your sampling to every three years,” he says. “You still have a pretty good idea what’s going on. But you need an understanding of your soils, the nutrients and removal rates.”

“These faster fruiting early season cultivars require a tremendous amount of potassium for boll set,” he says. “Knowing the P and K stats will let you make better economic use of inputs on the fertilizer side versus just putting out what we historically did.”

Eddy Cates, a Marion, Arkansas, consultant who does grid soil sampling as a service for his farmer-customers, agrees.

“We can do 2.5-acre grid sampling for $6-$7 per acre, and you’re spreading that over three years,” he says. “That’s a very minimal cost, and that information is so valuable to use to make a decision. You’re going to make a decision for the crop for the whole year according to that.”

Regardless of the cropping system, Pieralisi says it would be wise to pull samples more often if you have recently leveled a field, changed rotations or picked up a piece of ground. The test results can identify possible changes in soil texture, pH and/or nutrient make-up. 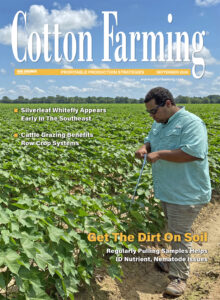 In the Southeast, many growers have their fields sampled annually, which is often driven by retailers, says Alabama Extension cotton specialist Steve Brown.

“Obviously, you’re not going to be addressing pH that frequently, but I do think — particularly with potassium that’s a key nutrient for us — knowing where you are and the trends in the soil are very valuable and very important for us to know.”

The best time to pull samples is shortly after harvest to allow enough time for lab results and any fall applications that might need to be made.

“You need to make it the same time every year and that’s typically in the fall,” Brown says. “You’re doing it far enough ahead so if you need to make a pH adjustment, you have time to put out lime.”

Typically, there are two systems for soil sampling. One is based on zones, the other on grids of usually 2.5 to 5 acres each.

If you’re going the zone route, divide the field into uniform sampling areas, based on like soil textures, surface soil colors, crop yields, plant growth or other variables. When deciding how large a zone to represent by one composite 15- to 20-core sample, don’t consider the acres but rather the variability of the area.

A large, uniform field may warrant only a single composite sample, while some highly variable fields may need to be split into two or more smaller areas for sampling.

If you only pull one composite sample from a large, variable field, recommendations based on the soil test may cause you to overfertilize some parts of the field and underfertilize other parts.

“One thing to consider with all of these fertilizer recommendations generated from the lab is they’re only going to be as good as the samples you take,” Golden says.

Soil moisture conditions also should be suitable for plowing. Using a soil probe or auger, sample 6 inches deep, and pull the soil cores following a random zig-zag pattern within each zone.

Try to obtain a representative sample and avoid unusual spots, such as lower areas that remain wet or have salt accumulation.

In addition, pull samples from the row middles to avoid fertilizer banded areas.

University research has shown that at least 15 to 20 random cores from each zone are needed to represent an average of that area. Collect the cores in a clean plastic bucket to avoid metal contamination.

Break up large clods or lumps, spreading them out and allowing them to dry at room temperature. Thoroughly mix the soil sample by hand after it has dried before scooping out about 1 pint of the mixture into a soil sample box available from your county Extension agent, university Extension soil testing lab or private soil test lab.

Label it carefully to ensure identification, and include a map or sketch of the farm or field showing the area sampled. This helps with accurate recordkeeping of the soil test results. 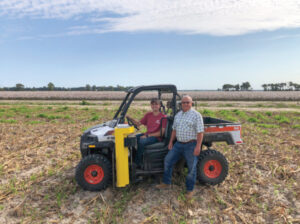 Arkansas crop consultant Eddy Cates and his son, Austin, work together in the business and agree this Bobcat 4×4 hydraulic soil probe is a time-saving tool in the field — photo by Carroll Smith

With grid sampling, a field is typically divided into 2.5- to 5-acre grids, and a set of cores is pulled at each grid intersection.

Cates has offered the service to his customers for about 10 years.

For the past two years, he and his crew have used a hydraulic soil probe attached to a Bobcat all-terrain vehicle. Guided by GPS, the vehicle operator stops at the designated spot, the probe pulls a set of cores and the driver continues on. Before that, Cates’ crew pulled samples by hand.

Once he receives the soil test results from the laboratory, Cates uses software to create fertility maps showing nutrient variability across the field. The information also can be used to create variable-rate fertilizer prescriptions and application plans.