Defoliating and harvesting a cotton crop is like painting a picture. Unless everything is mixed together perfectly, the finished product won’t be that good. Some have even suggested that the entire exercise (defoliation and harvesting) is an art form, and it’s all about timing.

Maybe that’s an exaggeration, but that is how many farmers approach these important events at the end of a long season. If you talk to Missouri producer Lewis Rone and son Justin in Portageville in the Bootheel region of the state, they might agree with that assessment.

They certainly understand the unpredictable nature of f inishing out a crop and harvesting it before the first frost sets in. Unfortunately, that comes with the territory when a farmer grows cotton. And, not surprisingly, every day is crucial in the northern part of the Cotton Belt where the growing season is shorter.

Dealing With Weather
Unforeseen events can always change the strategy on how to manage the crop so that defoliation and harvest can occur on time. Heavy rains in May and June definitely created problems for Missouri cotton producers.

However, in the end, the Rones (father and son) are persistent in their analysis of data. They work with their consultant Tim Roberts as well as Andrea Jones, Missouri Associate Extension cotton specialist.

The Rones have a diverse crop mix involving soybeans, corn, cotton and rice. Cotton comprises about 10 percent of the acreage this year. Corn and rice acres will each be less than 10 percent, and soybean acreage is close to 50 percent. Twenty percent of the acres were lost to spring rains (prevented planting) and Mississippi River flooding. 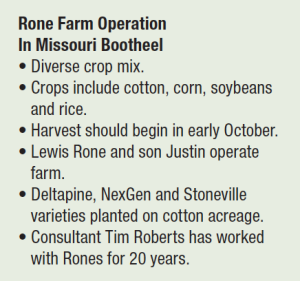 It’s an interest ing scenario to watch this father and son duo work together. Justin is one of four children in the family who graduated from the University of Missouri. He went on to become an attorney and worked in Rep. Jo Ann Emerson’s office in Washington before returning to work on the family farm.

“We try to find a happy medium when making decisions on any crop,” says Lewis. “Sometimes Justin asks me questions, but I usually don’t give him my answer until he gives me his. That’s when we compare notes.”

Justin says it’s all about mutual respect for the other person’s opinion.

“We definitely discuss everything,” he says. “It’s a real team effort involving the family, our consultant Tim (Roberts) and Andrea (Jones).

Crop Catches Up
The Rones have dealt with a season that started late because of the rain in May and June. Now, in a bit of irony, the area has received scarcely any precipitation since August.

Still, there is optimism about potential yields on the cotton acreage planted to the following varieties:

Roberts, who has consulted nearly 20 years for the Rones, believes harvest and defoliation are on schedule.

“I think we’ll be harvesting cotton in the first week of October, and I feel confident that we’ll be ahead of the first frost,” he says. “In the past, we’ve defoliated as early as August, but that is rare.”

Roberts consults for farmers in the Missouri Bootheel as well as West Tennessee. He has high praise for the cotton qual ity produced by Missouri producers.

He also believes the Rones are prime examples of diligent and meticulous farmers who believe in utilizing research data and the best management practices.

Whether it’s having a proactive approach to control resistant pigweed, utilizing new technologies or planting varieties that fit the Missouri Bootheel soil profile, he says the Rones are always in search of anything that improves their cotton.

“The Missouri Bootheel is an excellent region for growing cotton,” says Roberts. “The ground is sandy loam, and it has a lot of moisture-holding capacity. The region can also withstand drought.

“You also have temperatures that are three to four degrees lower than other regions. This can extend the growing season for corn, cotton, milo or rice.”

We try to find a happy medium when making decisions on any crop.”– Lewis Rone, Producer, Portageville, Mo.

Important Teamwork
Unquestionably, this is the time of year when teamwork is essential for a successful defoliation and harvest of a cotton crop. That’s why the Rones have confidence in the support they receive from Roberts as a consultant, as well as Jones at the nearby Delta Center across the highway.

“I am glad to have Tim on our team, and it’s an understatement to say how much we rely on Andrea and her research at the Delta Center,” says Lewis.

If the weather cooperates, it promises to be another successful cotton crop. If that happens, the hard work of a long season will have paid off in a big way.

Andrea Jones likes to share information and conduct timely research for producers in the Missouri Bootheel.

In her position as Associate Extension cotton specialist, she works with all cotton producers in the region. However, her relationship with the Rone family is unique because their farm is located across the highway from the Fisher Delta Research Center in Portageville.

It makes for a very helpful situation when Jones can conduct research trials on the Rone farm – such as this year’s 42-acre strip trial. Another researcher at the Delta Center – Dr. Peter Scharf – conducts a similar trial. The Rones also share equipment in case there is a need at the Delta Center.

“I can’t say enough about Lewis and Justin and the rest of the Rone family,” says Andrea. “They are very generous with us in case we need something. Through the years, I have borrowed boll buggies and polypipe rollers from them.”

The Rones have also donated two hippers and two cultivators to the Delta Center in the past five years. “

This is the kind of special relationship we have with producers in the region,” says Andrea. “And it makes our work so enjoyable.”

And what does Lewis Rone think about the situation? “I’m just being a good neighbor,” he says with a laugh. “It’s a winwin situation for all parties.”