Monitoring soil moisture and scheduling irrigation doesn’t have to be complicated to be effective, as one Texas High Plains grower finds.

When it comes to soil moisture monitoring, David Carter of Levelland, Texas, likes to keep it simple.
The same consultant who scouts his fields for pests during the season — Darrell Kitten — also reads his soil moisture sensors weekly. Factoring in the plant’s growth stage, soil moisture readings and the upcoming week’s weather forecast, Kitten provides Carter with irrigation recommendations. 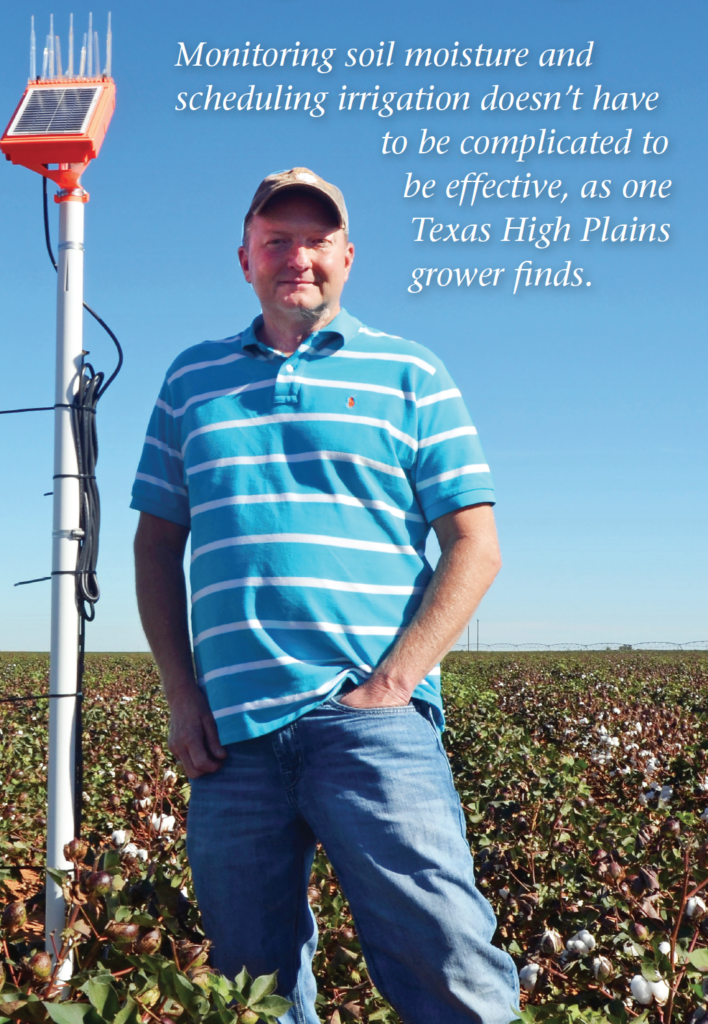 Moisture Sensor Pilot Program
During 2016, Carter was part of a pilot project through his agricultural retailer where he also had two high-tech moisture sensors in a cotton field — one from San Diego-based AquaSpy and one from Phytech, an Israeli company.
The AquaSpy system has soil moisture sensors every 4 inches to as deep as 48 inches. Growers can access the hourly updated data — which includes water, nutrients and temperature — from desktop computers, laptops, tablets and smartphones. The system also can be set up to send text alerts.

AquaSpy also reports the data in easy-to-understand graphs showing trends and how they relate to target zones.
The Phytech system involves a remote weather station, soil moisture sensors, a water meter on the drip line if drip is used, and dendrometer sensors. Placed on the plant trunk or stem, a dendrometer sensor measures minute changes in trunk diameters. Data can be accessed via computers or smart devices. The system also can be set up to issue field alerts if measurements exceed predetermined parameters.

As of late September, Carter said the two high-tech systems provided results similar to those of the soil moisture sensor readings.

“For us, the ‘cool’ factor is way up there,” Carter says. “But I’m already doing that with my crop consultant. I’m already monitoring our available water and water use every week. We’re not getting a lot of new information with the summer we just had. We had no decisions to make — we turn the water on, we get a big rain and we turn it off. We pump what we can.”
One question Carter says he posed representatives with the two sensor companies was how will the devices help him improve his bottom line. He has not yet received an answer.

Many of his neighbors already have installed the AquaSpy, and Carter says he hasn’t ruled out eventually putting a unit on his farm.

‘Deficit Irrigation Is Very Real’
Carter farms over the Ogallala Aquifer, a massive underground lake that is suffering from significant overdraft. The High Plains Underground Water Conservation District, which covers the 16-county West Texas area from south of Lubbock to the Panhandle, oversees water use and water conservation measures.

In 2014, it adopted a 10-year management plan that requires well owners to report water use annually. The plan also restricts pumping to no more than 18 inches annually per acre of water rights owned.

“It doesn’t affect me down here because I just don’t have the capacity to pump that much water,” Carter says. Even during a good year, his wells only can produce about 12-14 inches per acre.
He views his irrigation as supplemental to rainfall. Even during the best years, the two combined sources don’t provide the crop enough moisture to meet full ET, or evapotranspiration rate.

“Deficit irrigation is very real for us,” Carter says. “We try to build a reserve in the winter time if possible. Hopefully, when we go to building a crop, we will have the reserves that will carry us through the hot, dry period throughout the summer.

“We always felt we could keep up pretty well with our water supply and water management until August, when water demand peaked. These devices confirmed that, but there was nothing we could do about it.”