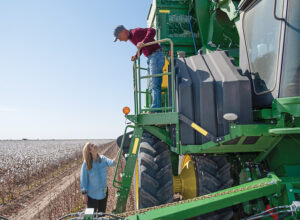 West Texas cotton farmers Kimberly and Darren Jost actively participate on the farm in addition to raising their three children: Avery, Weston and Presley — photos by Photos by Terry Brandt

The West Texas cotton production region is hot and dry with limited groundwater and an average rainfall of about 16 inches. However, in the past four years, precipitation has not reached this mark, which has proved challenging for area farmers, especially on dryland acres.

“Although we are limited by our amount of rainfall and groundwater, we are blessed with fertile soil,” says Darren Jost, who farms predominantly cotton in Glasscock and Reagan counties. “Farmers out here like to say, ‘To make a crop, we only need a good planting rain, a 2-inch rain July 1, a 2-inch rain Aug. 1 and for temperatures to stay under 100 degrees Fahrenheit.’”

Farming cotton is in Jost’s blood. Between him and his wife, Kimberly, it goes back for generations in their families. Because he always enjoyed working with machinery, Jost completed a degree in ag systems management at Texas A & M University. He contemplated looking for a job in ag engineering but realized he was drawn back to production agriculture.

“My dad, Eugene, quizzed me about my plans in my junior year, and I decided to come back home and farm,” Jost says. “We agreed that I needed to be on my own, so Dad found me a little piece of land. He was still farming his place, but he supported and mentored me when I got started. I borrowed some of his equipment, went to farm sales and bought a couple of old, worn out tractors, and used his barn for 10 years before I got my own. Fortunately, he’s only a mile away and our land joins each other’s in spots.”

Jost married Kimberly Hoelscher in 2000 and formed what they call Darren and Kimberly Jost Farms. Kimberly grew up in agriculture, so she is used to “farmer hours” and the challenges that growers face every year. They made a good team then and still do today as active participants in their day-to-day farming operation.

Before Jost transitioned to 12-row equipment to increase efficiency and reduce labor, he and his dad harvested their cotton together.

“We both had our own equipment, but we pulled together to take advantage of our labor,” Jost says. “It was a neat time. 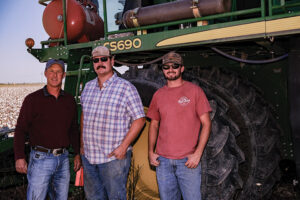 “I got lucky when I was able to hire Brandon Schaefer (center) and Ryne Dierschke (right),” says Darren Jost. “That move improved my labor situation tremendously.”

Kimberly and my mom, Marilee, also ran strippers and brought lunch to the field and the evening meal if we were going to run late. We would shut down and all eat out there together.”

Jost says the family camaraderie part of harvest season was enjoyable, but a bad labor situation was not.

“I literally had guys fistfighting out in the field,” he says. “I couldn’t take it anymore, so I bought a John Deere CS690 round-baler stripper. It was crazy expensive, but I didn’t have a choice. My neighbor bought one as well, so I have teamed up with him a couple times since we are on the same row pattern and both have 12-row equipment.

“When he gets in a slow time and I need to be running, he helps me. Then we would flip flop, and I help him. We keep up with the hours on our machines, and if there is a big difference, we just pay each other the lease rate. We have talked about what will happen when we finally have another big year and kicked around the idea of leasing a third machine. Unfortunately, we haven’t had that opportunity yet.”

Jost says his labor prayers were finally answered when he found Brandon Schaefer and Ryne Dierschke who wanted to get into farming but didn’t have the opportunity quite yet. Schaefer grew up on a family farm, and Dierschke worked on farms while in school because that is his passion. Both are college educated and capable of running any type of equipment.

“I believe God guided them here because we all needed each other,” Jost says. “They have become part of our family and our community, and both farm a little piece of ground of their own. They use some of my equipment, which is fine. It’s expensive to start farming on your own, so I try to help them. In 25 years, my labor situation has never been better.”

Darren and Kimberly Jost Farms is about one-third drip irrigated and two-thirds dryland.

“I saw how efficient drip irrigation was when my father-in-law put some in,” Jost says. “In the late ’90s, I didn’t have any land of my own, so I approached my landlords to see what we could work out. They agreed to pay for the equipment if I paid the labor cost for installing it.

“As I acquired a little land here and there, the first thing I would do is put in drip irrigation where I could. You can only install as much as your farm can handle as far as water goes.” 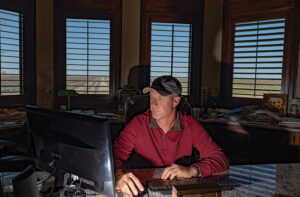 “Like every other cotton farmer, our biggest challenge is the price of our commodity,” says Darren Jost. “We can’t control it very much, but we can lock in some prices here and there.”

“On the irrigated ground, we pre-watered and then tried to water up the crop after planting,” Jost says. “Then the heat hit, and it was not nice to us. We had a lot of days with more than 100-degree Fahrenheit temperatures. We just couldn’t keep up with the limited water we have. The quality held in there, but the pounds were way down.

“Our dryland cotton didn’t come up until mid-September when we got our first rain. Obviously, that was a little late in the game. We typically try to finish harvesting by Thanksgiving, or Dec. 10-15 if we have a good crop. In 2020, I finished three weeks earlier than I ever have.”

Despite enduring a rough year, Jost says one bright spot was looking at some new varieties as a Deltapine New Product Evaluator. He has participated in the NPE program since it began in 2008.

“The biggest benefit to me is having the opportunity to preview how varieties perform on my own farm,” he says. “In my area, varieties may perform differently from county to county or even within a county.

“In Reagan County, a pair of brothers are NPE growers, so we share our experiences because the varieties may perform just a touch differently for them than they do for me. And I get calls from other farmers in the area who want to know what I am seeing as far as variety performance.

“I also enjoy attending the winter meeting when Bayer announces the Deltapine varieties that will be released for the upcoming class. I get to be around NPE growers from across the Cotton Belt and have developed friendships with these guys. It’s neat to keep in contact with them during the year.”

In the weed arena, Jost says they fight tumbleweed and some resistant pigweed. 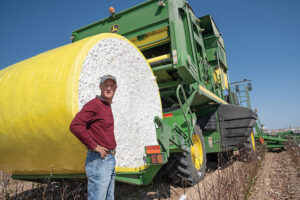 “Tumbleweed will get huge, and you can’t put them through a stripper,” he says. “Yellow herbicides help control them, but I don’t use those because I want to keep the planting window open for haygrazer or milo in case my dryland cotton fails.

Roundup Ready still controls small tumbleweed, but sometimes the only way to get them is with a piece of iron.”

Jost says farmers in Glasscock and Reagan counties are particular, clean farmers, who attack weeds early, which has probably helped keep down resistance.

“Some resistant seed may be carried in by the wind, birds or oil field traffic, but all in all we don’t have a huge resistance problem,” he says. “To target what we do have, I went to the dicamba gene. I don’t mix and match technologies because I am concerned about somebody on a sprayer getting in the wrong field.”

The primary insect pest Jost watches for is stink bug, which sometimes shows up in July and August and can be controlled with pyrethroids. He says the Bt technologies take care of bollworms with the exception of a few pockets here and there. Thrips are not a big issue, and he doesn’t have to contend with plant bugs and nematodes.

In reflecting on the 2020 season, Jost says every year is different, every year has its challenges, but there are always bright spots.

“School was canceled during the pandemic, so my kids were at home and we had more family time,” he says. “It didn’t affect our farming operation at all. We paid all our bills, and it’s already snowed this year, which will benefit our soil profile that holds moisture really well.

“I appreciate the whole cotton growing process, and I love raising my family on a farm. I enjoy the day-to-day challenges when

I have to think on my feet. Farming is my forte, and I love what I do.”