Layers Of Support Contribute To Success 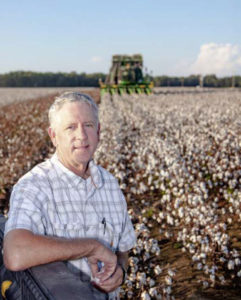 Thomas “Tap” Parker says he always loved everything about farming but did not step into a large, multi-generational operation. His mother and father, Marie “Tweet” and Bill, owned 300 acres of farmland near Lake Providence, Louisiana, along with a small gas station and fuel distributorship.

“After my father died when I was 12 years old, my mom rented the farm to Troyce Dukes, a local farmer who worked it until I graduated from Louisiana Tech University in 1985 with a degree in ag business,” Parker says.

“Coming out of college, I got an FHA loan and started farming from scratch. That first year, I farmed my mom’s 300 acres and paid her rent. After two years of borrowing from FHA, I moved to First South Farm Credit, which has been a very important partner.

“Later, I rented some additional land and have grown my business over the past 30 years. Today, my main operation is in Lake Providence, and I also operate a 6,500-acre farm in a 50-50 partnership with Berry Barham near Parkdale, Arkansas. My secretary of 20 years, Theresa Monroe, helps us keep up with all the details.”

Although Parker did not start out flush with capital, he has been fortunate to have access to people, products, organizations and programs that helped form and sustain a successful farming career. And an opportunity he had early on allowed him to bring something of value to the table as well.

Parker spent his summers during college employed by Tony Lensing and Raymond Harris, two area producers who taught him the importance of having a good work ethic and knowing what his priorities should be in a farming operation.
“College is helpful, but practical experience is much more valuable at times, especially in agriculture,” he says.

Another person in Lake Providence who supported the young farmer’s efforts to break into the business was Jack Hamilton.

This innovative farmer and ginner was actively involved in managing Hollybrook Land Co., Hollybrook Gin Co. and Hollybrook Warehouse Co. for the Amacker family in addition to running his personal farming operation.

“The first year or two when I was trying to get started, Mr. Jack helped me find some farmland to rent,” Parker says. “When I stopped by his office, he always had time to visit. Eventually, it got to be an annual thing where we would sit down and share our cost of production with each other and evaluate what we had spent on our crops. He would make me feel important.

“Jack also encouraged me to participate in the industry organizations. I once served as president of the Louisiana Cotton Producers Association, was a producer delegate in the National Cotton Council and served on The Cotton Board for 19 years.”

Cotton Always In The Mix 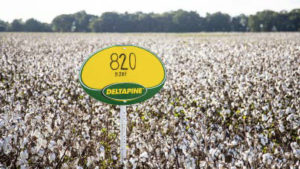 Parker has grown cotton every year even during the time when many farmers got out and switched to grain.

“Cotton supports our operation through several revenue streams so it’s an important part of what we grow,” he says. “Through the years, I always ginned at Hollybrook Gin Co. When the Amacker brothers decided to sell the gin after Jack Hamilton’s death in 2001, a group of us farmers bought it and have owned it now for some time.”

“DP 1646 B2XF produces a vigorous plant so it’s easy to establish a stand. You have to keep it in check with a plant growth regulator, but we have all figured out that smaller plants seem to do better than bigger ones. This variety always yields well and is typically is at the top of most yield tests.”

In Louisiana, Parker says he averaged 1,312 pounds per acre in 2018, and the fiber quality was good.

“That was one of my best years in terms of yield across the farm,” he says. “Grades deteriorated some at the end of the season because of wet weather, but I still wound up with about 20 basis points above the loan. I market with StaplCotn, one of the largest cotton-marketing cooperatives in the United States. It is a huge part of my operation and always gets me top dollar for my cotton.”

Parker officially participated in the Deltapine New Product Evaluator Program for the first time last year at the suggestion of his Bayer strategic account manager, Bradley Jackson. Since 2008, NPE growers across the Cotton Belt have evaluated pre-commercial variety candidates on their farms and in their growing systems.

“Last year, we had a 100-acre field where we grew three of the Deltapine variety candidates on 10-acre plots for the NPE Program,” he says. “We also conducted some NemaStrike Technology evaluations and then planted the balance of the field in DP 1646 B2XF.

“My highest-yielding variety in the NPE plot is now called DP 1916 B3XF and is part of the Class of 19. When the leaves came off, you could see it was a beautiful variety. We managed it just like we did the 1646 because it’s hard to make small-scale changes in agronomic practices efficiently. When we add DP 1916 B3XF to our mix on a larger scale, we can then tweak the agronomics if we need to.”

Parker says he participates in the NPE Program because he enjoys growing the variety candidates and being a part of what is potentially coming to market.

“As an NPE grower, it’s an interesting learning experience to see what these varieties look like in the field before they are commercially released,” he says.

During the growing season, Parker depends on his cotton consultant, Reynold Minsky, who checks the fields twice a week and then emails Parker a report.

“Reynold is a valuable part of our Louisiana operation,” he says. “I depend on him a lot for agronomic advice once the crop has emerged, and his strong point is insect control.”

Another invaluable source of information for Parker — particularly for growing DP 1646 B2XF — is Jay Mahaffey, who is manager of the Bayer Learning Center in Scott, Mississippi.

“Jay is such an asset to me and to us as producers,” he says. “We meet with him each year and always attend one of his tours in the summer. Sometimes I ask Jay to come to the office to address our managers. I really admire his mindset about growing cotton.”

Steward Of The Land

“There is an additional layer of support available if you plant cover crops so we are getting more involved with that practice,” Parker says. “The main advantage of a cover crop is to hold the soil in place and keep nutrient runoff into the lake at a minimum. It also builds organic matter in the soil and helps with weed suppression during the summer.”

His current cover crop mix includes black oats, Australian winter pea, crimson clover and cereal rye. Parker says there is a learning curve involved with growing the cover crop properly in the winter and terminating it in time to realize the biggest benefits.

“Each year, we try to improve what we do and how we do it,” he says.

Although Parker admits the wet fall impeded harvest and prevented him from getting fieldwork done for spring planting, he is still optimistic.

“Cotton is one of those crops where you can make management decisions during the season and still affect the outcome,” he says. “You can see the fruits of your labor. There is never a bad day on the farm, and I have had a wonderful career. Nolan, who is one of my four sons, is attending Mississippi State University and has shown an interest in joining the operation when he graduates.

“As I told my wife, Jennifer, I just like the way cotton smells. It contributed to my early success, and I hope it continues to be a part of what we do.”