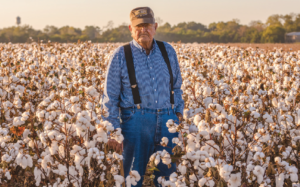 When referencing events that happened almost a century ago, most people preface their anecdotes with, “I have a photograph.” Otis Shiver begins his stories with, “I remember….”

This 93-year-old cotton farmer was born in the Rocky Hill community of southwest Alabama on the Alabama River in 1924.

Shiver’s father, T.B., moved the family to a nearby 4,500-acre, 25-mule plantation where he was hired as the farm manager. Although much of the land was in timber, they grew row crops as well — mostly cotton along with corn and velvet bean.

I just like growing cotton. I have worked in cotton all my life and that’s what I enjoy.”

“Even though we wore raggedy clothes and didn’t have any money, we always had plenty to eat,” Shiver says. “We raised our food and had milk cows, hogs and cattle. I had a good life there. My first paying job on the farm was as water boy. I was 8 years old and made 50 cents a day carrying a bucket of water out to the field hands. They plowed behind the mules and drank a lot of water.”

As World War II loomed on the horizon, Shiver, like many other young men, was allowed to finish the 11th grade and was drafted a few days after school closed for the summer. He joined the Navy and served for three years before being discharged in 1946.

Post-War Cotton Experience
Shiver married his sweetheart, Juliet Till, that same year. They later had a son, Jimmy, and a daughter, Gail. Shiver worked at Brookley Field in Mobile, Ala., for a couple years before his father-in-law, Harmon “H.T.” Till, asked him to come help out on the farm in Monroe County.

“For a time, I trained there under the G.I. Bill of Rights for about $90 a month and then continued to farm cotton with my daddy-in-law until he retired,” Shiver says. “When cotton was picked by hand, we would pull a four-wheel wagon into the field, fill it up and then take the wagon to the gin where we had to stay in line until it was our turn. My wife would come out to the field in the morning and pick cotton, while an older child watched Gail playing on a quilt under the tree. Then Juliet would go home, cook a full dinner and bring it to the field where we ate on the tailgate of the truck.”
Shiver’s son-in-law, Tuby Moore, started working with him in 1980. “My husband loved to farm,” Gail says. “He didn’t come from a farming family, but he learned fast. He worked for daddy for 21 years before he passed away in 2001. They never had a cross word. Tuby cultivated, sprayed cotton and had the chance to work with our son, Jim, for two years when Jim came back to the farm after graduating from Auburn.”

Till gave Shiver 42 acres of cotton to work in 1948, and that same land is still part of their operation. Today, Shiver; Moore; Moore’s son, Cameron Bratcher; and full-time employee James Terrell farm 600 acres of cotton and peanuts. Moore also runs a herd of 300 brood cows.

“We typically bed up the fields in the spring and start planting around May 5,” Shiver says. “I knock the beds down and Jim comes behind me with the planter. We plant cotton for a couple days and then plant peanuts a couple days so it all doesn’t come off at one time. As long as Jim is in the field, I am in the field.”

2017 Season Preview
Because of its proximity to the Gulf Coast, Moore says the farm typically receives adequate rainfall for cotton and peanuts. “We do have 200 acres under pivot irrigation to use as needed. All of our acres are conventional tillage, and we rotate cotton and peanuts to suppress reniform nematodes. Planting peanuts basically takes their food source away. The nematodes are still in the soil, but the numbers are not as high as they would be if we planted cotton behind cotton.”
Moore says they also battle stink bugs and plant bugs. After scouting the fields, they typically begin spraying for plant bugs when the cotton starts squaring. Once bolls begin to form, they spray for stink bugs.

The most troublesome weeds these farmers encounter are morningglory and glyphosate-resistant pigweed.

“We will plant some Deltapine XtendFlex cotton varieties this year, depending on availability, to take advantage of the dicamba herbicide technology,” he says. “Many of our neighbors are, too, so we all have to be sensitive to drift around peanuts in our area.”

Shiver and Moore don’t plant corn and soybeans because of a lack of grain infrastructure, such as on-farm storage bins, and the unpredictability of rainfall timing.

The Ultimate ‘Cotton Man’
Although the operation is a family affair, Shiver insists on calling one 35-acre cotton field “his.”

As the 2017 season gets underway, Shiver is looking forward to his 69th cotton crop.

“I just like growing cotton,” he says. “I have worked in cotton all my life and that’s what I enjoy. Now I have told you all I know.”