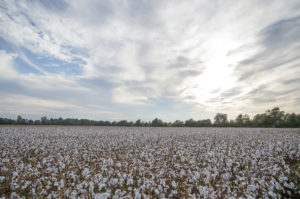 Kennett, Missouri, where cotton and other commodity crops flourish in the countryside, is in the southeast corner of the Bootheel, nestled between Arkansas and the Mississippi River.

It is also home to Don and Betty Lynn, who have farmed cotton together as husband and wife for 62 years. Even before they met and married in 1956, their lives followed a similar path. Both graduated high school in Kennett, then went north to find jobs. Don worked the wheat harvest during the summers in Canada and found employment in a factory during the winter. Betty secured a job as a hospital secretary in Flint, Michigan, but yearned to return home after a short stay up North.

“I came home after wheat harvest in 1956, met Betty, and after a whirlwind courtship, we were married,” Don says. “In the spring of ’57, we started farming cotton, popcorn and watermelons on 60 acres. We didn’t have any collateral, so we borrowed money from the Federal Housing Administration. The first year was bad, but Betty had a check from her job as an office secretary for one of the local surgeons.”

The young couple started out with a one-row cotton picker to harvest their crop, then graduated to a two-row. Don typically ran the picker and dumped the cotton in a trailer, which Betty then drove to the gin. Today, they farm 1,600 acres of cotton, soybeans and potatoes and harvest the cotton crop with two John Deere four-row pickers and two module builders.

About 60% of the farm is irrigated — mostly with seven center pivots — and 40% is dryland. The Lynns plant a rye cover crop every year on their cotton and soybean acreage, using an air seeder on the hipper.

“We plant the cover crop after we harvest the cotton and hip the ground for the following year at the same time. In the spring, we knock to top of the bed off and leave the cover crop in the middles as long as we can. I believe it helps with our pigweed problem and with wind and water erosion,” Don says. “If we didn’t have a cover crop, some of our sandy ground would turn into a dust bowl.”

In 2019, the Lynns planted DP 1725 B2XF, DP 1522 B2XF, DP 1646 B2XF and several Deltapine New Product Evaluator test plots. According to Deltapine, the NPE Program is designed to invite growers to evaluate variety candidates on large-acre plots under their own management systems and field conditions.

Don says after reviewing the numbers following harvest, 1725 was their highest yielder, making two-plus bales per acre in some fields.

“We also had good quality cotton,” he says. “The strength, length and color were good, but what I really like about the Deltapine cotton is the turnout. When I first started farming cotton, we got about 33% turnout. Now the turnout is in the 40s, which is adding a lot of yield to our crop.

But last season was not without its challenges, Don says, starting with the rain that began in October 2018 and carried into the next spring. All of the moisture created some spots in the field that the planter just had to go around.

“We had to replant about 25% of our cotton,” he says. “There’s a saying in Missouri that you can lose a crop twice and still make a good crop. That proved true last year. The second time we replanted the cotton, it came right up and had good growth on it.”

The Lynns say their most troublesome weed problem is pigweed. They make a pre-emerge application of Warrant herbicide that keeps the weeds from coming up. Then they use hooded sprayers to help control drift when applying a tankmix of XtendiMax and Roundup herbicides.

“Most of our farm is in a fairly isolated area of Dunklin County, which helps with avoiding drift onto neighboring crops,” Don says. “This weed control program works well. We did very little hand chopping this past year.”

In the insect arena, the Lynns typically battle thrips and tarnished plants bugs and occasionally spider mites, which turn the underside of the cotton leaves reddish-brown mid-season. Their cotton scout, Don Scales Jr., helps them identify pest problems in the field and makes treatment recommendations.

“We depend on Thomas and his knowledge,” Betty says.

Don says he is looking forward to ThryvOn — the new Bayer biotechnology trait coming in the near future. According to the company, it will give cotton plants increased protection against thrips and tarnished plant bugs.

When making their variety decisions, the Lynns say they always consider the results of the Deltapine NPE program.

“We have participated in the Deltapine NPE Program since it began in 2008,” Betty says. “We feel fortunate to be in the program and get to see how the varieties perform on our farm a year before they are commercially released. We attend the NPE meeting every year and have made a lot of goods friends we enjoy spending time with.”

In looking to the 2020 season, Don says they intend to plant DP 2012 B3XF, DP 2020 B3XF and DP 1725 B2XF. DP 2012 B3XF is a Deltapine Class of ’20 early maturity variety with bacterial blight resistance. DP 2020 B3XF — also part of the Class of ’20 — is an early to mid-maturity variety with bacterial blight resistance plus moderate tolerance to Verticillium wilt.

In reflecting on the past 62 years, Don says, “I can’t imagine any other life than farming. It’s been a challenge, but it’s been rewarding.”

Betty agrees. “It has been a good life — a blessed happy life,” she says. “There have been times when we didn’t think we would be able to make ends meet, but the good Lord came through and we were able to do it.”