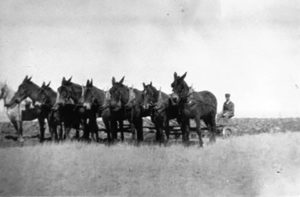 Shane McLain’s great grandfather, Roy McLain, started breaking out prairie land with a team of mules in Castro County, Texas, in the 1920s.

Shane McLain and his wife, SammiJo, operate a stripper cotton and cow-calf business in Castro County, Texas, between Hart and Nazareth. This area of West Texas is part of the Panhandle — the northernmost 26 counties in the state where cotton acreage is fast replacing grain as irrigation water becomes scarcer.

McLain is the fourth generation in his family to farm in Castro County. His great grandfather, Roy McLain, began breaking out pasture, or prairie land, there in the 1920s and started farming dryland hay, milo and wheat. His grandfather, Hubert, and his father, Allen, were farmers as well. Today, Allen has retired but still helps out during the busy planting and harvest seasons.

“When irrigation practices began here in the 1950s, the operation was primarily grain until the depletion of the Ogallala Aquifer caused the wells not to produce what they used to,” McLain says. “For example, when I started farming on my own in 2005, my weakest well produced 650 gallons of water per minute. Now those wells are pumping 50-60 gallons per minute. That changes your whole perspective on things.

“When water was more plentiful, I grew corn and some seed production milo. To adapt to our current water situation, we are now going with more cotton and cattle. Cotton is a good fit for limited irrigation, and cotton and cattle are a good rotation for us. We plant wheat to graze the cattle, and then 90% of our cotton is planted into the wheat stubble, which provides cover protection for the small cotton plant.”

“We grow FiberMax varieties because of the fiber quality,” Shane says. “They do well in our area.”

According to BASF, to qualify for the FiberMax One Ton Club, growers must produce an average of 2,000 pounds per acre on 20 or more acres planted with FiberMax varieties. Shane and SammiJo have been members of the club since 2016.

“It’s humbling to be among all the other farmers at the One Ton Club banquet who are producing high yields,” McLain says. “It inspires you to keep going, keep adapting to the times and keep trying to achieve that mark.”

McLain says they try to plant early to get the cotton going so it will mature before the first freeze arrives.

“The harsh winds and the limited irrigation still affect the crop, even with a protective cover,” he says. “We were not happy with the thin stand and debated whether to plow it up and replant. After deciding to keep what we had, we saw the field begin to flourish because the cotton had room to grow. The plant loaded up from top to bottom, which surprised us. Even at harvest, I never dreamed it would produce 2,798 pounds per acre.” 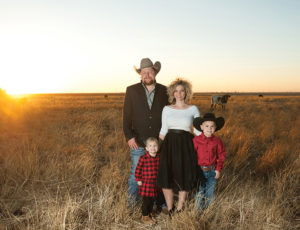 In addition to managing their business operations, Shane McLain and his wife, SammiJo, are raising their two children: daughter Gracie, 6, and son Doc, 8.

About 75% of the McLain Farms operation and 90% of the cotton acres are irrigated with center pivots. Because of the wells’ decreased pumping capacity, the pivots put out less than 2 gallons of water per acre.

“If our spring is dry, we apply a couple inches of irrigation prior to planting to make sure there is enough moisture in the soil to soften it,” McLain says. “We put out pre-emerge herbicides behind the planter and then apply water to incorporate them and help the seed sprout.

“Then we stop irrigating for about a month. When the cotton starts growing and squaring, we go to continuous irrigation since it takes the pivot eight days to put an inch of water on a circle. In our area, you have to manage every field based on the amount of water you can pump.”

Their center pivots are set up for LEPA (low energy precise application) irrigation, which features “bubblers” to avoid losing water to evaporation.

“We try to be efficient,” McLain says. “With LEPA, the water doesn’t spray out of the hoses, it bubbles out and goes straight down into the ground so the roots can find it instead of just wetting the top and evaporating.”

To help compensate for the area’s water depletion, the operation has moved to more no-till production. In what McLain describes as “thinking outside the box,” he flew on a cover of radishes and wheat for the first time last year about three weeks before harvest. He then made his last irrigation pass to get the crop started.

“After the cotton was harvested and the cover had good growth, we grazed it, moved the cows off, and then planted cotton back into the cover,” McLain says.

The most troublesome weeds he fights in cotton are pigweed, kochia and morningglory. McLain runs a lot of residuals and starts putting out yellow herbicides early in the year, about one month before planting. He runs Cotoran herbicide behind the planter and comes back with Warrant and sometimes Outlook.

“We try to keep the weeds from coming up, which seems to be the best way to maintain our weed control program,” McLain says. “We run our first shot of Liberty herbicide when the cotton is 6 inches tall. The residuals are starting to play out by then, and scattered pigweed, kochia and morningglory are coming up. We also add Roundup to almost every application for grass control. Liberty controls the broadleaf weeds.”

Other than early season thrips and the occasional fleahopper, McLain says cotton insects are not a problem. 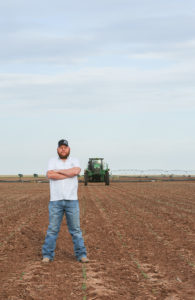 Shane McLain stands in a field of FM 1911GLT that was replanted following a big rain and a cold spell that held on for a while. In addition to their cotton and cow-calf operation, Shane and SammiJo operate McLain Custom, which
custom sprays about 50,000 acres every year.

In addition to growing cotton and keeping up with the cow-calf part of their business, Shane and SammiJo operate McLain Custom, which primarily involves ground application.

“Every year, we custom spray about 50,000 acres,” McLain says. “We provide all of the equipment and also do custom planting and pack silage for the dairies and feed yards. We’ll push more than 100,000 tons a year.

“In our area, a lot of land is being put back into native grasses. This ties in to cattle and depletion of the aquifer. We sow grass for other people and even for grazing our own cattle in the square section corners not under irrigation.”

McLain Custom employs two outside full-time workers, and at certain times in the season, 18-hour days are common. Shane and the two employees run the equipment, and SammiJo handles the bookkeeping for McLain Custom and McLain Farms.

When asked what he finds most challenging about growing cotton, McLain says it’s managing the plant’s growth.
“We put out fertilizer so the plant will grow, grow, grow, and then we turn around and apply Stance plant growth regulator to stop or slow down the growth,” he says. “Balancing those two practices seems like the hardest part of producing cotton to me.”

On the opposite end of the spectrum, McLain says the “unexpectedness” of the cotton-growing process is rewarding to him.

“A good example is the huge yield we made last year with that field of FM 1911GLT,” he says. “We knew it was going to yield well, but we never dreamed it was going to make more than 2,700 pounds per acre. Cotton will surprise you.”

McLain says he considers himself a “progressive agriculturist.”

“The agriculture industry is changing, and we must successfully change with it to succeed,” he says. “Not only do we farm, we also custom farm, operate a custom application business and raise cattle. I am continuously looking for ways to improve our operation, preserve our natural resources, and make things run more efficiently and effectively.” 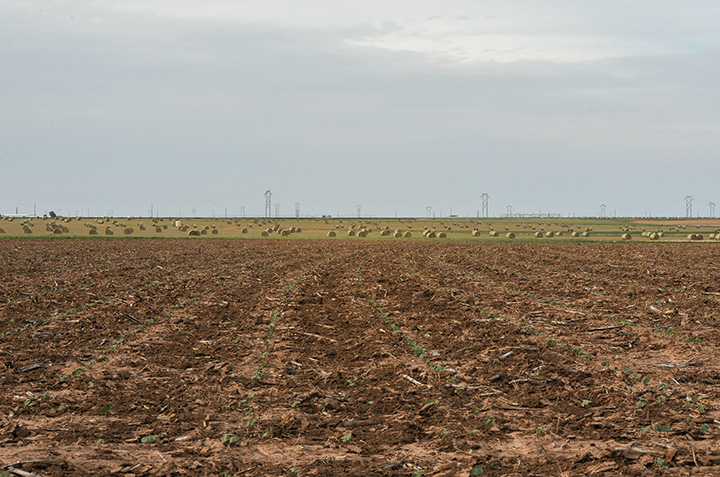