In the Southeast cotton belt, stink bugs are public enemy No. 1 year in and year out, feeding on developing seeds within the bolls, reducing yield potential and fiber quality, and promoting hardlock.

“For the Southeast, it’s been a pest that hasn’t been given as much visibility as it should have been,” says Ron Smith, Auburn University Extension cotton entomologist. “It doesn’t impact the rest of the cotton belt quite like it does here. The stink bug is the dominant economic pest on over 2 million acres of cotton in the Southeast U.S. It’s the one that causes us the most damage every year. In some fields, it’s even the first insect that requires a foliar spray during the fruiting season once we get beyond thrips.”

“I think stink bugs are probably the hardest pest you have to scout for because they’re so elusive,” he says.

Although the thresholds were released in 2010, they remain valid today, Smith says.

Scouting begins the first week of bloom by selecting bolls between 0.9- and 1.1-inch diameter. Those sized bolls are still soft, making them the most attractive for stink bug feeding that particular week, Smith says.

“You’re capturing damage that was done in the last seven days,” he says. Once bolls reach 1.25-inch diameter, they are no longer attractive to stink bugs.

Collect at least one boll per acre and no fewer than 25 bolls. Crack and examine the bolls with external lesions first for signs of internal damage, which include boll wall warts and stained seed and lint.

“The biggest problem with stink bug control is farmers are just not pulling enough bolls to sample,” he says. “That’s the most accurate scouting technique we have today, but it takes time.”

In addition to pulling bolls to look for damage, Royal says they also make 50-100 sweeps of a field as they scout to get an idea of overall stink bug numbers. 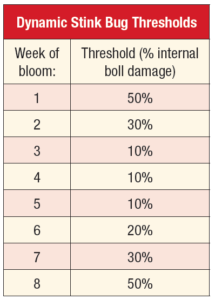 Tied to boll sampling is a dynamic treatment scale that uses higher thresholds during cotton growth stages with lower vulnerability, such as weeks 1 to 2 and weeks 6 to 9 of bloom. During weeks 3 through 5 of the bloom period, the thresholds drop to 10% internal damage.

“That’s when the biggest number of bolls are at risk,” Smith says. “As the cotton cuts out and matures, we go back and have fewer and fewer bolls at risk.”

Because of the Southeast region’s long growing season and the fact that he tries to maximize lint production, Smith likes to extend the 10% threshold to week 7 before relaxing it.

Royal says he is slightly more aggressive and will recommend treatment at 7% to 8% damage during the high-vulnerability period.

Smith says most growers in the Southeast make three applications each season for stink bugs.

During most years, Royal says his growers make two stink bug treatments annually, with Bidrin being the insecticide of choice.

The difference may be that about 90% of the corn acres in Royal’s area are sprayed once for stink bugs.

Corn is a preferred host. Once that crop begins to dry down, stink bugs move into cotton. By knocking down populations in corn, it temporarily reduces the threat to cotton.

“We spray our corn — we’re pretty proactive with stink bugs because we’ve seen what they can do,” Royal says.

Thresholds are just one part of the treatment equation. Identifying the stink bug species also is important because of varying insecticide efficacy.

The brown stink bug is found in smaller numbers throughout the Southeast. In his area of southwest Georgia, Royal says the brown is the predominate species.

A relative newcomer to the northern half of Alabama is the brown marmorated stink bug. A native of eastern Asia, it was first confirmed in Pennsylvania in 2001.

BMSB has since ravaged fruit production along the Atlantic coast and expanded its range. It feeds on more than 170 host plants that include tree fruit, almonds, hazelnuts, snap beans, tomatoes, corn, soybeans and cotton.

“They’ll feed on any size boll,” Smith says. “They’re not selective at all, so they will absolutely zero the plant out as far as bolls that are damaged.”

Unlike other stink bug species that tend to feed throughout a field, BMSB are more border feeders. The first 50 feet or so around a field perimeter may exhibit 100% damage, he says.

BMSB aggregate in the fall in large numbers, overwintering in old barns, leaf litter and nearby pine forests. In the spring, they are particularly attracted to tree of heaven, w and sassafras trees. They later move into field borders.

“If there’s any corn in the area, they’ll go to corn in the vegetative stage,” Smith says. “They’ll move to cotton when the corn cuts out,” eventually moving to soybeans as cotton matures.

The same scouting and treatment thresholds apply to all four stink bug species. Several organophosphates and pyrethroids are labeled for stink bug control.

The difference is not because of insecticide resistance, Smith says. Rather, brown stink bugs have always been slightly more difficult to control with pyrethroids.

None of the labeled products have a long residual. Unless stink bugs migrate into a field from another host, typical treatments should hold the insect pest for 10 to 14 days, he says.