The facts are clear. Cotton prices are a lot lower now than any farmer could have imagined several months ago. A year ago, everyone felt very positive about 80- to 85-cent prices.

Today, the mood is different with a price hovering in the low to mid-60s. And, to nobody’s surprise, acreage projections are down in nearly every part of the Belt.

But that doesn’t mean producers have abandoned cotton. It merely signals some different acreage shifts – particularly in the Mid-South.

Mississippi producer Justin Cariker, who farms just south of Tunica in the northern Delta, has 6,000 total acres in his operation, and this year he’ll plant 1,500 cotton acres. That is less than the 2,500 cotton acres he had in 2014.

Like many of his fellow Delta farmers, Cariker has too much invested in cotton to walk away from this crop completely. So, how will he make money on cotton in a year when prices have dropped so far?

He will rely on a formula that has helped in previous years when cotton prices were at less than ideal levels. First, he will aim for top yields. Then, he will meticulously monitor input costs and other budget items. 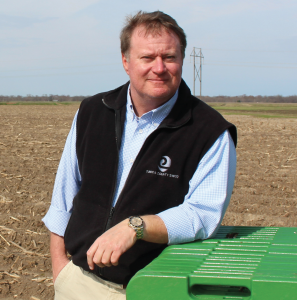 Goals Can Be Achieved
The veteran Delta producer also has hired a full-time mechanic so that he can have his equipment maintained and serviced quicker – and at a much lower cost.

“Somehow, we will survive this situation,” says Cariker, who began farming in 1990. “The one thing that we cannot do is cut expenses and jeopardize our yields.”

Under ideal conditions, his top yield for cotton will be 3.25 bales per acre, and his target is to average at least 2.5 bales on all acres. He will plant most of his cotton to two Stoneville varieties – ST 4747GLB2 and ST 4946GLB2. He also has one FiberMax variety – FM 1944GLB2.

“These varieties have worked very well for us in recent years, and I’m pretty happy with how they have performed,” he says. 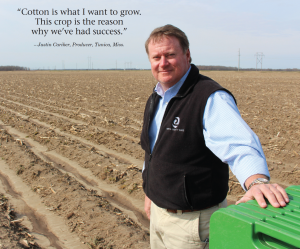 “Cotton is what I want to grow. This crop is the reason why we’ve had success.” – Justin Cariker

Perfect Fit For Varieties
According to Cariker, one of the reasons the Stoneville varieties have worked so well is that Liberty herbicide can be sprayed over the top. That, in turn, has helped in the battle against resistant pigweed.

In fact, Cariker goes a step further in his efforts against this dreaded weed. He spends $20 more per acre in herbicide applications to make sure he stays ahead of outbreaks.

He purposely uses three overlapping residual herbicide applications in an effort to create maximum effectiveness. His acreage is 85 percent irrigated and utilizes both center pivots and furrow systems.

And, even though gin rebates will probably be down in the $20 to $25 range (per bale), that is still another valuable source of income.

Are there other ways to be more efficient? In Cariker’s opinion, there are many. For example, being precise in all aspects of herbicide spraying is crucial. Calibration needs to be exact – whether it’s on a ground rig or in an airplane. Any amount of savings can add up in a hurry. When an outsider views the scope of Cariker’s operation, it’s easy to envision how those efficiencies could actually be achieved.

A quick scan of the farm reveals seven tractors, two cotton harvesters, numerous trucks, eight center pivots and 20 irrigation wells. Cariker sees ways to save money in each of these areas in the farm operation.

Another factor that should help the operation survive the current low-price cotton environment deals with finances. Cariker has an excellent relationship with his ag lender at First South Farm Credit. In fact, he has had the same loan officer for 20 years.

“I don’t think I would want to go to a commercial bank for my business,” he says. “At First South, I feel more comfortable, and I know that this company understands our situation.”

An additional financial area to be considered is insurance costs. Cariker has decided to have only liability insurance on equipment that he does not use as much. Because insurance is costly, he figures to save money by doing this.

Staying Efficient
It all comes down to being as efficient and timely as possible for the Cariker farm. Everyone who works in the operation is committed to implementing this philosophy – no matter what the task. Now, it’s a question of starting the season by planting cotton (and the other crops) on time.

“Like I said earlier, we will get through this,” says Cariker. “Next year, I hope I’m sitting here talking about higher prices. Cotton is what I want to grow. This crop is the reason why we’ve had success.”

He also likes to be philosophical about a farmer’s mindset when going through difficult circumstances.

“I have heard older folks tell me that you have to capitalize during the tough times,” he says. “That is when the weak may fall. But, we need to be strong enough to make it. That’s the approach I’m using.”

Print & Email
2015-04-01
admin
Previous: The Global Cotton Industry: A Look At Its Past With Insight Into Its Future
Next: A Trip To Texas Is Always Special