Although researchers are gaining a better understanding of the fungal pathogen that causes target spot, they admit they still have a lot of unanswered questions.

Unlike many pests, where growers treat once a threshold is reached, deciding when to apply a fungicide for target spot isn’t that easy and involves meeting a series of conditions. Even then, obtaining a yield response isn’t a sure thing.
“It’s a difficult disease to work with, but the big thing is we’re not having to fight people who say the disease doesn’t matter any more,” says Dr. Bob Kemerait, a plant pathologist based at the University of Georgia’s Tifton campus. “Now rather than defending ourselves, we can focus on when it’s most likely to cause yield losses and what can be done about it, which is a giant step.”

He was referring to earlier disagreements among some researchers over whether target spot was a disease of economic importance for Southern cotton growers.

Complicating matters are the differences in cultural practices, environmental conditions and varieties between the Mississippi Delta and the Southeast. That means results from target spot trials conducted in one region aren’t necessarily applicable to the other, says Dr. Tom Allen, an Extension plant pathologist with Mississippi State University’s Delta Research and Extension Center in Stoneville.

Cotton producers in Alabama and Georgia, for example, typically plant on narrower, 36-inch rows, and many use overhead sprinklers, which increases humidity levels under the canopy. Prolonged leaf wetness and high humidity create an environment ripe for disease development.

Parts of the Mississippi Delta experienced similar conditions in 2016 because of cloudy weather and nearly daily rains during July and August. Whether those conditions occur again this season in the Delta is anyone’s guess.
“Throw out everything you learned last year, because this year is going to be different,” says Allen, who is part of a multi-state target spot research effort. “I think the hard part about target spot from a cotton standpoint is it seems like treatments may be much more effective in the southeast part of the country. From a response perspective, our results in Arkansas, Louisiana and Mississippi have been more hit and miss.”

Getting Closer To An Answer
Kemerait, who has been working on target spot in cotton for more than 15 years, says researchers are getting closer to gaining a handle on the disease. He credited Cotton Incorporated for funding much of the target spot research.

“The biggest thing that’s happened for us is target spot is now considered a disease of importance,” he says. “Now we can ask the question, ‘When is it most important and when is it most profitable to spray?’ We’re refining what are the best recommendations.”

Before making an application, he says growers need to ask the following questions.

When in the season are you beginning to see target spot? The earlier the symptoms, the more likely growers will see a yield response with a fungicide spray.

“Typically if we’re seeing significant disease by about the third or fourth week of bloom — even into the fifth week of bloom — we can still see a measurable response from fungicide,” Kemerait says. By the sixth week, it’s too late to matter and producers have missed the application window.

Based on trials, Kemerait says a single fungicide application at the proper timing is the most critical, although he hasn’t always seen a yield response. If the disease is present early and is spreading quickly, then two fungicide applications — one at early bloom, followed by another two weeks later — may be the best option.

Strobilurins had been the fungicide of choice. Because of resistance concerns, Kemerait says Priaxor, a premix of Headline (pyraclostrobin) and Xemium (fluxapyroxad), is now his recommendation.

“We’re concerned and very much aware of how plastic and prone to resistance this organism is,” he says.

 What variety are you growing? No cotton variety has natural resistance, although some varieties are more susceptible to target spot than others. “If you think this is a problem of (Phytogen) 499 and if you don’t plant 499 you don’t have to worry about target spot, you’re making a big mistake,” Kemerait says.

 What crop was planted in the field the previous year? Trials have not been conducted to confirm whether target spot spores can survive from one season to the next by overwintering on leaf liter. Based on observations, Kemerait says target spot tends to be worse in fields where cotton is followed by cotton, especially if the grower is using reduced or conservation tillage. Splashing rain or irrigation can spread the spores from the leaf litter onto plants.

Target Spot In The Delta
Unlike the Southeast coastal region, where target spot has been a perennial problem for several years, the Mississippi Delta has not had to contend with the disease year in and year out. In three years of trials, Allen says he has yet to see a yield benefit with a fungicide application at first bloom followed by a second application two weeks later.
The plots were managed to encourage disease development by promoting rank growth and therefore did not receive a plant growth regulator.

What Allen has noticed in many plots is target spot isn’t the only pathogen — fungal diseases frequently occur as a complex. During 2016, many Mississippi producers reported a heavy boll load on plants. About five weeks after bloom, they started finding target spot, the plants began to shed bolls and growers blamed it on that disease.

Allen says it’s hard to tell what role target spot played in the boll drop without knowing what other diseases were present and not discounting the overall role of the environment. Cotton growth and development are generally reduced by extended periods of overcast weather.

Based on his work in the Delta, he says cultural management may be more important than fungicide applications in reducing target spot.

Nitrogen management also is critical, since applying more nitrogen than the plant needs can promote excessive vegetative growth, Allen says. At least in the Southeast, target spot seems more prevalent in strong fields where producers are pushing the plants to maximize yield potential. 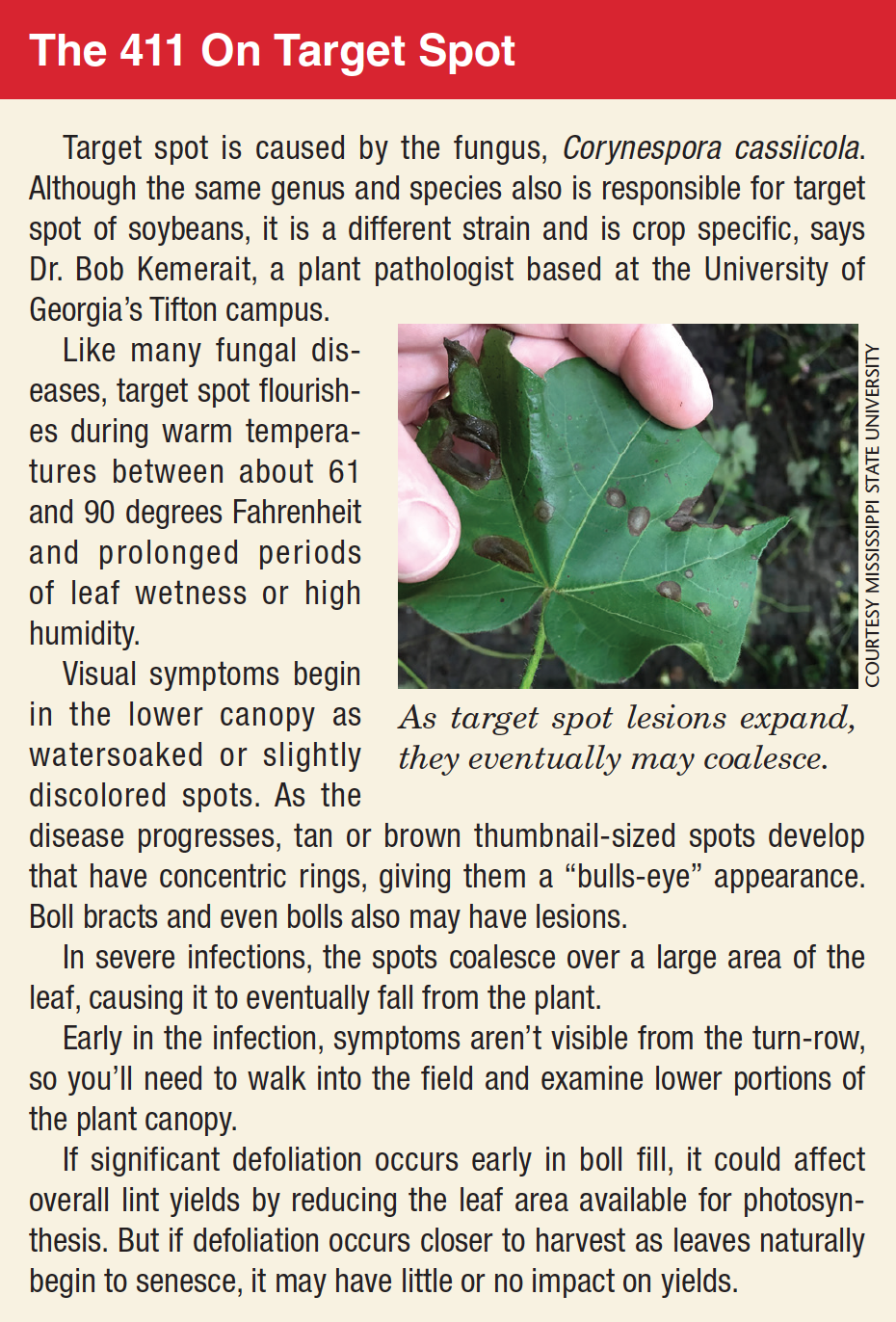