Texas producer Steve Verett, who also is executive vice president of Plains Cotton Growers, Inc., has seen his share of unpredictable crop conditions in recent years. But he remains hopeful that this could be the season when things finally turn around in his region.

Just what is “typical” anyway?  That seems to be a debatable question here on the High Plains, where the last three years have been anything but. Even the last good year, 2010, also was not “typical,” with the area’s highest production and lowest abandonment in recorded history. As executive vice president of Plains Cotton Growers, Inc., a cotton producer organization representing thousands of hard-working farmers in 41 counties on the High Plains, I’ve noticed that the word “typical” is gradually creeping back into our vocabulary. And as a farmer, I’m especially thankful for that.

Strangely enough, 2013 actually was one of my best years on our family operation, Verett Farms, where I grow cotton with my son, brother and nephew. We benefitted from timely rains that allowed us to have a decent dryland crop and some of the most exceptional irrigated yields we’ve ever had. Certainly, that was not a “typical” year for us, and it wasn’t for many other growers, albeit for different reasons.

The 2014 crop year has been a season of hope. If “typical” were to mean “average,” current acreage and production estimates say we’re about there. However, “typical” certainly does not mean perfect, by any stretch. It doesn’t mean success for everyone.

We have had our share of ups and downs this year. The season didn’t get off to the best start. Winter and spring were not kind to us in terms of precipitation, and it looked like we might be in for yet another really rough season, especially for our area dryland crop, which accounts for about 60 percent of our planted acreage.

We’re on the home stretch. And I don’t think I’ve ever been happier with “typical,” because it means that we’re finally back in the game.

Timely Rains Helped Crop
But then, on Memorial Day weekend, the skies opened with rainfall like we haven’t seen in years.

The timing and the amount couldn’t have been better for some growers, the rainfall coming just in time to establish a cotton crop. But for some, including me, it was more than a little excessive. Ten inches of rainfall in a single weekend does not bode well for newly planted cotton. We had to start over. But it was tough to complain. We needed this moisture desperately.

Then it was off to the races for the 2014 High Plains cotton crop. After that Memorial Day weekend rain, we had a couple of more precipitation events in June. However, July and August were largely dry, squelching the opportunity for tremendous yield potential in much of our area.

We have been fortunate not to lose too many acres to hail, but the lack of timely rainfall once again has caused crop failure in some portions of our service area. In a strange dichotomy, too much rainfall has caused failures this year, as well. 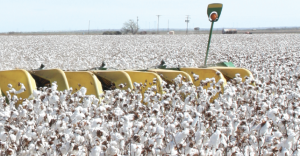 The rainfall, while welcomed with open arms from a crop development and soil moisture standpoint, also revealed a new problem for the Texas High Plains – resistant weeds. We’ve had evidence of resistance since 2012, and growers have implemented aggressive weed management strategies designed to curb the spread, but the dry weather had helped prevent the large scale, general outbreak we feared…until now.

In spite of trying to do everything right – using both pre-emergent and post-emergent herbicides, monitoring fields and destroying suspicious weeds as soon as possible – they persist, and growers collectively have spent no telling how much more money than they “typically” spend on weed management, trying to rid their fields of this unwelcome inhabitant.

Typical Season Is Good News
So whatever you may consider “typical,” all of this equates to a projected 3.8 million bales of cotton to be harvested here in 2014. If that comes to pass, that will be right around our 10- year average yearly production.

For our organization, and especially our infrastructure, we need “typical.” Gins need cotton to process. Warehouses need cotton to store and ship. Our oil mills need the seed. As farmers, we are fortunate to have a crop insurance program that has helped us get through these tough times, but while we certainly have suffered losses, we’ve been able to live to see another day. Many businesses simply would not be able to absorb one more year like the last three.

Even as I write this in mid-September, it’s raining outside. I’d rather it be warm and sunny right now to finish out this crop, and there’s still a lot of time left between now and harvest. I can only pray that those production estimates will come to pass, but the potential is there. We’re on the home stretch. And I don’t think I’ve ever been happier with “typical,” because it means that we’re finally back in the game. 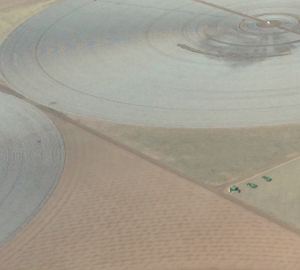 Texas High Plains Harvest Ready To Kick Into High Gear This Fall
Barring anything unusual in the coming weeks, the Texas High Plains is looking at a harvest of about 3.8 million bales this year. That is near the region’s 10-year average, and it is good news for producers who have dealt with serious drought, acreage abandonment and difficult conditions in the last three years.

The sight of gigantic circles of cotton (left) being harvested will be a welcome sight in the coming weeks as farmers try to deliver this crop to the gin in a timely manner.

Steve Verett, executive vice president of Plains Cotton Growers, Inc., will be doing double duty during this time of the year. He’ll continue to guide PCG, which represents thousands of farmers in a 41- county area. He will also be dealing with his own farming operation in Ralls, Texas. He and his son (Kristofer), brother (Eddie) and nephew (Heath) manage a 4,000- acre operation.

The recent rainfall in the region brought on by moisture from hurricanes in the Pacific has definitely affected when farmers can begin harvest. But hopes remain high in these final weeks.

So, is this the end of the drought in Texas and a return to more normal conditions? Verett can’t say for sure, but he does know that 2014 will be better than the previous three years when drought conditions severely affected the state’s cotton crop.

Steve Verett is executive vice president of Plains Cotton Growers, Inc., in Lubbock, Texas. Contact him via email at steve@plainscotton.org.