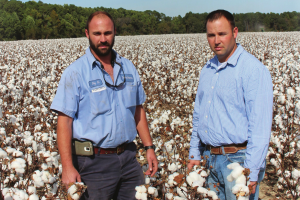 How important is cotton production in Georgia? And is it still a viable commodity when prices dip into the 60- cent range? Those are legitimate questions to ask any farmer growing the crop in 2014. And you can count on the Davis brothers (Kenny Ray and Allen) in south central Georgia to answer those questions quickly and directly. Yes, they are concerned about low prices. Yes, they are hoping for a bump in prices before planting begins in the spring of 2015. And, yes, they are staying with cotton for a very good reason. It continues to be one of the most consistent crops produced in the state each year.

Even when prices have fluctuated to low levels in the past, cotton yields always delivered at high levels. This kind of performance can often offset low prices. And there is also   the value of the cotton-peanut rotation for both crops.

That, in a nutshell, is why the Davis brothers will never quit growing cotton on their family farm in Ben Hill County.

“The driving factor will always be high yields,” says Kenny Ray, the older of the two brothers. “That’s how you overcome low prices. If you want to stay in this business, you have to make good yields.”

As mentioned earlier, the brothers’ strategy never changes. They are relentless in achieving maximum profits for the farm.

As they have done in previous years, they planted several varieties in 2014 – including Stoneville’s ST 6448GLB2, which has been the pleasant surprise of all their varieties in recent seasons.

The ST 6448GLB2 variety was planted to some small acreage in 2013 and did well enough that the Davis brothers planted more of it in 2014.

“We had good luck with this variety last year, and it was our top yielder and did about 1,750 pounds per acre,” says Kenny Ray. “We think it will do even better this year.”

This variety apparently is a custom fit for the sandy soils of the Davis farm. It is a full-season variety with excellent vigor and good plant height.

Allen says the current price environment doesn’t discourage either brother. They can remember the persistence of their father and grandfather who dealt with hard times. Low prices are often part of the equation for cotton.

“Hitting these yields is our top priority, and we will do whatever it takes to achieve those yields,” he says.

Eliminate The Variables
From a purely financial standpoint, the brothers seek to eliminate all variables

that might affect their cotton. They have fought the pigweed problem for nearly eight years, and their efforts have paid off.

By using a residual herbicide program, applying Liberty over the top and vigilantly monitoring fields, this nemesis is under control. But maintaining those clean fields comes at a high price. Even using this proven approach, the farm’s overall herbicide program will cost $70 to $80 per acre.

The Davis brothers also have a major investment in spraying for stinkbugs, thrips and nematodes, which are an annual problem in most parts of Georgia.

They have had success in using site-specific Telone applications to control nematodes. They also have used a Veris rig and soil samples to determine where nematode populations might exist.

Another major step for the farm was the use of grid sampling to gain a better understanding of soil variability in all of the fields.

Commitment To Cotton
Both Kenny Ray and Allen are confident that Georgia will remain consistent in its cotton production. Currently, it ranks as the second-largest cotton-producting state in the Belt with nearly 1.2 million acres planted in 2014.

The brothers believe the state will continue in its commitment to cotton because farmers are willing to embrace technology to maintain high yields. For example, the Davis farm now uses the John Deere on-board module picker, and that has improved harvest efficiency and cut labor costs.

“The round module picker is an amazing piece of machinery,” says Allen. “It definitely makes us more efficient, and that, in turn, helps our bottom line.”

Allen’s brother echoes those comments in an emphatic way.

“I’ll put it this way,” says Kenny Ray. “I’m not going back to the old way of picking a crop. If it ever gets to the point where I can’t afford one of these machines, I’ll go get somebody to pick the crop for me.”

In the final analysis, the Davis brothers will be the first to suggest that being a financially profitable farm requires all facets of the operation to work well. It starts with a seed variety that performs. But it also involves excellent management.

“Don’t forget about hard work and long hours,” says Allen. “You have to be willing to put in the time. In the end, it pays off.”

Nobody knows that better than the Davis brothers’ consultant, Brandon Phillips, who has worked with them for 13 years.

“They watch every dollar they spend,” he says. “And they have gradually implemented precision agriculture to make sure they achieve those maximum yields.

“We’ve seen the highs and lows through the years but still are committed to cotton. This is the crop that brought us to where we are today. We have to embrace technology, or we’ll get left behind. It’s that simple.”