The Truth About Nematodes

Sometimes The Yield Reflects What Is Invisible To The Eye

If you are a cotton farmer, what you can’t see can hurt you in terms of reduced yield and delayed crop maturity. Plant-parasitic nematodes are tiny worms — most of which are invisible to the naked eye — that infect the roots of cotton plants.

Clemson University nematologist Dr. John Mueller has studied these pests for years and is well qualified to discuss specific and big picture truths about nematodes in regard to cotton.

He says you can drive by a field where nematodes are present and not notice anything unusual going on until the damage translates into a yield loss at the end of the season.

But if you walk a nematode-infested field, you are more likely to see the unevenness of the crop or patches where the cotton plants are yellowing, wilted and stunted.

“Yield losses of 10% within a field are common and often go unnoticed,” Mueller says. “And yield losses in an individual field can exceed 50%.”

He shares some truths about nematodes and the damage they can cause.

■ Nematodes can occur on and cause yield losses in most soil textures. Effects on plant growth and yield increase if plants are under moisture or heat stresses, so they are worse on soils with coarse, sandy textures.

■ Nematodes often occur in scattered patches. These areas develop more slowly than the rest of the field. This makes crop maintenance, including herbicide application and especially defoliation and boll opening, difficult. Often “yield” is in the field but lost due to late maturity.

■ You cannot eliminate nematode damage by simply irrigating more. The damage from nematodes often blocks the vascular system so no matter how much soil moisture you have, the plant is still not taking up all it needs. 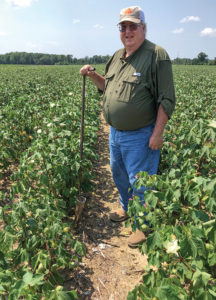 Nematodes are not the same; there are different species, such as root-knot, reniform, lance and sting. Although nematicides can work across different species, they typically are put out at planting and kill nematodes during the first week or two after that, Mueller says.

Another tip to effectively combat nematodes is to know what species is present in each field. The best way to make this determination is to pull soil samples and have them tested for nematodes at a lab.

Mueller recommends sampling by cropping history. Make note of whether the sample comes from a corn area, a soybean area or a cotton area. Nematode sampling techniques, which are different than sampling for nutrient analyses, should also be followed. Here are some rules of thumb:

■ Take a predictive sample after harvest to allow most state laboratories to use their nematode thresholds.

■ Place the core sampler directly into the row. Insert the sampling tube into the soil about three inches from the stalk. You should feel roots snap as the probe goes into the soil.

■ Store samples in a cool spot out of the sunlight. Do not put them on the dashboard of your truck. However, they should not be allowed to freeze.

■ Send the samples as quickly as possible to the nematode laboratory. They do not need to be shipped in a cooler with ice if they are sent in a package with numerous samples and the outside temperature is not extreme.

Another factor to consider as you put together a multi-year nematode management plan is to understand how nematodes move within and between fields. In general, any physical means that moves soil will spread nematodes.

The most common carrier is equipment that picks up soil particles. Nematodes can be spread via mud on vehicle tires or by implements such as discs and planters or any other equipment that is inserted into the soil.

“Old cultivators used to be the worst culprits,” Mueller says. “Anything that carries dirt from place to place helps them move around.”

Other means by which they move include wind, water that carries soil, and even birds and mammals. The Clemson nemotologist emphasizes that flooding will not “kill off” nematode populations.

“Nematodes don’t have lungs,” he says. “They can’t drown. But every time a flood dries down and drains off, it’s carrying nematodes with it.”

Mueller’s parting advice is to sample every field and then develop a crop rotation to initially knock down nematode numbers.

Once you have gone through this process, then plant a resistant variety specific to the nematode species that is present, he says.

“If you still have high numbers, you may want to add a nematicide, but hopefully you have reached the point where you can control nematodes just with resistance. You have to have a two- to three-year plan. Effective nematode control is not a one-time thing.”

With a growing focus on yield-robbing nematodes and the push to control them, PhytoGen has been working to commercialize varieties resistant to specific species of this pest.

“PhytoGen is bringing traits for resistance to reniform nematodes,” he says. “We also have a good foundational product with regard to other pests we are managing, such as weeds and diseases.”

Woodward says the company has been working on this piece of the trait puzzle for several years in-house.

“We now have the opportunity to highlight the technology and do proof of concept work to show we have the yield and have observed the benefits of nematode reductions,” he says. “I believe the reniform nematode is an increasing problem of importance that people don’t appreciate until if affects their farms.”

Woodward says a limited amount of the seed will go to PhytoGen Horizon Network growers in 2020, followed by a full commercial launch in 2021.