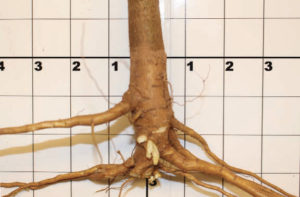 Soil compaction can result in J-rooted cotton, which may ultimately reduce yields — photo by Dan Fromme

In the past couple of growing seasons, soil compaction has been a hindrance in many fields across Louisiana. Soil compaction is evident by reduced crop growth and development in fields and confirmed by inserting a penetrometer into the soil.

Soil compaction is the compression of soil particles that reduces pore space, thus creating a dense layer of soil that can impede plant root growth. It can be caused by heavy machinery traffic and horizontal tillage operations when the soil is too saturated.
There have been instances where a deep vertical till implement was used to alleviate a soil compaction layer only to create a new one less than 4 inches deep in the row middle when the rows were re-bedded. This was probably because the soil was too wet.

Soil compaction reduces crop rooting ability, restricts water infiltration rate, reduces the volume of soil that plant roots will be able to mine for essential nutrients and ultimately can reduce yield.

Machinery size is steadily increasing and will only lead to more frequent soil compaction issues.

Fields where compaction could be an issue show reduced crop growth rate, early season nutrient deficiency symptoms, and crop wilting in certain areas of the field and not in others.

Compacted areas can be identified especially during periods of cool weather early in the growing season when the crop develops at a reduced rate compared with the rest of the field with a similar soil type.

You can test for compaction layers by probing the soil (tops of beds or rows) in several areas of a field using a soil penetrometer.

To mark the depth of the compaction zone, push the penetrometer down to the compacted zone and place a finger where the probe meets the soil surface.

As a guideline, use the penetrometer when there is sufficient soil moisture for planting. Also, make sure that deeper compaction layers are not present. To avoid soil compaction, limit field operations when soils are too wet. This can be difficult in Louisiana, but creating hardpans will reduce yield. Deep vertical tillage is the fastest method to alleviate soil compaction layers.

Fields with soil compaction layers should be identified and deep broke this fall when soil moisture conditions are favorable to lift the soil so the hardpan can be disrupted.

This article is courtesy of the LSU AgCenter and authored by Josh Copes, Dennis Burns, R.L. Frazier and Dan Fromme.