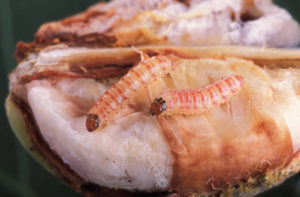 The National Cotton Council issued a news release in which it welcomed the U.S. Department of Agriculture’s announcement that “U.S. cotton is free — after more than 100 years — of the devastating pink bollworm.”

Agriculture Secretary Sonny Perdue, who made the announcement at a ceremony in Washington, DC, says the pink bollworm has cost U.S. producers tens of millions of dollars in yearly control costs and yield losses.

In USDA’s news release at https://bit.ly/2EAuDJX, Perdue states that, “thanks to rigorous control and regulatory activities carried out by USDA, state departments of agriculture, the U.S. cotton industry, and growers, the pink bollworm has been eliminated from all cotton-producing areas in the continental United States. As a result, USDA is lifting the domestic quarantine for pink bollworm, relieving restrictions on the domestic and international movement of U.S. cotton.”

Perdue says cotton producers were critical to this success, banding together to carry out a coordinated, multi-state program and shouldering 80 percent of the program’s cost. That effort, he says, “demonstrates the value of partnership, investment, and putting our research close to and beside the farmers we serve.”

In California, the integrated pink bollworm program involved trapping of cotton fields and mandatory winter plow-down to ensure a host-free period. Fred Rinder, deputy agriculture commissioner from Fresno County, California, says he is still waiting to hear from the state about whether these programs will continue in light of Purdue’s announcement.

Rinder recommends producers proceed as if plow-down is still in effect so they won’t be caught in a time crunch should the state announce the requirement’s continuation later this year. 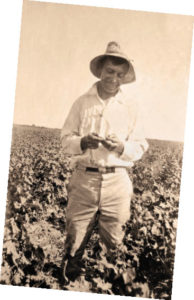 According to USDA, the pink bollworm was first detected in the United States in Hearne, Texas, in 1917 and by the mid-1950s, the pest had spread to surrounding states. It eventually reached California in 1963. In 1955, USDA’s Animal & Plant Health Inspection Service (APHIS) established domestic pink bollworm regulations.

At the height of the program, 10 states (Arizona, Arkansas, California, Louisiana, New Mexico, Oklahoma, Texas, Nevada, Mississippi and Missouri) were quarantined for this pest. Many of these infestations were suppressed through cooperative federal, state and industry programs. By 2003, only Arizona, California, New Mexico and Texas remained under regulation.

NCC President/CEO Gary Adams, who also participated in the ceremony, says the council appreciates the united effort of its producer members, the dedication and coordination of APHIS staff, the collective contributions of many scientists, and the federal funding support from Congress that enabled USDA-APHIS to complete this monumental task.

“The pink bollworm, a destructive insect pest of cotton that once required multiple insecticide applications while continuing to reduce yields, is no longer present in U.S. cotton production,” Adams says. “The benefits of this program are shared by society, the environment, and the united producer membership who led this battle to victory.”

University Of Arizona Weighs In

University of Arizona entomologists and Cooperative Extension specialists made key contributions to a recent landmark achievement announced by the U.S. Department of Agriculture. The agency says the pink bollworm has been eliminated from all cotton-producing areas in the continental United States more than 100 years after the voracious insect was detected.

Researchers at the UA College of Agriculture and Life Sciences and Cooperative Extension have been studying the pink bollworm, one of the world’s most devastating crop pests, for decades. Before its eradication, the invasive insect often completely destroyed cotton fields despite growers’ efforts to control them with insecticides.

“The eradication of the pink bollworm is a great achievement that will benefit cotton growers throughout Arizona and the Southwest,” says Bruce Tabashnik, who heads the UA Department of Entomology and is a member of the BIO5 Institute. “This stunning success came from decades of teamwork, with effective collaboration among growers, biotech companies, the USDA, the Arizona Department of Agriculture and University of Arizona Extension and research scientists.”

The UA conducted early testing on Bt cotton, which is genetically engineered to control pink bollworm by producing caterpillar-killing proteins from the bacterium Bacillus thuringiensis. The Bt proteins are not toxic to people or wildlife.

UA entomology specialist Peter Ellsworth participated in the testing and led the development of integrated pest management programs for cotton. Since 1996, UA scientists have led a resistance management program that has been essential in suppressing the pink bollworm and stopping it from developing resistance to Bt cotton in Arizona.

Tabashnik led the establishment of the “refuge strategy,” the primary approach used worldwide to delay the adaptation of insect pests to genetically engineered crops.

Cotton growers have not had to spray for pink bollworm since 2008. That fact, combined with integrated pest management programs, has saved growers more than $20 million per year while increasing their safety and improving environmental quality.

A team of entomologists from the UA and the USDA was recently awarded a USDA grant to continue pink bollworm research in Arizona through 2021. The researchers hope to gain a better understanding of pink bollworm resistance to Bt cotton that has evolved in India and other parts of the world. Therefore, if the pest is reintroduced to Arizona, the tools will be in place to defeat it again.