Melvin Clanton – Thrives In The ‘Hills’

For anyone unfamiliar with cotton production in Mississippi, two primary regions exist – one in the Delta and another in the Hills. They are distinctly different and require special approaches for growing the crop.

The Delta is adjacent to the Mississippi River and covers an area stretching from Memphis south to Greenville. The Hills constitute a region extending from the north central part of the state east toward Alabama.

Producer Melvin Clanton farms 1,200 acres just east of Grenada about 100 miles due south of Memphis, and he has learned what it takes to deliver consistent crops in the Hills. He started going to the fields with his father when he was four years old and made the big decision to return to the family farm in 1995 after earning a degree from Mississippi State University.

“This is my 19th straight year to be farming here in the Hills,” says Clanton. “I owe everything to my father. He taught me how to be a good farmer.” 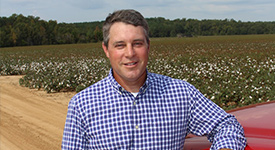 In Search Of Water
Clanton says the big difference in his farming is that all acres are dryland. He depends on timely rains to keep his crop progressing throughout the season. And how does a farmer in the Hills survive in such an environment? Clanton says it’s all about having a realistic yield projection and accurate budget. He also has to be very precise in choosing varieties suited for silty loam soils.

This year, Clanton planted DP 1137 B2RF and DP 1321 B2RF on his cotton acreage. Barring anything unusual, he’s hoping for yields around 1.75 bales per acre. On some of his early planted cotton, he expects two-bale yields, which is what his cotton has averaged for the past two years.

Are there other unique challenges in the Hills region? Unfortunately, wild hogs and deer pose a serious problem. Many fields in this region are small and near wooded areas where an abundance of wild animals roam. Because he also produces corn, soybeans and wheat, this “problem” isn’t likely to go away anytime soon.

Optimistic Outlook
When Clanton views his entire operation, he feels optimistic about what he has learned since those early days in 1995. He and his wife Andrea run the operation with the help of four workers and a scout, Colby Parker.

Like many other cotton producers today, the young Mississippi farmer is concerned about current cotton prices and how they will affect his planting intentions for 2015.

Clanton also is hoping that his region can steer clear of any unseasonable rain as harvest season approaches. A cotton farmer’s major goal now is for a dry fall as a late crop tries to catch up.

“That’s what I’m hoping for right now,” he says while surveying one of his fields. “At this point, we don’t need any surprises.”