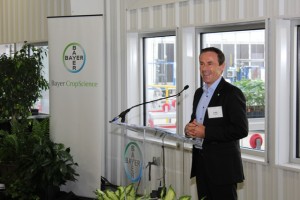 Liam Condon, president of Bayer CropScience, makes remarks at the dedication ceremony of the new research facility in Memphis, Tenn.

Bayer CropScience recently celebrated the grand opening of its newest research facility, a $17 million, 76,000- square foot, state-of-the-art greenhouse and headhouse addition to its site in Memphis, Tenn. The site is a hub for cultivating cotton and soybean solutions for the international market.

The greenhouse, located at Agricenter International, is part of Bayer’s commitment to invest in research and development and capital expenditures, as well as expand global production capacities and seed breeding facilities from 2011 until 2016.

The new greenhouse includes a spacious headhouse and open office area and will accommodate research to increase the number of traits available for cotton varieties in the United States and international markets. Overall, the Memphis site supports all of the company’s brands, including Stoneville and FiberMax, as well as soybean breeding, molecular breeding and numerous stewardship management programs. For additional information, interested persons can visit www.bayercropscience. com.

First Bale Of Cotton Delivered In South Texas
It was a record-breaking year for the First Bale of cotton in South Texas, and it sold for $18,500, including add-ons and a $3,000 dollar donation at the First Bale Auction and Scholarship Fundraiser event.

The official certified First Bale of cotton in the United States was delivered to the La Feria Co-op gin by the Ruiz Brothers of Mid-Valley Ag. The bale was eventually sold to Bayer CropScience, Helena Chemical and Neuhaus and Company for $10,500.

The Ruiz Brothers received the $3,000 from the Harlingen Cotton Committee for the First Bale, which weighed 1,500 pounds. The variety used was FiberMax’s FM 1830 GLT. For more details, interested persons can call the Harlingen Chamber of Commerce at (956) 423-5440.