A member of the NCC’s 2001-2002 Cotton Leadership Class, Fountain served as an NCC vice president from 2016-2018 and an NCC director in 2011. He has been on numerous NCC committees and has been the chairman of its Quality Task Force since 2016. Since 2010, Fountain has served as a director of Cotton Council International.

He and his wife, Missi, live in Screven, Georgia, and have two sons.

Six individuals whose leadership and service have brought distinction to the state’s largest business sector were recognized recently as Class XXXIII of the Arkansas Agriculture Hall of Fame.

They include ag aviator and longtime chairman of the Arkansas State Plant Board George Tidwell, Lonoke, and Tuskegee Airman and retired Cooperative Extension agent Thomas Vaughns, Marianna. Another new class member is Gene Woodall, a retired University of Arkansas faculty member who paved the way for crop yield increases by creating verification programs emulated around the world.

Posthumous induction occurred for timber landowner and philanthropist Jane Ross, Arkadelphia, and Gene Sullivan, who served as state conservationist in three different states and guided key water management programs. The late cattleman and banker Leo Sutterfield, Mountain View, who served as chairman of the Arkansas Beef Council and a member of the Arkansas Farm Bureau board of directors also was inducted posthumously. 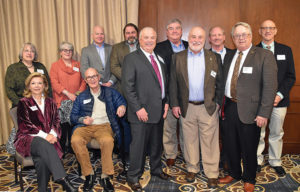 Eddy Cates, an independent crop consultant from Marked Tree, Arkansas, was recognized as the 2019 Cotton Consultant of the Year during the CCOY award reception at the Peabody Hotel in Memphis, Tennessee.

He is the 38th recipient of the award, sponsored by Syngenta and Cotton Farming magazine. To read more about him and his consulting business, go to www.cottonfarming.com and click on the Cotton Consultant of the Year button.

Cates says his career as a crop consultant has always provided a good life for him and his family.

“I have been blessed to learn from and work for some great people in the agriculture industry,” he says.